After the big game yesterday my Blitzer 'Bubo' was lucky enough to roll a double 5 on the Skills Table. This allows me access to the Mutation table and what a lot there is to consider. I love the idea of the Rats mutating. Its all that time spent in the sewers - you just don't know what is going to happen. 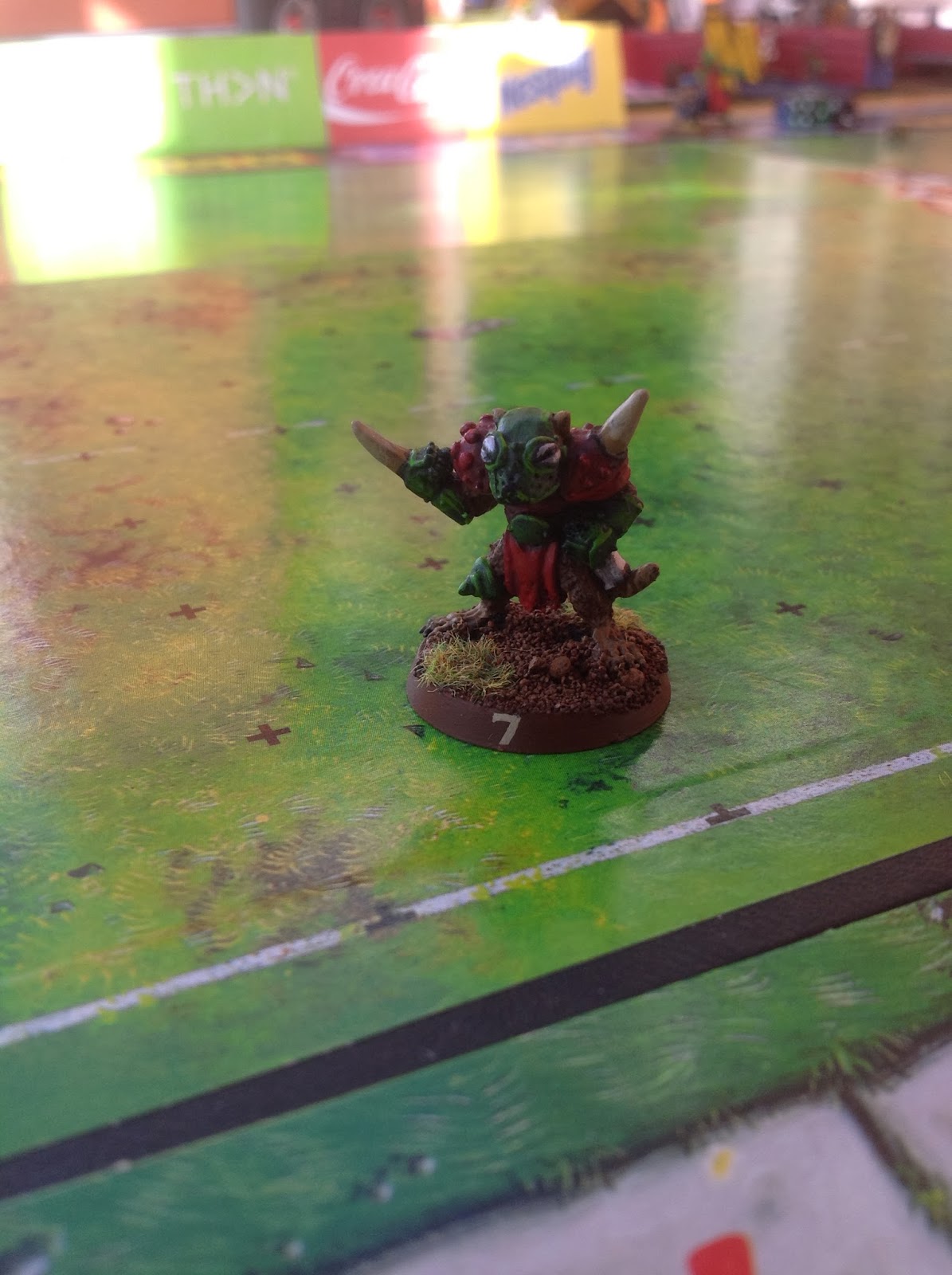 Big Hand - used when picking the ball up. You ignore the negative modifiers of enemy tackle zones. Now if a gutter runner had this - big smiles. Maybe even the Thrower but the Blitzer will be used to hit people and not ball carry.

Claw - Any roll of 8 or more will break armour. Would be good against terms with high armour e.g. the Orcs. At the moment I am playing against Dark Elves and Undead. So - not really any good for me. Would only make a difference when hitting Mummies - and I don't like doing that at the best of times!

Disturbing Presence - if I am within 3 squares any player trying to Pass, Intercept or Catch must subtract 1 from the result of their die roll. This would be great against passing teams and I could see a Gutter Runner who was tasked with man marking taking it but not my Blitzer. It could be useful if I kept him close to the opposition cage as it would make it harder to Throw but ...

Extra Arms - Add 1 to the die roll when picking up, catching or intercepting. Good for the Thrower or a Gutter Runner but not the Blitzer.

Foul Appearance - In order to take an action against a player with Foul Appearance you must first pass a 2+ D6 roll. This could be considered for the Blitzer.

Horns - Add 1 to strength when Blitzing. Would combine well with Mighty Blow.  Turn him into a Killer Blitzer. Also the purpose of a Blitzer to make gaps in the line for the Gutter Runners to take advantage of. Currently I am doing this by moving forward a Gutter Runner / Lineman to be adjacent to the player I am going to Blitz. Then I Blitz using 2 Block dice. Hopefully this creates a hole that the other Gutter Runners can take advantage of. With Horns I would not need to use the support player. I would most likely still have the use of 2 Block dice. In effect this releases that player for other duties. Very valuable.

Prehensile Tail - subtract 1 from Dodge rolls if passing through my tackle zone. Could be interesting but there is not a lot of Dodging going on against me at the moment.

Tentacles - Used against Dodging. The opponent rolls 2D6, adds his player strength and subtracts my strength. On a 5 or less the player is held firm by the Tentacles and his action ends. This would be good on a high Strength player like an Ogre. Not for the Blitzer.

Two Heads - Add 1 to all Dodge Rolls. How fabulous for a Gutter Runner but not my Blitzer.

Very Long Legs - Add 1 to your score for intercept or leap. In order to be useful you would really have to have the Leap skill as well. I think that it would be good for a Gutter Runner. It could be used for Cage bashing. Emmm. Leap allows you to jump to any free square upto 2 squares away. There is no Dodge roll to leave your current square with all those potential tackle zone modifiers. You make a straight Agility roll. For my Blitzer that would be 4+. Very Long legs would it a 3+. If successful you continue your move. An interesting possibility. Jumping over a line of players to put the Blitz on the ball carrier. The Blitzer has access to Strength and General skills. Leap is an Agility skill so I would need to roll another double to get Leap. Not very likely. Agility is a normal skill for the Gutter Runners so that be an interesting combination for them.

I can also consider Agility and Passing skill sets. I had a look at Leader. This gives an extra reroll. They can be very useful indeed. Even a basic Dodge might be worth a thought.

Also the result of rolling a double 5 is 10. That would grant me plus 1 to MA or AV. The AV might be worth consideration. Armour of 9 just like the Orcs. He would be a lot harder to remove from the field of play. I only have the option to take 2 Blitzers and they play an important role so keeping them on the field of play is vital.

So that is a quick discussion on the options. My thoughts are that Horns or AV+1 are the main contenders. But I am always interested in other thoughts so all feedback gratefully received.