So I suppose we must start with the army list. What did Zagdakka take to capture the communications array?

Plan = Battlewagon contains the 15 Boyz, Painboy, Mek and Warboss. Mek number 2 is with the Mega Nobs.

Mekgunz would shoot the flyers.

Weirdboy would deploy depending on what skills he obtained, probably with the 20 boys.

Use the Battlewagon to shelter the 2 Trukks, march the boys up the board, use the Waaagh on turn 2, have the Stromboyz and Buggies arrive turn two. Chaos should ensue as we come at the Iron Fists from the front and rear. Simples. The footsloggers should arrive to mop up at the end.

There were no flyers.

We rolled for mission type etc and ended up playing short table edge to short table edge with the communications array right at the back of the board. In short a funnel with and extra 12"s of distance for me to travel. Nerves began to jingle.

I rolled for my Weirdboy and joy of joys Da Jump and Power Vomit! Giggling like a mad person I put the Weirdboy with the large group of 20 Slugga Boys and set them up at the back of the board well out of range, ready to Teleport behind enemy lines. None of that running malarky for my boyz!!

You see, Ghazghkull was right. 'Eadcrumpa had a 'special' purpose!! Ghazghkull knows everything. Never doubt the great one.

Below are the set-up positions. (Buggies and Stormboyz in reserve) 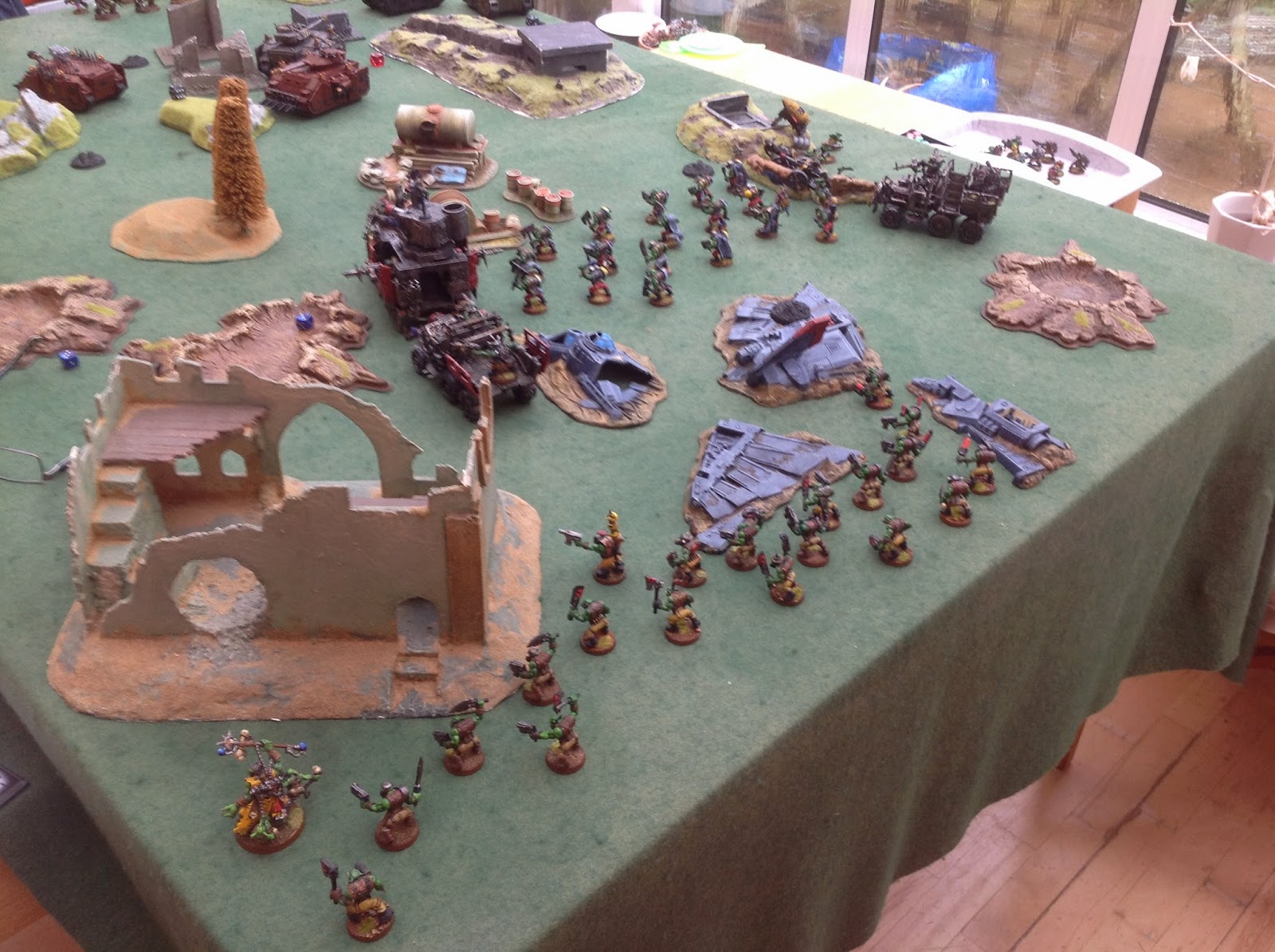 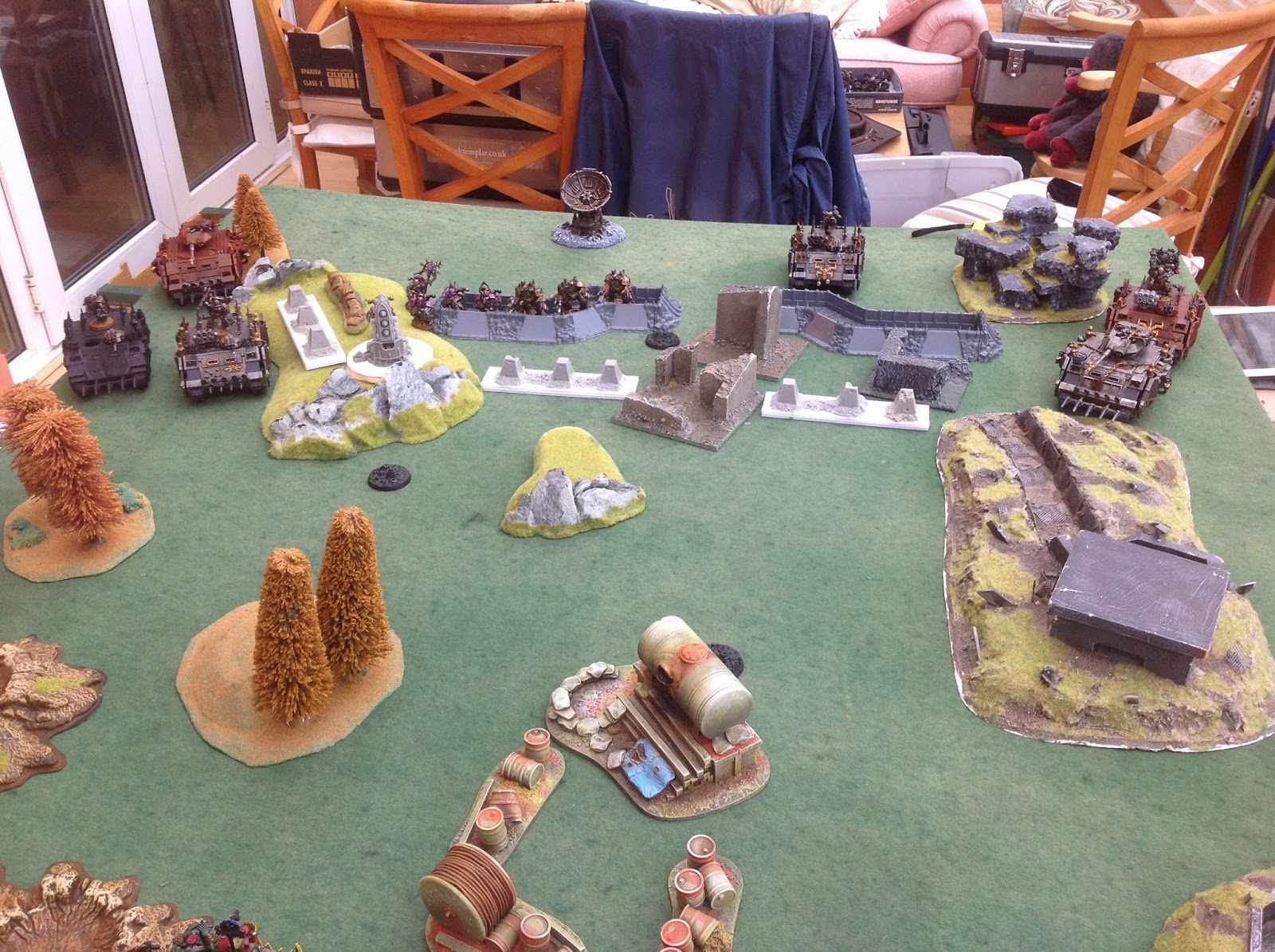 You can see what I mean about a funnel. The Iron Fists had purchased Tank Traps to stop my vehicles and then had Fortifications behind that. These were anchored with tanks on either end. The Fortifications were manned with Oblitorators and Noise Marines. Things looked very hot down there!

I got to go first and decided to go for it in a big way. I pushed everything forward and went for Da Jump straight away. I figured it would be amazing if it came off. I also checked my movement to allow the Killkannon to go for a big shot at the Oblitorators. Guess what - it worked!!! 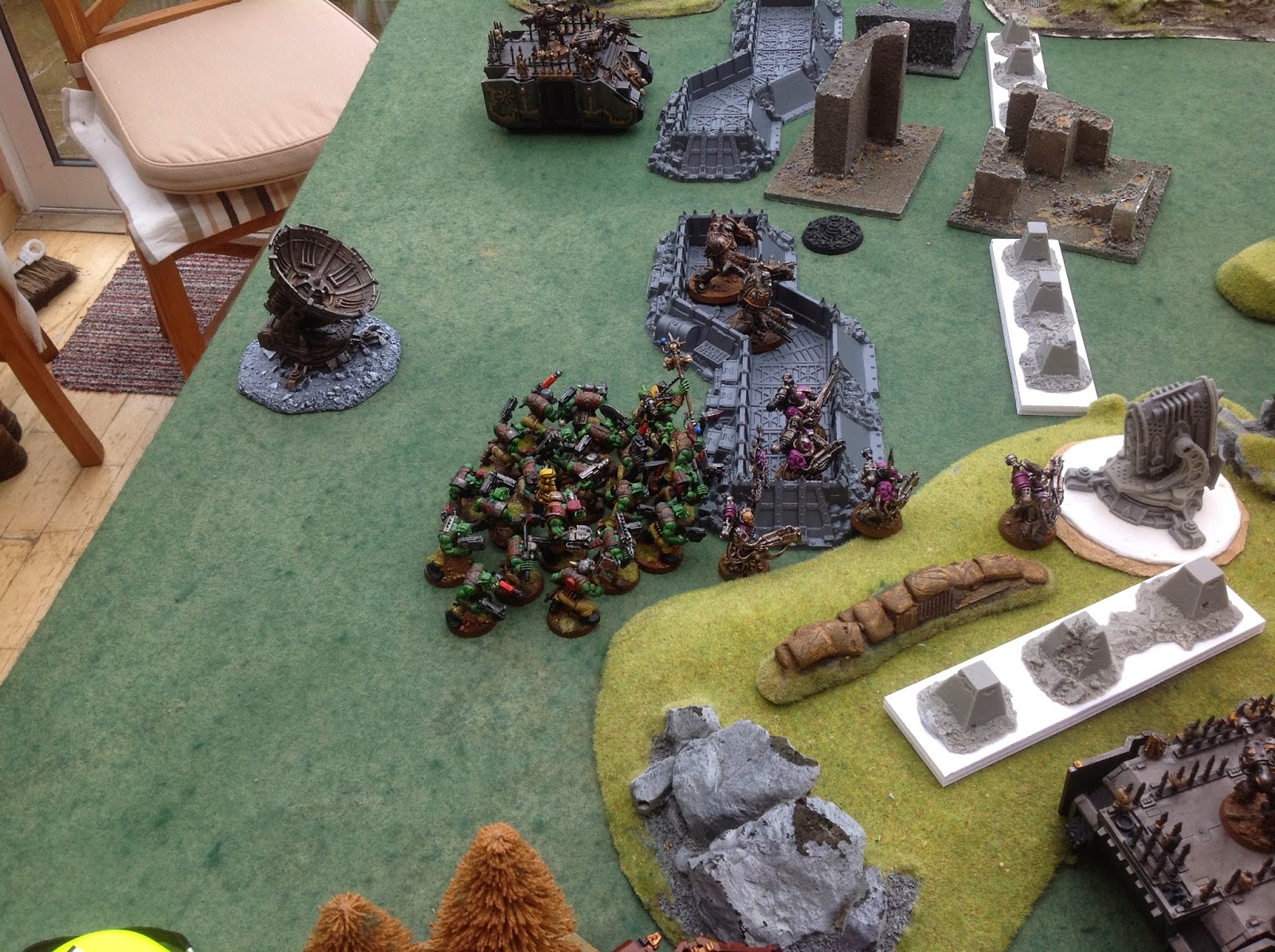 But then I got spanked for being too ambitious. Unit wiped out to a man as I was surrounded and shot to pieces. At least they were not shooting at the advancing force.

My reserves arrived in turn 2. 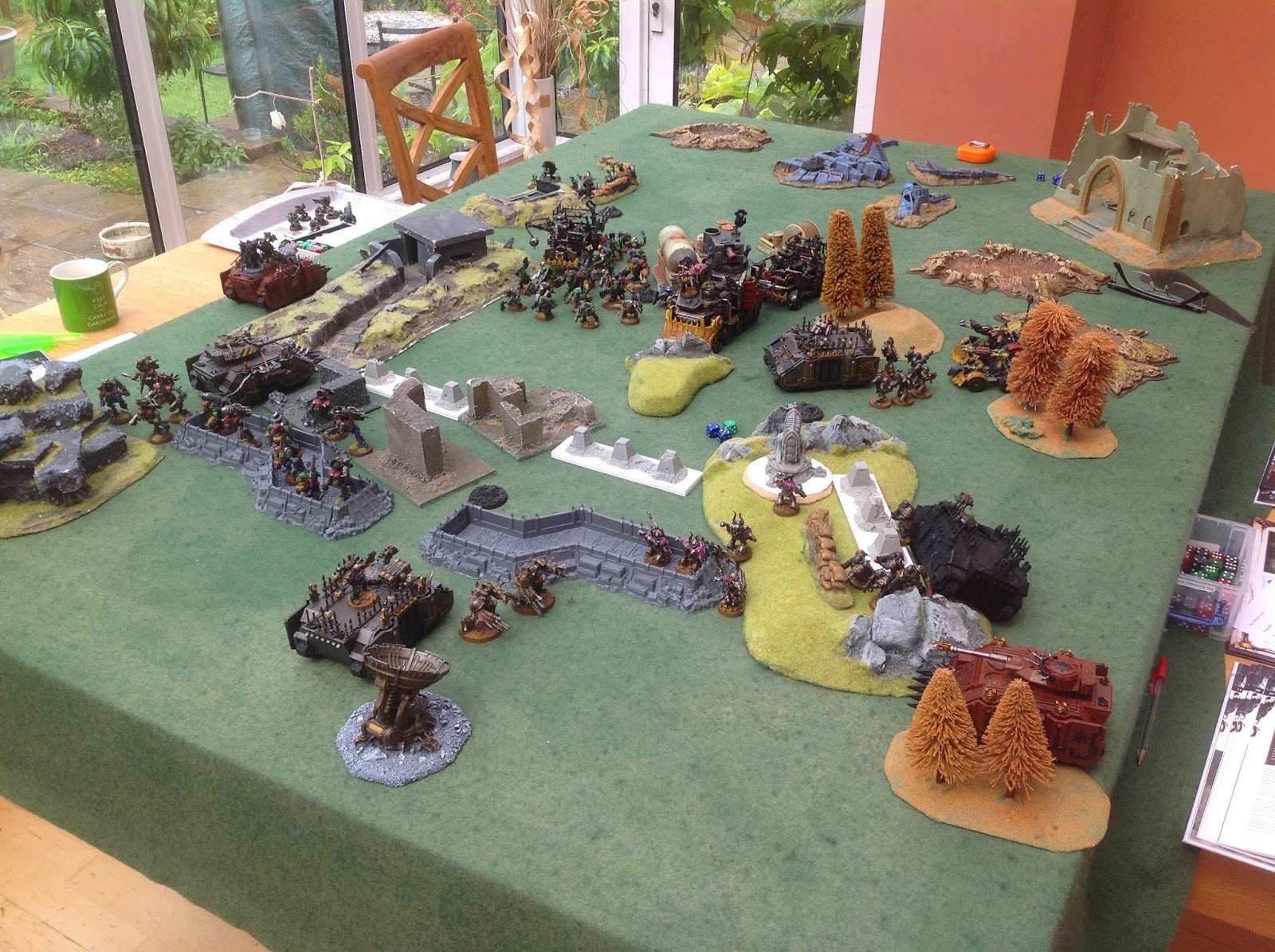 But I was not close enough to support them and guess what I got shot to pieces. Again, at least they were not shooting at the advancing force.

Time for the Waaagh!! 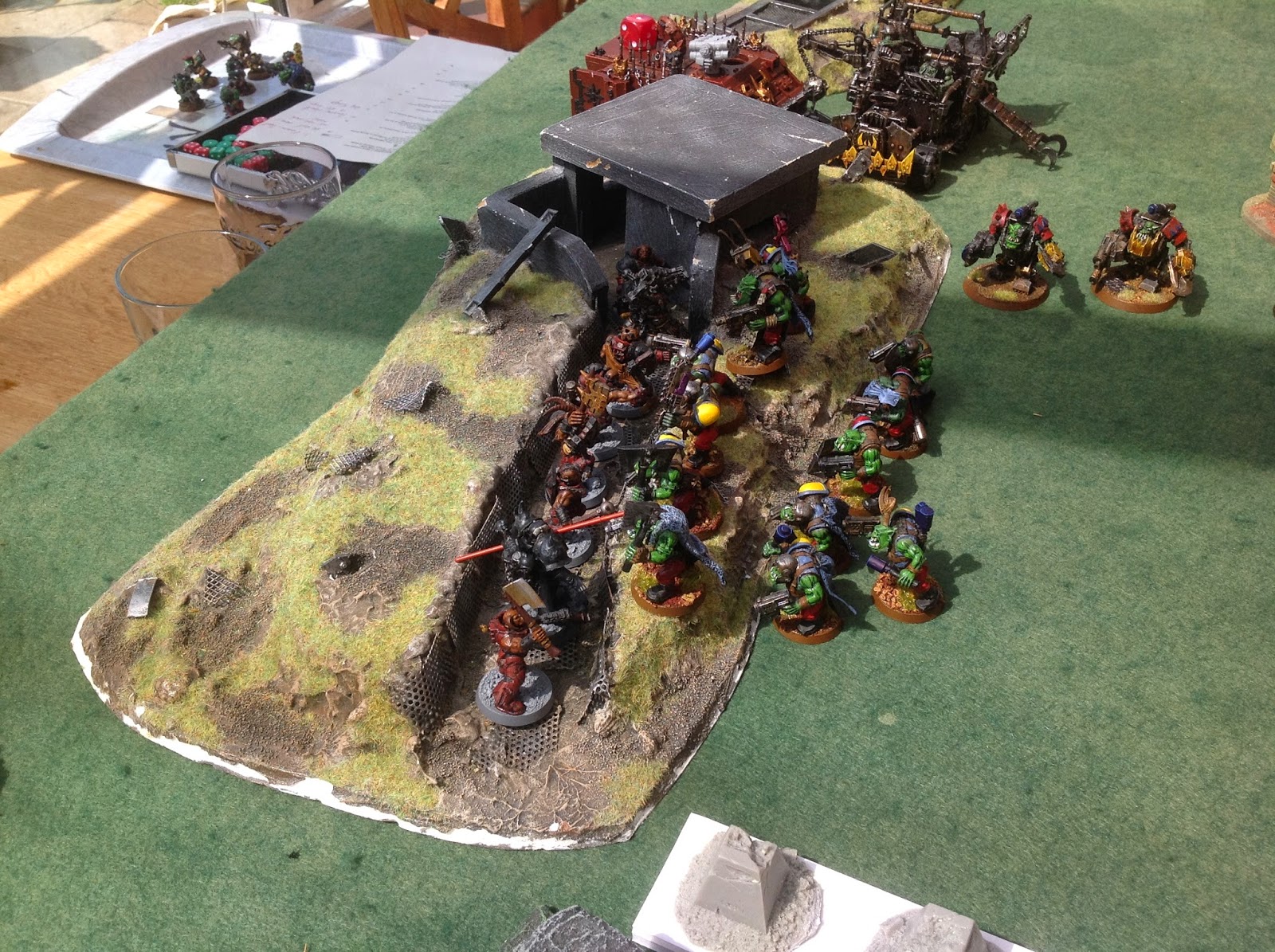 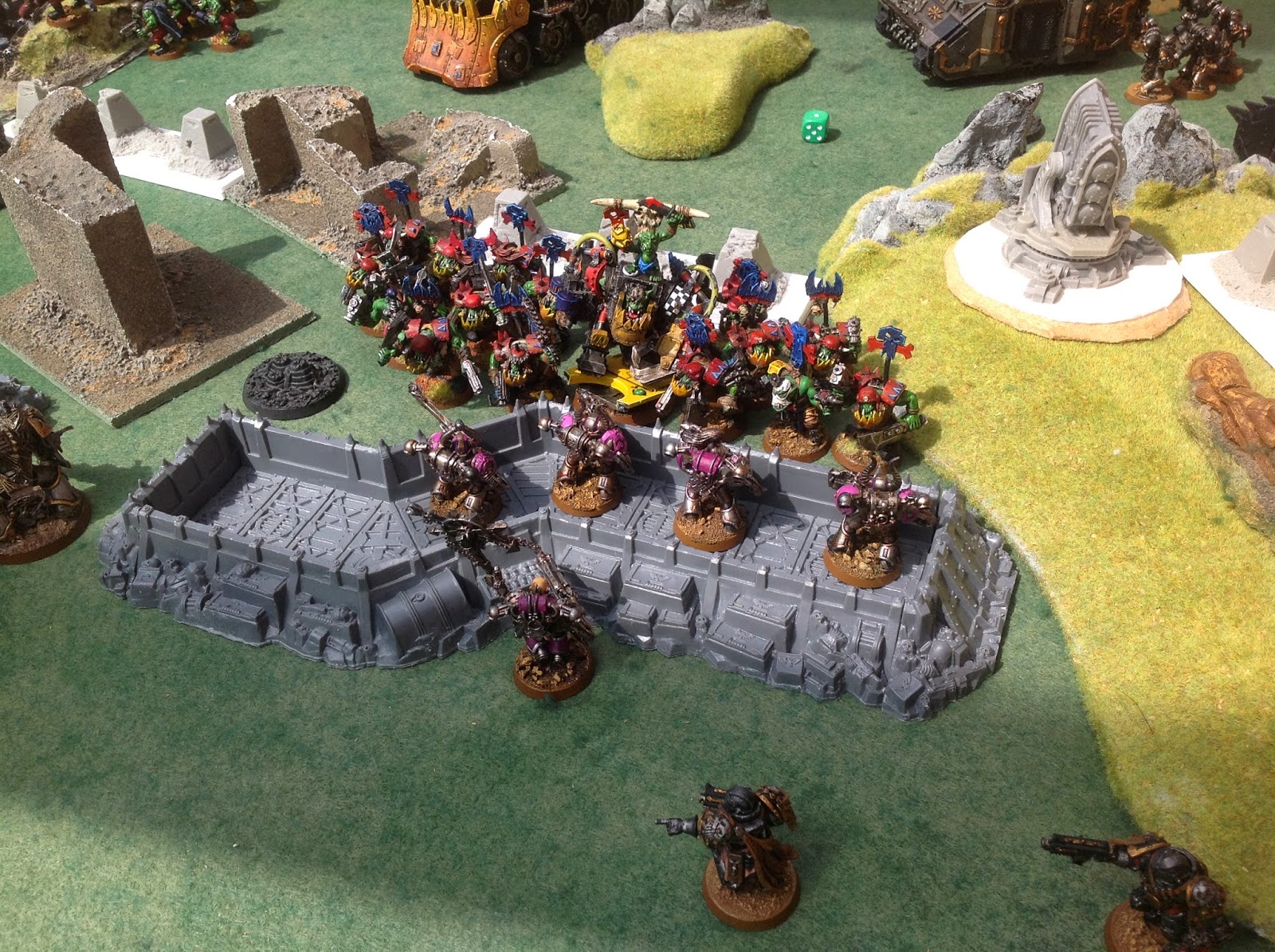 And in my main thrust for glory, I pushed my HQ down the throat of the enemy. This was it - my time had come - or so I thought.

Noooo - the 'Ighlanders were cut to pieces first by shooting and then at the wrong end of the Initiative sequence. I only had three guys left to hit with. Dreadful.

My HQ advanced and cut down a 5 man unit and then I could not move into the next unit. I had to stand there to be shot at. This seemed so wrong. 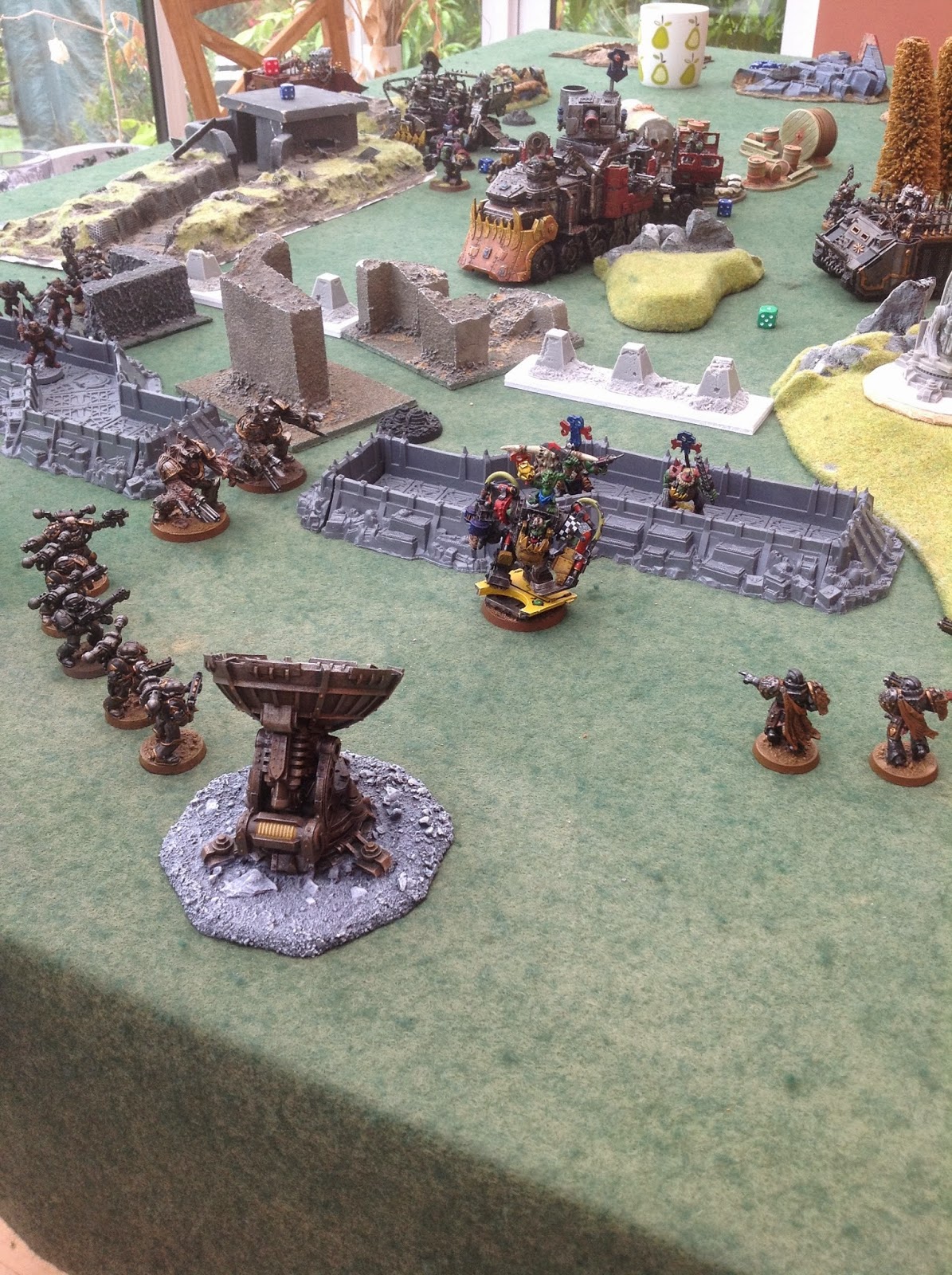 So my 'Ighlanders were no more and a the end of the Iron Fists shooting I had 3 guys left in my HQ. The Warboss, the Painboy and one of the Slugga Boyz. Look how close I am to the communications array, but it seemed like those few feet might as well be a few miles.

Then the Obliterators and  2 Iron Fists units attacked in the Assault phase. Go Zagdakka - you can get there!!! 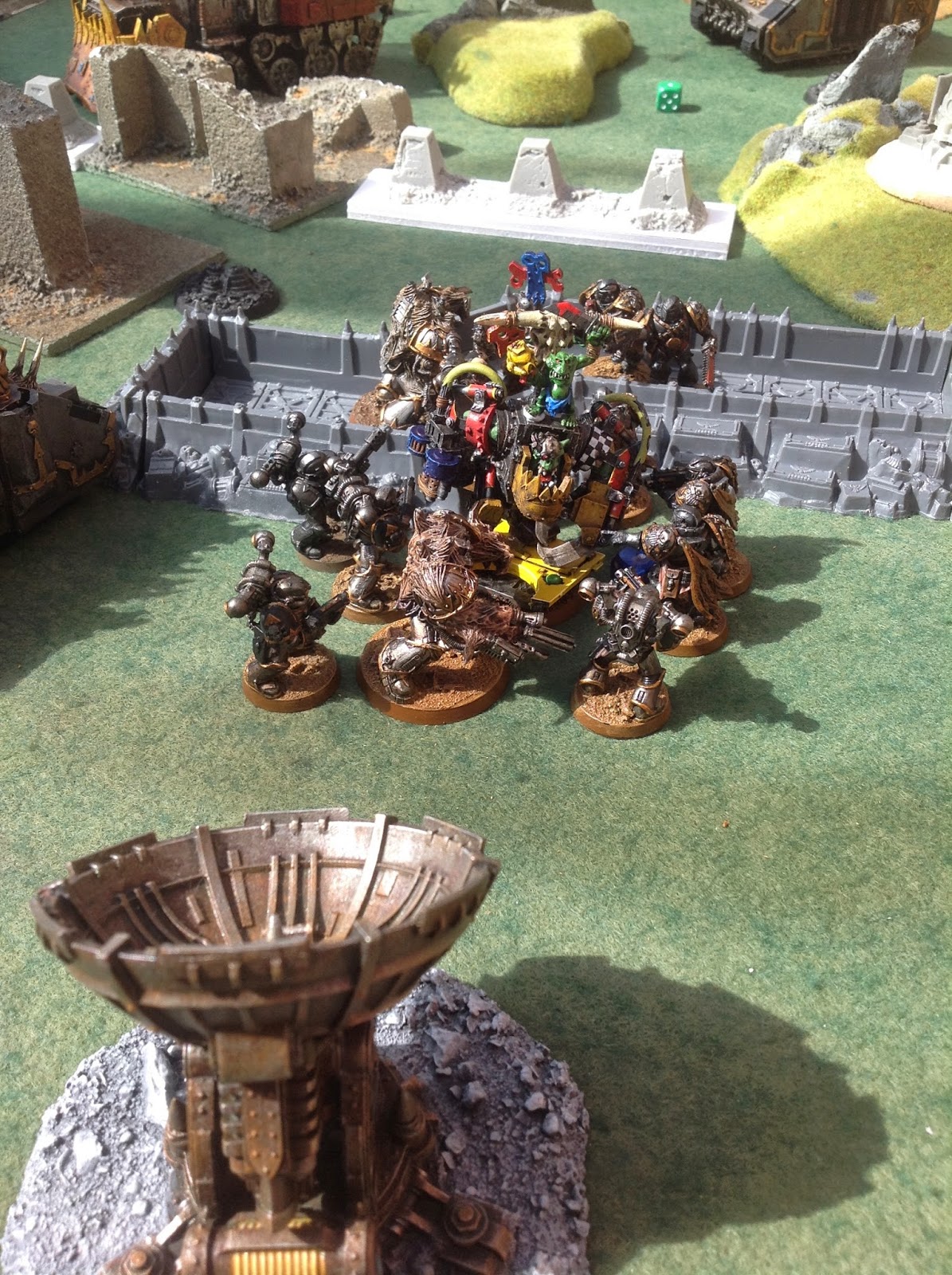 I looked like I was in trouble but up stepped 'Zagdakka the Unmerciful'. Utterly amazing!! 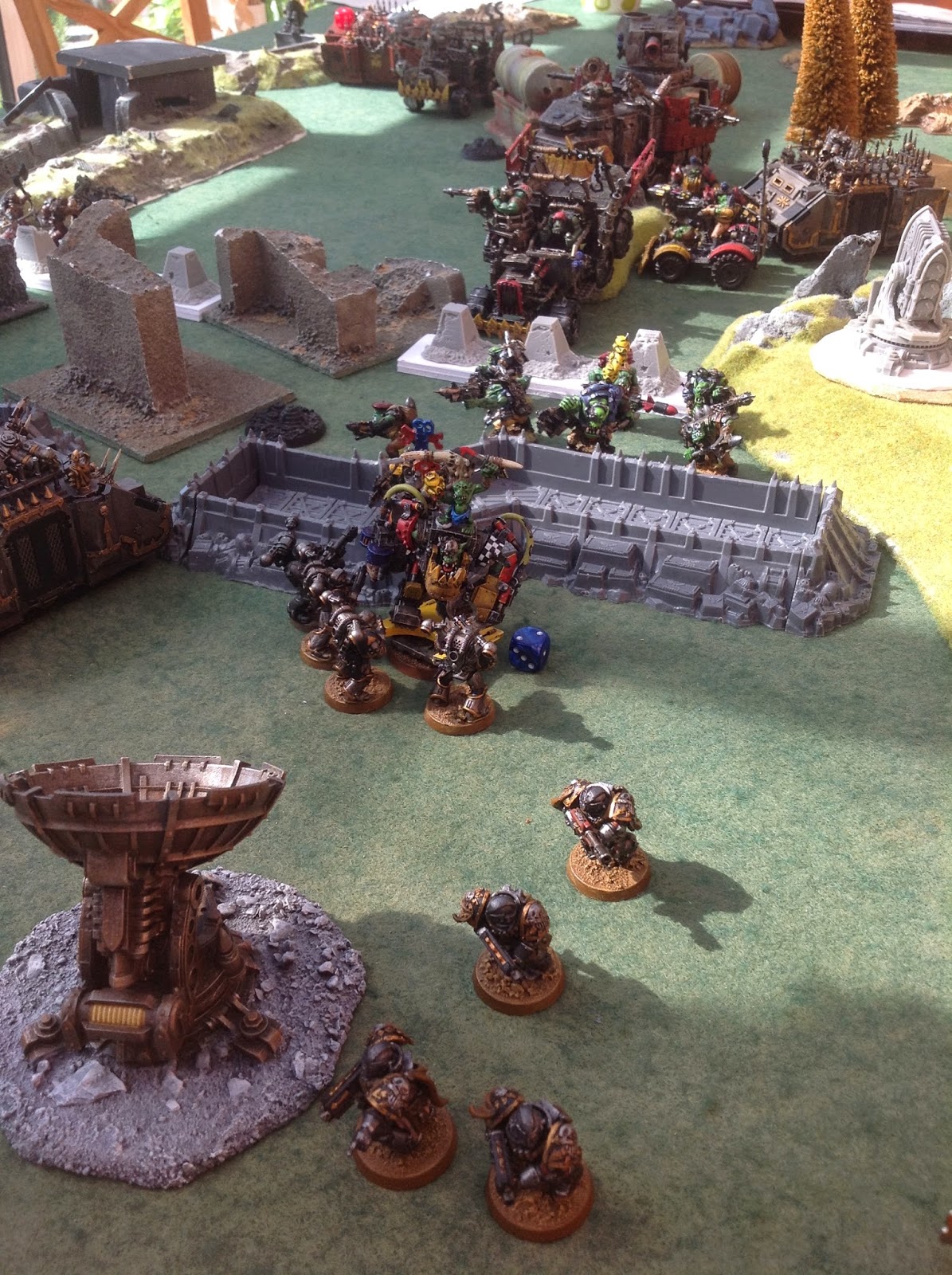 He saw off the Oblitorators and broke the morale of one of the Iron Fist units before finally seeing off the remaining unit. Then the Tankbustas arrived to get in the final act of the day - owning the communications array! 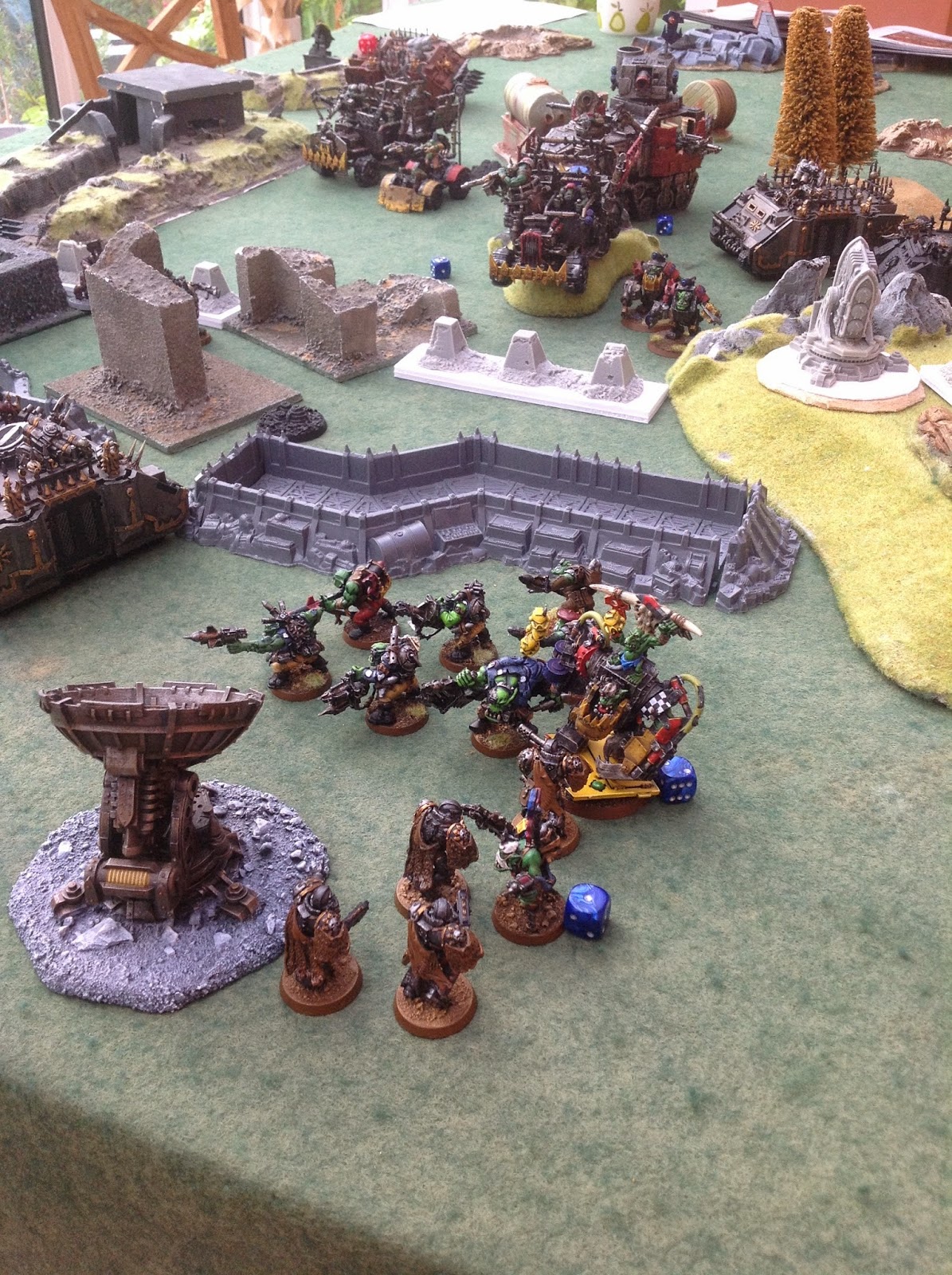 It was a great moment. The Painboy was invaluable. My Warboss was amazing. We had a real blast and a hugely enjoyable day.

The game has changed a lot!! Like a lot. There is much to muse on - but for today I would like to say a great big thank you to the Dark Tamplar for what was a fantastic Sunday. 40k - we salute you!!