Zagdakka had launched the Waaagh with great success. The inter planetary communications array had been taken and this bought time. The Iron Fists were trapped without the means to call for reinforcements so Zagdakka could call down the Heavy Support. The next target would be the Forge. Intelligence reports that it is heavily fortified and defended by the forces of Nurgle.

In truth the rumours were that Typhus himself would lead the defence and this was a potential blessing. Reports of Typhus in action against the Dark Angels questioned his willingness to get directly involved in the action and begged the question - has he Gone Yellow?

Either way Zagdakka knew that this would be a tougher nut to crack and as he surveyed the many weapons of destruction being assembled his eyes fell to the new heavy walkers. Emmmm...... 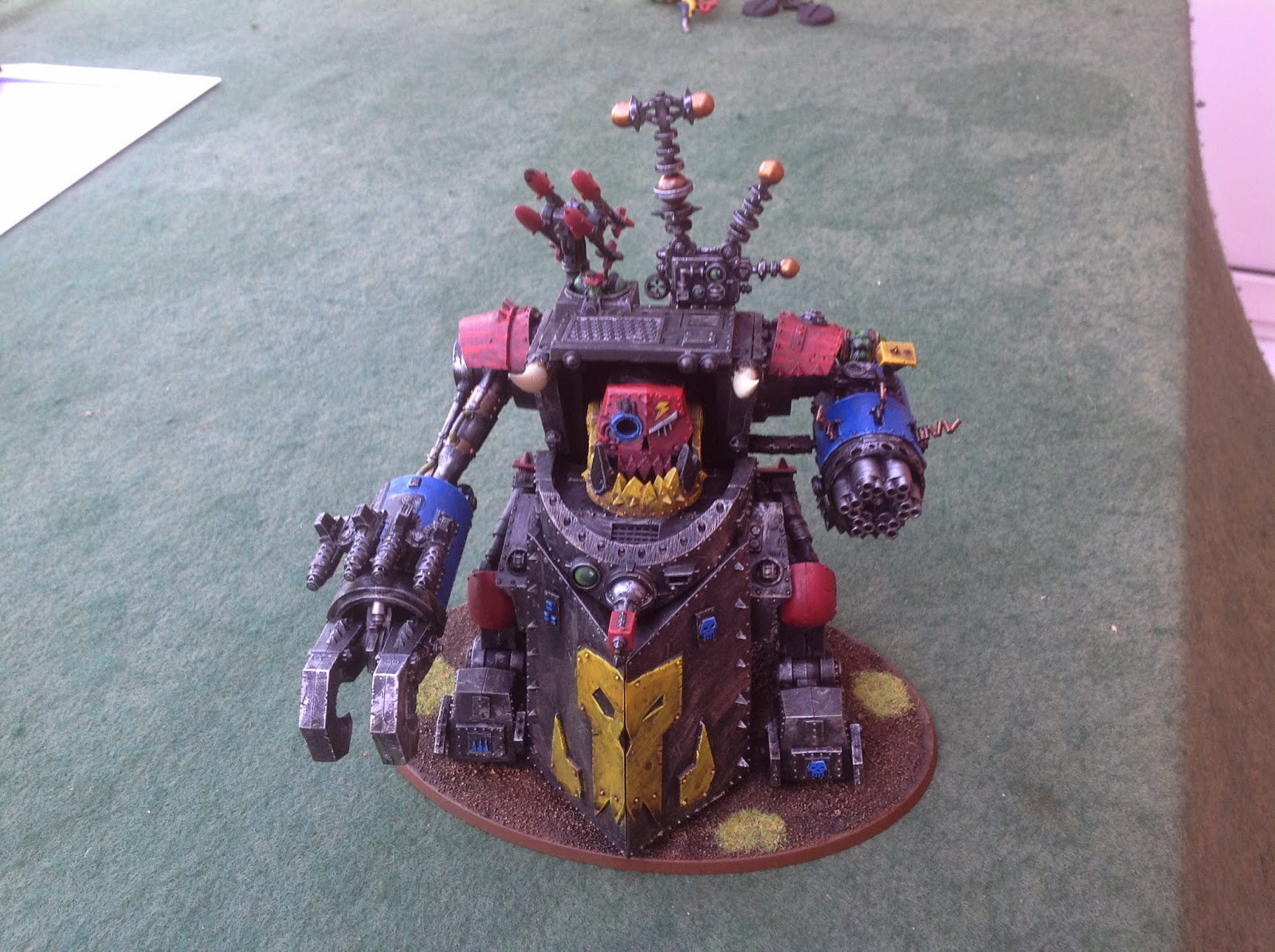 It does look imposing though. (Now that I have read the rules I note that its not allowed the KFF - I will have to see if I can carefully remove it) The Armour is decent FA13, SA13, RA12. It has four attacks and 5 Hull Points. So it should be survivable enough. It has no fire points! This means that whoever is inside can't shoot out. Not a huge deal but you have to wonder why? It can transport six models. Another very odd number. This limits those that can use it to Elites or HQ as all other mob sizes are 10 and above. Unit options include Burna Boyz, Tankbustas, Nobz and Mega Nobz. There is the option to keep the unit size to 5 and put a Mek Boy in there to repair HP's.

As a Walker it can move 6" and then there is a choice - shoot or run? If the choice is to shoot it will slow the Gorkanaut down making it less likely to be involved in the attack. It becomes a fire platform sitting at the back of the army. If the choice is to run then the focus must be on getting into hand to hand / delivering the contents of the beast. Lets look at these options.

1. Shooting - it is anti infantry. (I do like the Ork sitting at the back of the gun.) 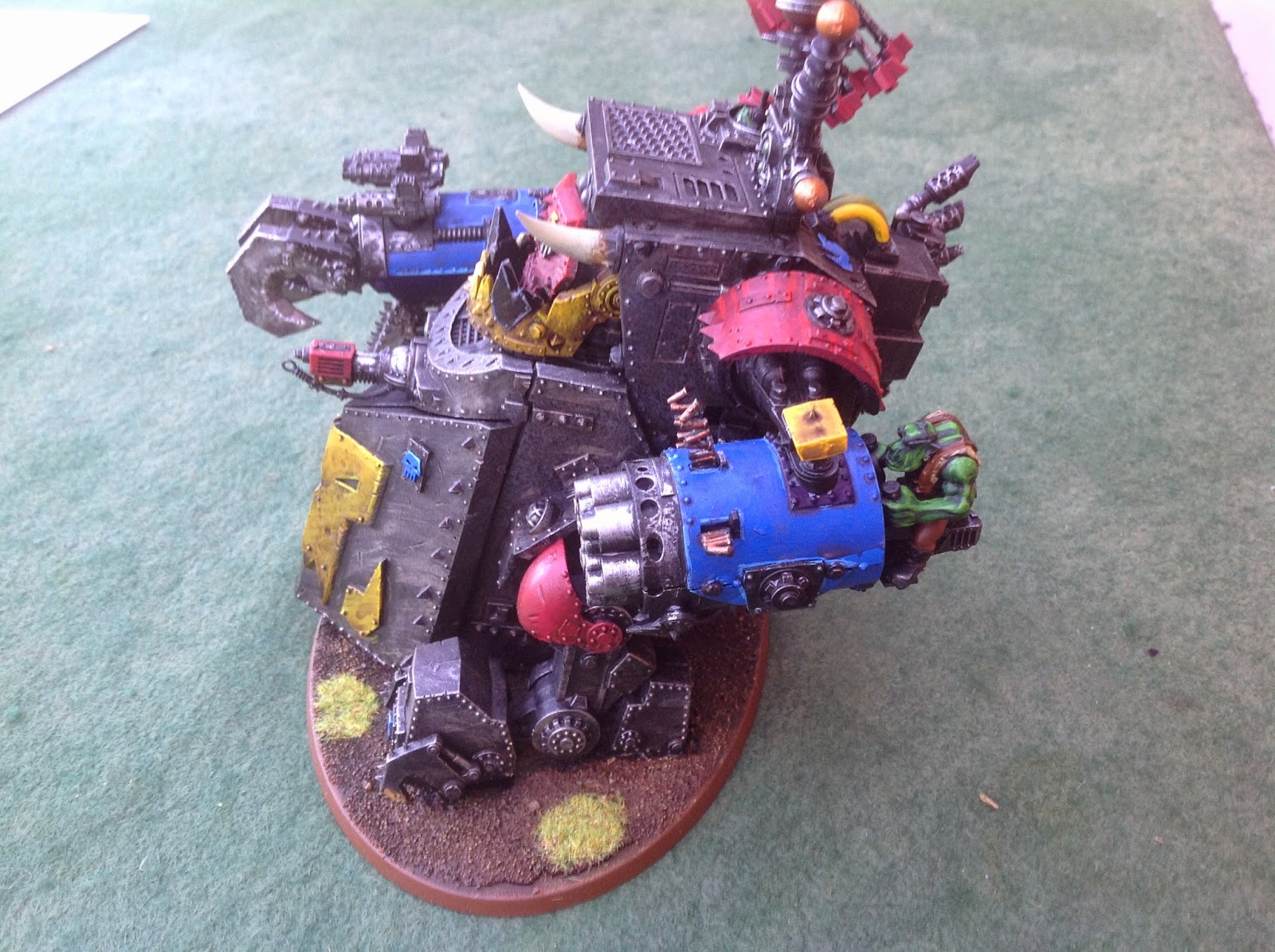 The big deal is the Deffstorm R36", S6, AP4, Heavy 3D6. The Ballistic Skill remains 2 so what does this mean? Average 9 shots with 3 Hits likely. S6 should result in 2 Wounds but then there are saving throws. Not exactly devastating.

The Big Shootas will pump out 3 shots each so that is 6 shots expecting 2 Hits. They are twin linked so that should give another Hit. Therefore potentially 3 Hits at Strength 5 so hopefully 2 Wounds and then there are the saves to consider.

The Rokkit Launchas will be pot luck really.

The Skorcha is a Template weapon so needs to be up close to be effective.

(The Morkanaut takes a Kustom mega blasta & Kustom mega-kannon instead of the Deffstorm & Skorcha. For this there is a 15 point cost reduction. Both weapons Get Hot (I hate that rule) but on the up side one is a Blast weapon. I do like a Skorcha though!)

First off the Rampage special rule is in play. This grants an extra D3 attacks to the Walker if the opponent has more models in the combat. This is highly likely to be in use.

Hammer of Wrath is also in play. This grants an extra attack that always Hits and is resolved at the models Strength, AP -. The Gorkanaut is S8. 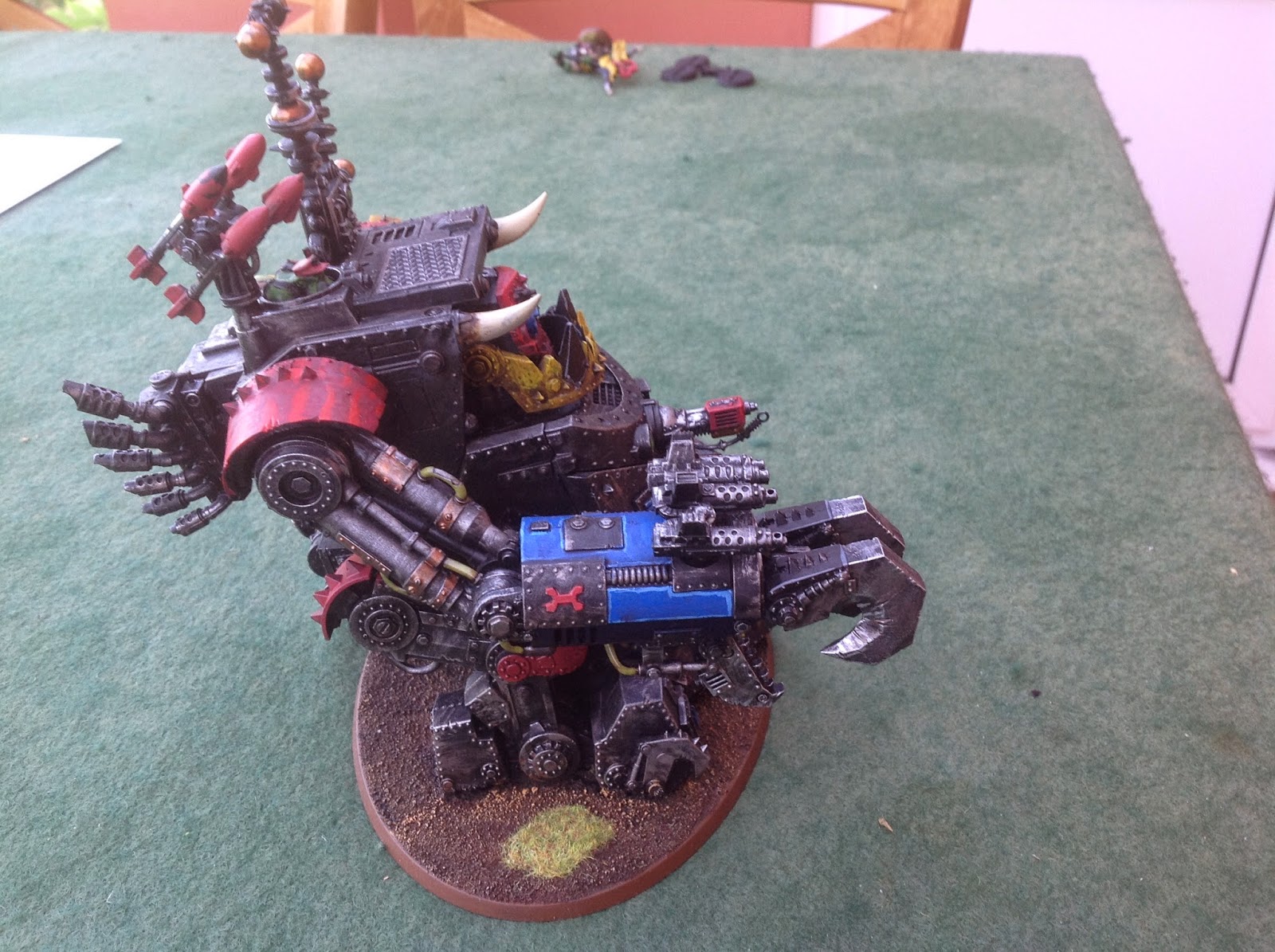 Other than that the Gorkanaut is armed with the Klaw of Gork and has 4 Attacks (5 on the charge). The Klaw is S10, AP1 Melee, Concussive and Fights with a WS of 4.

All this makes the Gorkanaut a bit of a beast in Close Combat. A large number of attacks is good against troops and the high Strength and AP1 makes it good against Vehicles.

Walkers can also fire in Overwatch which would be great if being charged.

The Gorkanaut is a Walker and as such quite slow. It is probably most effective in Close Combat and a lot of consideration needs to be given to the unit that will be transported so that it compliments the chosen tactical deployment.

It is a real threat and could be used defensively to shore up one side of the battle field. Any small unit inside could potentially emerge late in the battle to seize objectives.

Either way I still have my doubts - it is a lot of points and will need to pay for itself! It does look Orky though.
Posted by Bullcher Feb at 02:31