Unleash hell from the skies.

One of the great joys of 40k is its evolving nature. Since my last outing, some time ago, my Orks have developed a range of flyers to torment their enemies. Sunday will be my first opportunity to try them out so lets have a look at my options. 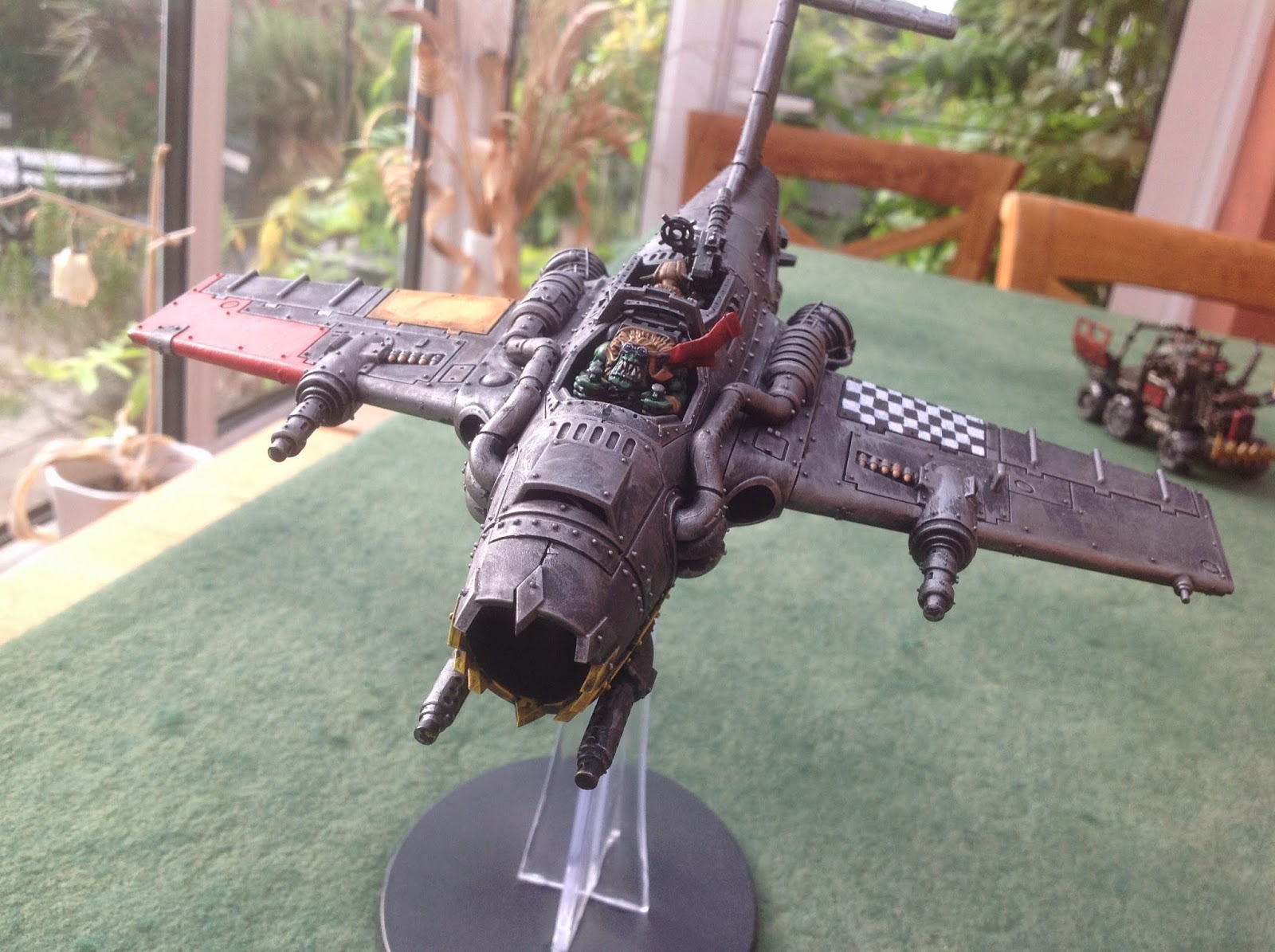 There are two basic flyers, the Dakkajet and the Burna-Bommer which cost 110 points and 115 point respectively and then there is the Blitza-Bommer which comes in at 135 points.

The Supa Shoota R36", S6, AP4, Assault 3 is the main shooting weapon. There is also a range of bombs and missiles. The Burna Bomb S5, AP4, large blast, Ignores cover and the Boom Bomb S7, AP2, Armourbane, Large Blast, Screamin Decent. The missile is the Skorcha Missile S5,AP4, Heavy1, Blast, Ignores Cover. All the flyers have rules that increase their BS to 3. Also bombs only scatter D6 so quite accurate.

The Dakkajet has 2 twinklinked sups shooters and may take a third for 20 points. So that is a total of 9 shots with a BS of 3. Expect 4-5 hits and then re-rolls for another 2-3 hits. An average of 7 hits a turn however with AP4 the space marines will get their armour save. This also has the option to be used against enemy light Flyers by giving it the Fly Boss upgrade.

The Burna-bommer has a twin linked Big Shoota and a twin linked sups shoota. Its plus side is that it can take unto 6 Skorcha Missiles and has 2 Burna Bombs. The AP4 will again allow armour saves. To use the bombs you have to fly over the enemy which in itself could be an issue. In range of Rapid Fire weapons etc.

Finally there is the Blitza-Bommer. It has a Big Shoota (not twin linked) and a Twinlinked Supa Shoota. The plus side here is that it has 2 Boom Bombs. Now with an AP2 these could cause some damage and they have Armourbane.

I think that the issue here is will they be worth their points?

I struggle to see how the Dakkajet and Burna-bommer could be effective. The high AP on the weaponry will leave the Space Marines making lots of 3+ saves. The Dakkajet could be an anti air option, so worth a thought. The Blitza-Bommer on the other hand has 2 Boom Bombs. That will be two opportunities to use the large blast template probably killing everything under it.

The other thing is that they have only got 10 Armour value and 3 Hull Points. Not exactly difficult to take out of the sky.

Overall I am fairly disappointed with the Flyers. For me, they could have been made a bit more quirky and been given a tad more firepower.
Posted by Bullcher Feb at 02:54