We visited Salute 2013 at the weekend and it was really great. So much variety and the really large crowd appeared to be spending lots of money. Great for the hobby.

As part of the handout pack we received a 28mm model with 2 possible assemblies. Earlier in the week I assembled mine (didn't look at the pictures or the instructions obviously) and this resulted. I think we can call it the third way. 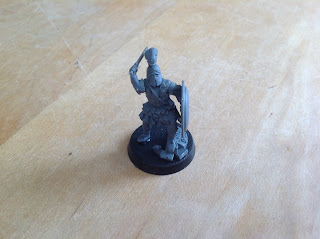 I really liked it, but I had lots of bits left over. Yesterday I went to the car and took out the magazine that came with the pack and a very different assembly emerged. 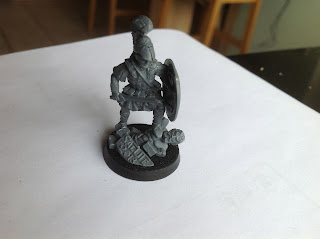 I had missed putting the head under the mask and didn't realise that the figure should be standing on statue.

Its funny what happens when you actually consult the instructions. My DIY has always had similar problems ;-)
Posted by Bullcher Feb at 02:19 3 comments:

So I have had a look around to get some inspiration for the painting. 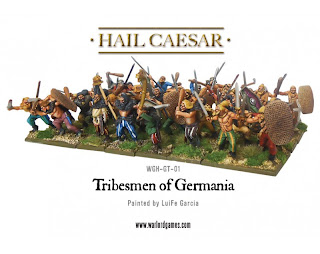 This seems to be the direction that should be taken. I think they look good. I like the bright colours and the use of stripes is cool. 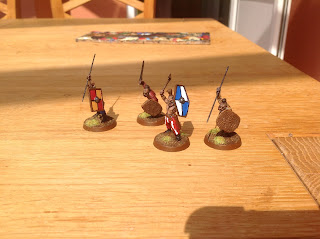 After a few hours this is how my guys are looking. Still plenty to do - but coming along nicely.
Posted by Bullcher Feb at 05:16 2 comments:

The Dark Templar is visiting this weekend and has a 'new and secret' project that he is working on.

In preparation I was required to delve into the world of 28mm models and so I have made my purchase and they arrived yesterday afternoon. Germanic Tribesmen. 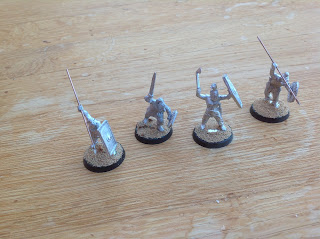 OMG - have my fingers suddenly grown or could it be that they are soooo small!! How does anyone work at this scale. Just assembling them was scary.

I purchased 8 metal figures from Warlord Games. I am short 4 shields so I will work on the 4 that are complete with a view to having them to a playing standard for tomorrow. I have just assembled and based them. Waiting on the glue to dry and then I can base coat. I have a few hours of painting ahead of me and then I will be ready.

I am excited to learn of the 'new and secret' project - what can the Dark Templar be up to? Check out his recent activity for more clues the-dark-templar