The Tankbustas were always a favourite with me. I love the idea of mad Orks armed to the teeth with every conceivable anti-tank weapon just rushing headlong into the fray to destroy as much armour as they possibly can. Now in the old rules this was in fact a bit of a problem as they were forced to attack all the time and sometimes, when they got excited, even their own vehicles. No don't get me wrong, I like a laugh as much as the next person, but they weren't exactly competitive. It was almost as though your opponent controlled where they ended up.

Well thats all changed now and the new 7th edition Tankbustas are now a proper force to be reckoned with. They come with improved shooting opportunities as well as Tankbusta bombs for all and we still have the very zany Bomb Squigs! I think every Ork army will have a squad!

Lets have a proper examination of these bad boyz! (I needed to reach back in time to get sufficient Rokkit models and I am still 2 short for a full unit). 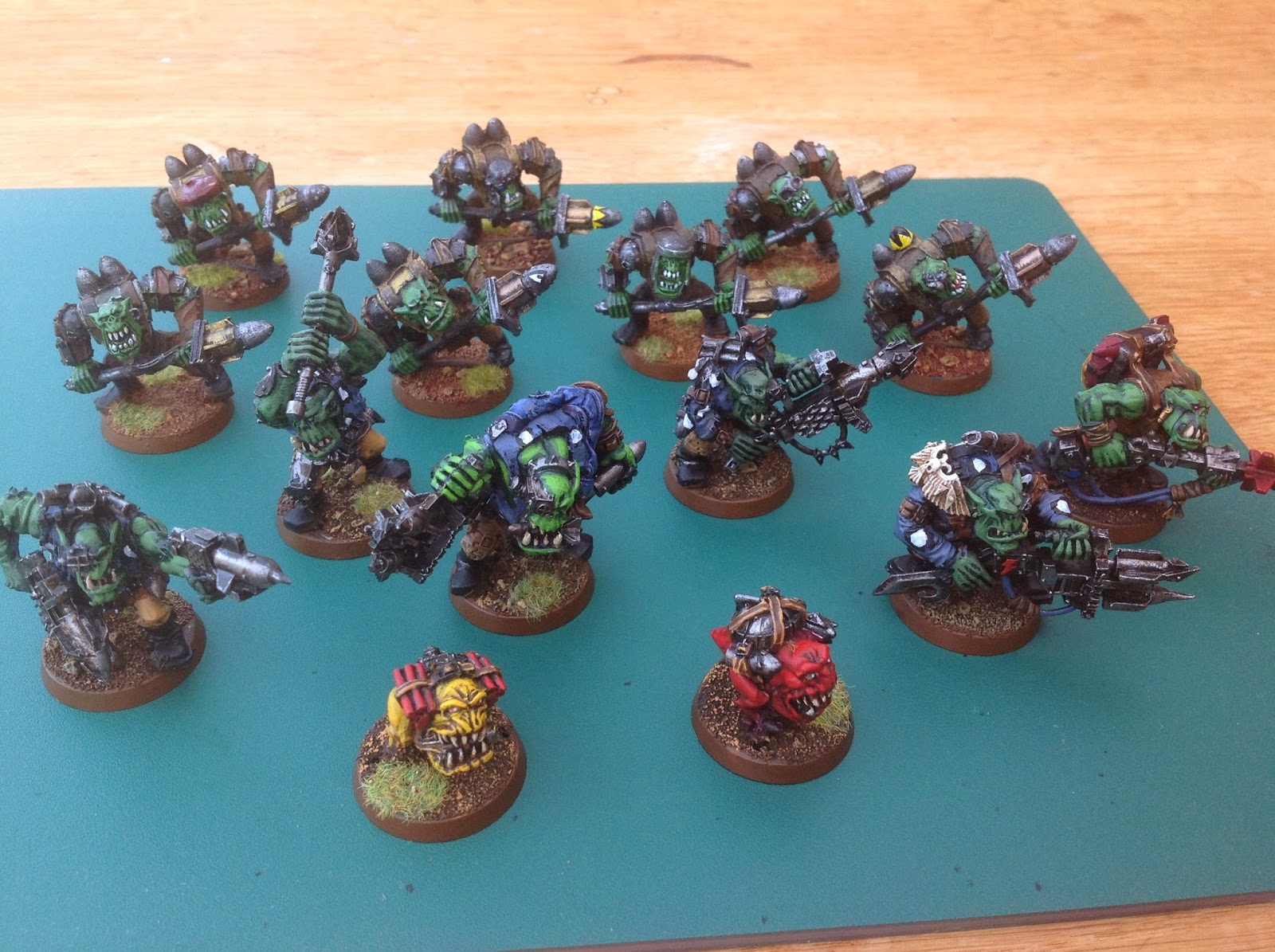 A unit of 5 Tankbustas costs 65 points and each of them is armed with Rokkit Launchas R24", S8, AP3, Assault 1. Everybody in the unit has one of these! They also come with Tankbusta Bombs (melta bombs) S8, AP1, Armourbane (rolls an extra D6 for Armour Pen and choose the 2 highest), Unweildy (Fights with an I of 1 in hand to hand). The entire unit also has the Tank Hunters rule and therefore re-rolls for armour penetration and can re-roll Glancing Hits.  They can all be put in a Trukk (capacity of 12)

Two models can swap their Rokkit launches for Tankhammers S8, AP3, Melee, Two handed, unwieldy. Costs 15 points each. I don't really see the point in them at all! Use the Tankbusta Bombz against vehicles and if the Tankbustas are in melee - then they are toast anyway! You have to give up 2 Rokkit Launchas as well - and with a BS of 2, I think the squad will want as many shots as possible.

In other words they are full on anti armour!!

To really put salt in the wound they are also 'Glory Hogs' which grants double Victory Points if the first model to leave the board in an enemy Tank! Potentially game winning and very much in the Ork character. I like it.

In terms of unit size - you can have an additional 10 models at 13 points each - that is 15 in total. One may be ungraded to Boss Nob. The big call is going to be - How many do you include? They are going to attract attention. I think the Trukk is necessary which puts a limit of 12 on the unit size - but in smaller games I think less will be needed.

You can also add up to three Bomb Squigs for 5 points each. This is a one off ranged attack i.e. the squig runs forward and explodes! R18", S8, AP4, Assault 1, Scuttle Scuttle Blam! (always hits on a 2+) 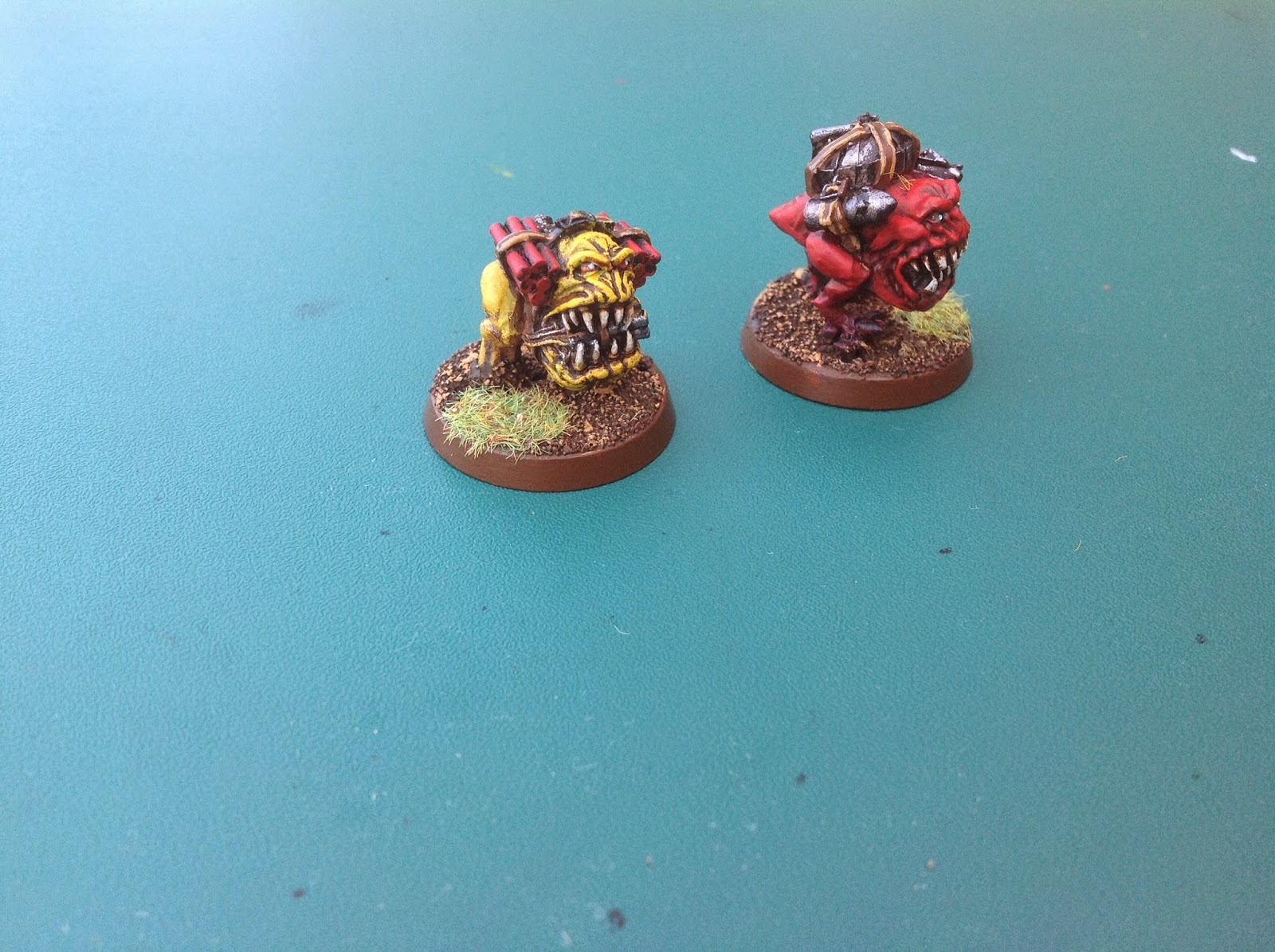 I think that this is great value for the 5 points spent. It gives a S8 ranged attack, hitting on a 2+. Orks just don't have that capability anywhere else. Got to have all 3 in any army.

Tankbustas will be great fun to play and it will be worth my while investing a little more time in upgrading their paint job!