Building my Warband for Frostgrave

Yes folks,  Frostgrave is giving me lots to think about. 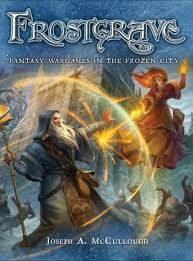 Spells
Spells are a big part of the game. Each Warband has 2 casters and they cast the same spells. The Apprentice is less good than the main wizard and suffers a +2 to the dice roll. I figure that it is important to choose low value spells in the beginning to increase the chances of being successful when casting.

I have decided to take an Elementalist as my Wizard. In my mind this is a proper wizard. He has lots of damage related spells which should be fun and a couple that provide cover in the form of a shield or wall. The down side is that all spells are starting level 10 / 12 to cast (on a D20). There are no level 8 spells.

I just like the idea of Elemental Bolt. You shoot a bolt of lightening at anybody in line of sight. No distance restriction. You get a +8 benefit to your dice roll. So it is my Shoot against the target Fight. We both roll a D20 and add the modifier. Most characters have a Fight of around +2 so my +8 is a major advantage. It is a level 12 starting spell so not great in the beginning but later in the campaign could be dominant.

Elemental Shield might be handy and is starting level 10. It absorbs 3 damage.

Wall is another level 10 spell and allows a 6" section of wall to appear on the board near the caster. Could be great for breaking LOS.

He is allied with Chronomancer where the spells are mainly to do with movement and the environment, Summoner who summons a lot and Enchanter who does what it says on the tin. In order to use spells from these disciplines you suffer a +2 to your dice roll. I thought I would go for level 8 spells to start with.

I like Leap from Summoner - you can move the target 10". If carrying treasure your move, typically 6" / 7", is halved, so a 10" move could be very handy indeed.

Enchant Weapon from Enchanter is also level 8 and bestows a benefit to a weapon that lasts for the entire game. Cool. Might be good on a bow.

Telekinesis from Enchanter is also a level 8 spell. Move any treasure within 24" unto 6".

I can start with two more spells but from the Neutral schools of magic. To cast these I have to add 4 to the dice so they will be pretty useless in the beginning.

I am thinking that I will only look to these spells in an emergency so I had better go for something dramatic.

Steal Health looks interesting. You gain 3 health and the opposing character loses 3 health. When its down to the wire and it is do or die I might just opt for using this level 10 spell.

Blinding Light also looks good in that you dazzle the opposing character and they can't use their Line of Sight abilities. Again this could be a last ditch action so I think I will go for it. Another level 10 spell though.

So there we have it. After much reading I am going for Baldric the Elementalist and his apprentice Ming. They will be using Leap and Telekinesis to enhance team movement, dropping walls and shields to protect the war band and ultimately they are a massive threat because of the ability to hurl bolts of lightening across the table. I am getting into character already! Kaboom!

I have decided to go with the following: -

My Warband is 7 members strong and looking forward to its first outing.