2016 and the start of some regular gaming. Hurray. Today it was Guild Ball. My Masons taking on the Dark Templars Butchers. Our first proper game with six a side teams, needing 12 victory points to claim the win.

Now I had given the game some thought. We had played a couple games with the Starter Box sets and learned a fair bit from that. We both agreed that this is a really good game to play and that each of the teams has its own distinct character. The players combinations and styles are also unique and the game dynamics are very well thought out. 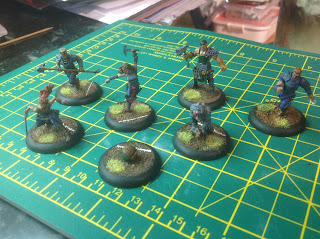 My captain Honour is in, as the whole team revolves around her.
Next is Harmony. She is linked with Honour and can even use Honours stats in certain situations.
Marbles is in the line up. He is a cool mascot and can be great for the team.
Flint is my ball carrier and main Kicker so he is a must. Long distance kicking if Influence is used well.
Mallet is a solid player if a bit slow. He will be shoring up the middle of the park.
My final choice was the inclusion of Tower. I liked the way he could dish damage against Knocked Down players.

I had a basic plan. I knew that the Butchers would want to take hold of the middle of the field and then lock the Masons into battle and beat them senseless. To counter this I planned to kick the ball wide to create space and then pass it a fair bit to generate Momentum and use the Give'n'Go and Pass'n'Move rules to allow characters an extra 4" Dodge. This had worked well in our starter games and with Flint on the board I should be able to really take advantage of this.

I planned to use Marbles to tie up  the Butchers ball carrier Brisket. Marbles has the Goad ability. This forces the named model to move towards Marbles all the time he is on the board. Also because Marbles has Loved Creature the Butchers will not want to kill him early. This gives the team big bonuses in the turn he dies. So move Marbles away from the play and lock Brisket out of the action.

Tower and Mallet will engage the Butchers in the middle of the park.

Honour, Harmony and Flint will form a flying squad and operate on the sidelines with a view to scoring 3 goals. Each worth 4 victory points.

The plan is to score early and then use Flint, Marbles, Honour and Harmony to Tackle. They have Tackle in their first damage slot and this will be important.

The main thing is to move and pass. Score early and try to get the ball back. Take advantage of the early rounds when I have all my guys on the board.

The Masons started the game by kicking off. 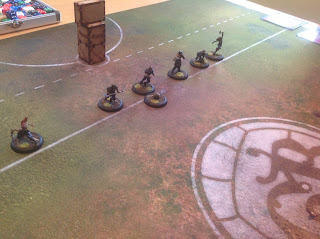 I lined up with my Kicker in the middle and then split Harmony and Honour. This gave me options to move the ball away from Brisket. I kicked diagonally and placed the ball just over the half way line. 4 dice needing a single 4+ roll. Fail! The ball scatters and ends up almost off the board.

The Dark Templar had included Shank in his line-up and I think the model is just spectacular. I love those flowing chains. 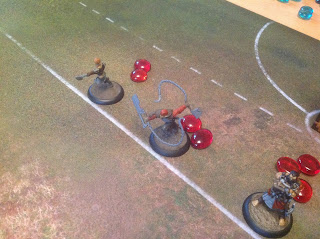 Brisket was lined up on the Butchers right, so would be the target for Marbles. Ox and Boar lined up in the middle with Boiler on the left. 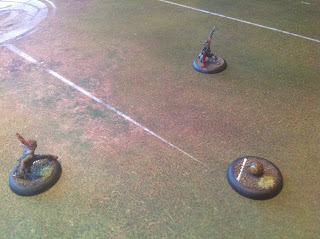 The chase was on to pick up the ball. I actually managed to get Flint to the ball. He ran down the line with it and then kicked back to Harmony. 4 dice needing a single 4+, Fail! OMG! The plan had been to make two or three passes to give extra movement to Harmony and Honour but No.

The ball scatters and both teams decend on it. Ox comes through and finally gets hold of it. Love that model too and the DT has done a cool painting job on him. 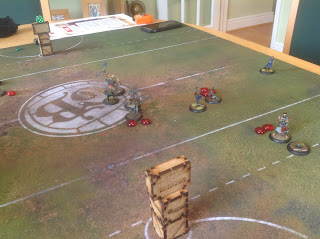 Marbles had done his job and was locking down Brisket and Princess on the left and Tower and Mallet were standing up to Boar in the middle. 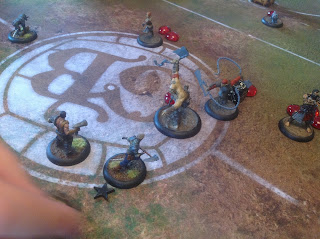 I realised that I could hit Boar on a 2+ and planned to try and take him out. Mallet hit him with Knock Down. I had given Tower loads of Influence and he then got stuck into the prone Boar. I got close but couldn't quite kill him. I needed to have a third person there to guarantee success. I got soon close though.

I sent Honour after Ox to Tackle for the ball. 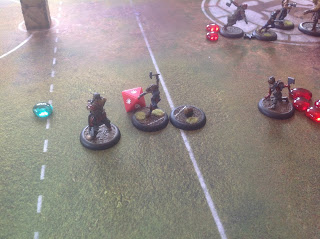 He countered a couple of times and so the ball exchanged hands. It was very dramatic and thankfully I had given her enough Influence to do the job. Finally she got the ball and passed it down the field to Flint who used Pass'n'Move to advance towards the goal. 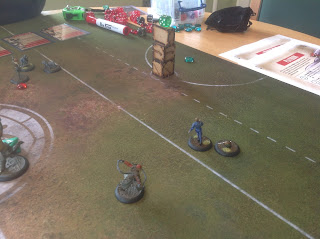 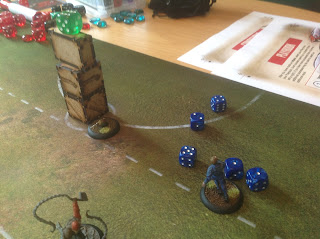 Success!! The Masons score. It's our first ever and quite dramatic! Yippee!

Now in reality I was being beaten to a pulp elsewhere on the board. All that messing at the beginning was costing me. I had been 6-0 down but this score got me back to 6-4.

In Guild Ball the ball bounces straight back into play. It bounced out to the far wing so I used Run the Length to advance Flint in its direction.

The problem for the Masons was that we were losing players. This then gave numerical advantage to the Butchers and additional dice rolling advantages. We needed to retrieve the ball quickly and score again to have any hope of victory.

Both Marbles and Flint have Tackle in the first damage columns. I needed to use this. Marbles continued to Goad Brisket so she couldn't escape with the ball and this gave Flint the chance to get close and Tackle the ball back. 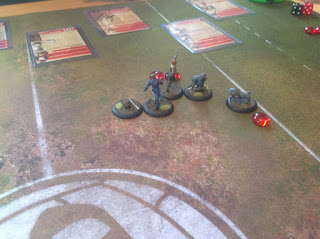 Shank was close and he stole in back for the Butchers. He hit Flint hard and did a lot of Damage allowing him to Wrap. He Tackled on the first damage and Flint used Close Control to hold on to the ball but Shank Tackled again on the Wrap and then stole away. 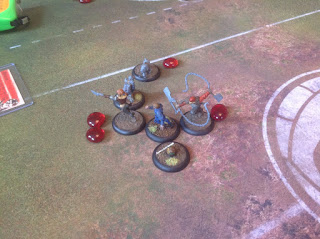 We love the game. This one was good fun. It was unfortunate that I fumbled the ball so much in the beginning but once I finally got hold of it and generated Momentum I started to shine.

It is clear that each character has its own role and getting them doing the things that they are good at is vital to having success. We learned a lot in this our first proper game and it was great to see some of the new characters in action.

We still have a lot to learn and I know I will enjoy the journey.
Posted by Bullcher Feb at 03:02