Hello all and welcome to 2016. May it prove to be a great one for the hobby. Lets get paint on models and play for fun.

We started the new year year with a new game - Guildball. The Dark Templar came back from his trip up north and we were ready to go. I was playing the Masons boxed starter set which I had painted earlier in the year. DT was playing the Butchers and he had done a splendid job on painting his captain Ox.

We laid out the board and were ready for whatever the day would throw at us. 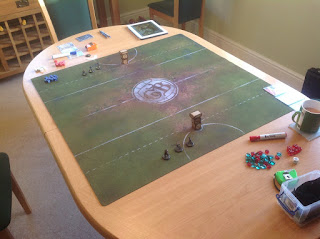 The excitement was palpable. We were using the the full 3x3 and did not place and debris. We set  the target Victory Points at 6. There are 4 for scoring a goal and 2 for taking out an opposition player. They recommend playing 2x2 and I think this would have been better in terms of play, but we had the  mat so .....

There are some excellent utube videos out there to give guidance to any new players and it is advised to take advantage of this resource. I found it really helpful. The rulebook itself is not easy reading although the starter rules are excellent!

The Masons team was made up of my Captain Honour, my ball carrier Harmony and Mallet for some power.

We faced the Butchers who fielded the captain Ox, ball carrier Brisket and Boiler.

We kicked off and were both trembling with excitement. 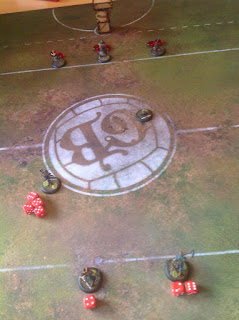 First thing to say is that this game has real personality. We really got into it very quickly. There is a lot to take on board and the first game was all about getting a feel for the characters and learning a few tactics.

The Brewers are an extreme team. There way of winning is to stick the ball 'up their jumper' and wail on the opposition. The Masons need to play and score. It was great fun.

The first game was a static affair and Ox set the tone. By laying into Mallet. 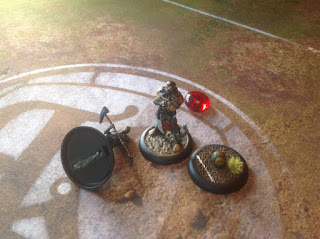 This was followed by a proper 'dust up' in the middle of the park. 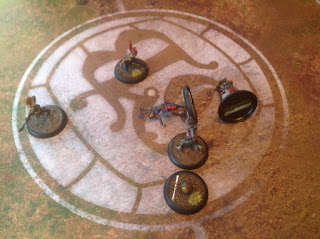 Before finally the Brewers got the first Touchdown. Mallet had already been 'laid out', so 6-0 to the Brewers to conclude game one.

So I had learned that I could not 'mix it' with the Brewers!

Game two was a much more fluid affair. I started with the ball. I passed a few times and each time used Pass'n'Move with the Momentum gained to Dodge forward an extra 4". This proved to be a really cool tactic and got me moving well up the board. We also spotted that Honour has a Momentous 1 Damage, 2" Dodge in the second column of her damage table. So if she Attacks and does 2 damage she can trigger this outcome. I used this to revolve around the group of Brewers. I had success after success. It was amazing and exciting. Really cool game mechanics. I loved it!!

Finally I got myself in shooting distance. I had 4 Kick dice and just needed to roll a 4+ on any of them for the fist Masons Touchdown! I picked up my blue dice and confidently rolled ..... 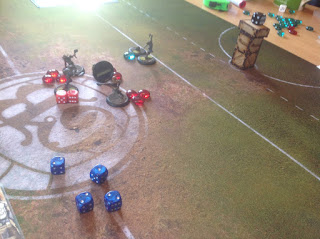 No matter the game - you still need the luck of the gods. The Brewers pounced on my miss and proceeded to pummel my guys into submission. 6-0 to the Brewers. A trend developing. On the up side I had learned how to move the ball quickly and effectively. I had learned about Momentum and how it could be used to great advantage.

I started with the ball and this time I teamed up Mallet and Honour, using Quick Time to drag the slow moving Mallet up the field. I did't use Topping Out except once and this was a mistake as the extra Armour or Influence would have been important.  Responsive Play is a great advantage when linked with the Momentous 1 Damage, 2" Dodge. It takes Honour out of harms way. I slid Harmony up the field while tying dow the Brewers in the middle of the park.

This time Harmony got close. 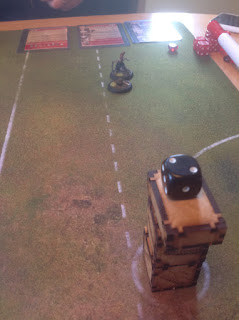 And closer still, however Brisket got in a vital Tackle to retrieve the ball. 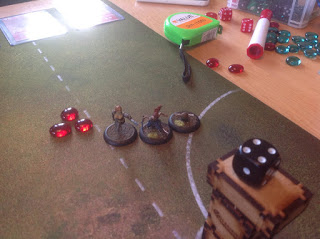 The Brewers had the ball back and were able to march down the field before Ox stepped up to do the honours and score the final Touchdown. 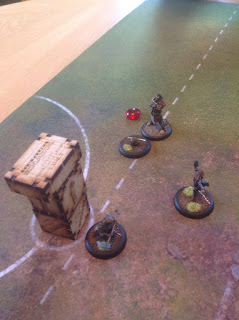 A familiar out come 6-0 to the Brewers.

This is a great game. There is a lot to learn and it is very chacterful. It feels like a cross between Bloodbowl and Malifaux. The game needs to be 6v6 on a playing field of this size. This will increase the options for each side and tigger more of the interesting plays.

The game is great fun and there is lots happening. There are plenty of dice to roll and there is a need for a multitude of markers. I'm not sure how this will feel when there are more characters in play but it manageable at 3v3.

We need to get dates in diaries and get a few more games under our belt.