So today is the big day. Its 9am and I have already set up the board outside. Weather forecast is for a nice warm day with low wind. Perfect. Just had a text from the opposition to say that he is on the way so I need to get the kettle on. The Dark Templar is planning to Tweet key events during the day, (details on his blog). That will be a first for us and should be interesting.

So what army did I pull together? Your going to like this....

I have taken on board the Ork Walker discussions that have been going on and pulled a list together that I really love the feel of. It should really wipe the floor with anything being faced, he said confidently. It contains the Stompa, Gorkanaut, Deffdredd and 6 x Killa Kans. This is supported by a Battlewagon and Dakkajet. There is a unit of gretchin to make up the Troops numbers so that it is an Ork Horde Detachment granting Boss of Da Waaagh and The Greenskin Hordes special rules.

The plan remains - 'shoot the choppy and chop the shooty' 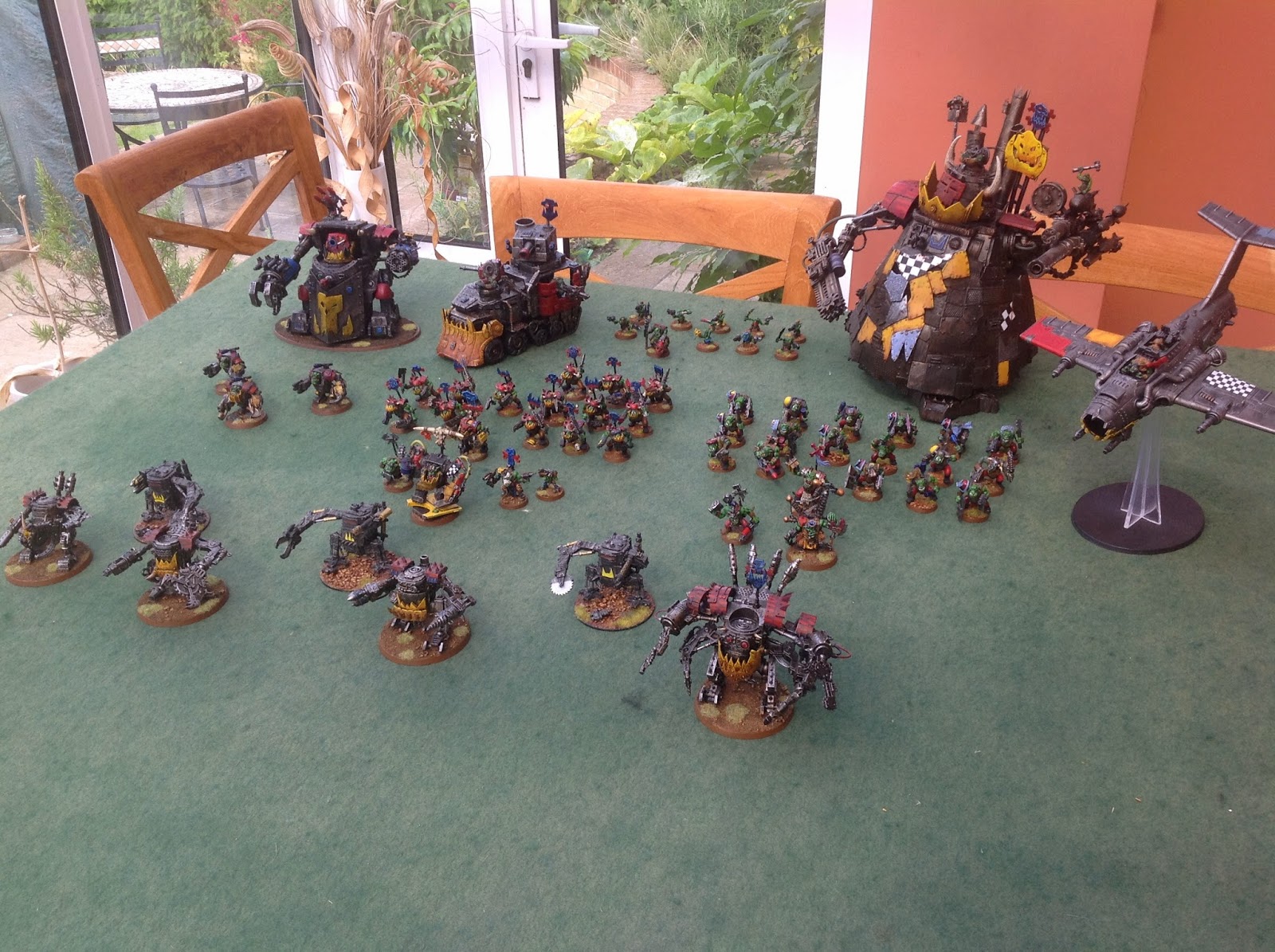 Note - the Battlewagon could easily be downgraded to a Trukk. Stick the Warboss in the Stompa and spend the additional points to get another Trukk load of Boyz at which point the Gretchin are not needed. No-one should be shooting at the Trukks anyway as there is too much other stuff that has amazing killing ability and they are Assault vehicles with could be advantageous.

So in theory, the Stompa goes straight up the middle moving and shooting anything that can shoot back. 'Shoot the Shooty'. Move him towards the most dangerous shooting attack so that he can 'Chop the Shooty' as soon as possible. The Boyz rokkits also shoot out of the Stompa. The Kans and the Dread follow behind moving and running to keep up. Move them towards shooty stuff. Again 'chop the shooty' as soon as possible. The Gorkanaut takes one side and again moves and runs. The battlewagon takes the other side and moves as far as possible. The Dakkajet is there to provide some arial support, if needed, and if not to just shoot from distance. The Gretchin can hang back and grab any objective at the back as the rest of the army surges forward.

The Kustom Force Field makes sure that any incoming shots bounce off the Stompa.

After the first turn everything in the Ork army is ready to descend on the enemy with awesome close combat abilities. Declare the Waaagh and give no mercy. The Boyz in the Stompa can hang on for a bit and get out later to mop up the remaining carnage, as can the meganobz.

Now all you Ork players just know that you want to give this a go. Waaagh!!!!!

The question is - what will happen when we start rolling dice? Will the plan survive or need to be altered? And so the fun begins.