Da Boyz are ruling the roost

Another fantastic day of Blood Bowl. Today I travelled to the home of the Daggeroth Darkblades. A totally different experience. We are starting to get a real grip on the game and today was much more tactical. The Dark Templar had done his homework and came to the game with a plan. Instead of standing up to the orcs he would fade away, dodge, pass and look for opportunities to open up. The heavy scale Blocking was a thing of the past. Today was for tactics.

The pity was that The Orcs had had a couple of victories with some SPP's and picked up some extra's. They were powerful. The Darkblades were virgin and as such they were up against it. However the plan was in place and the game began.

The difference between the undead and the dark elves is that you need to commit to the Dodge. Mentally this proved a challenge at the start of the game but over time the Dark Templar began to 'feel' his way to confidence.

The start was brutal! And the Dark Elves started positively. 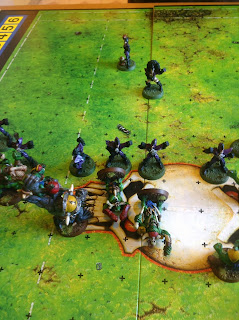 Both of my newly skilled orcs were on their ass on turn one. Could the fortunes be changing?

Not only this but the Darkelves had actually picked up the ball. This was different all right. Much more control.

However my Blitzer 'Valtrog' had acquired Mighty Blow and was rampaging around the field. He was applying pressure and beginning to be a real thorn in the Darkblades side. 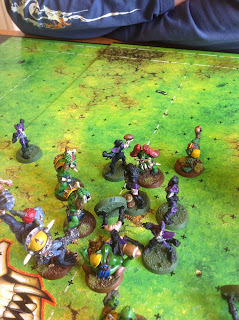 Block and Mighty blow really gave me confidence. The double handed blows of the Blitzer 'Karfu' were becoming an intimidating presence. Here he has worked his way around the back and is applying pressure on the ball carrier.

However the Darkblades were up to the task. The ball carrier squirmed free and was ready to pass the ball to a free Blitzer. Nooooo....... I had been sucked in. I was in trouble. The Pass went over the head of my upgraded Black Orc 'Valtrog Flame Basher'. He reached into the sky and attempted an interception. He needed a six and the big hand was raised into the sky. I rolled the dice and Nuffle was in my corner. Six!!! I had the ball. The laughing was loud!

And with that ...... I headed to the touchline. A hand-off to Blitzer number 11 and we are in. Can you believe it? We are ahead.

Karfu, my upgraded Blitzer, was doing some damage began to knock people over and cause some casualties - 4 on the day. Big SPP's for him. This was predicted on the blog comments. Well done guys. He was a maniac!!

Interesting Bolgrot was proving to be difficult. The troll must have had at least three turns of being Stupid. I can see why people don't like him in the Orc lineup.

There was some 'to and fro' in the following moves. The Darkblades were down 3 players by the half so gaps opened up and I scored a quick touchdown early in the second half.

But then the Darkblades returned to full strength and it was very different. The Darktemplar had begun to get some confidence about the strengths of his new team and it showed. They reacted well to receiving the ball and opened up a door in the middle of the field. 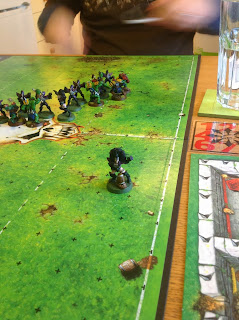 Their running Blitzer was away and  Going For It. I took some big risks and knocked the Blitzer down. My goblin picked the ball up but was knocked down himself. The Darkblades took control and walked in for their first touchdown!!! Gratz gratz.

A great game with lots of twists and turns. I think the Dark Elves suit the Dark Templar so will this team grow?? Lets see.

Thanks to the Dark Templar for hosting today. Great fun and a big step forward.

Will the 28mm Victorian step forward? So many questions.