And so it came to pass that the Boomtown Rats commenced their Blood Bowl season. A hugely eventful match that finished with a 2-2 draw and a very unhappy Dark Elf coach. For myself, well I laughed and cried in equal measure and in the end was delighted to get away with draw.

The new ref had a quiet word with the captains and we were ready to go. 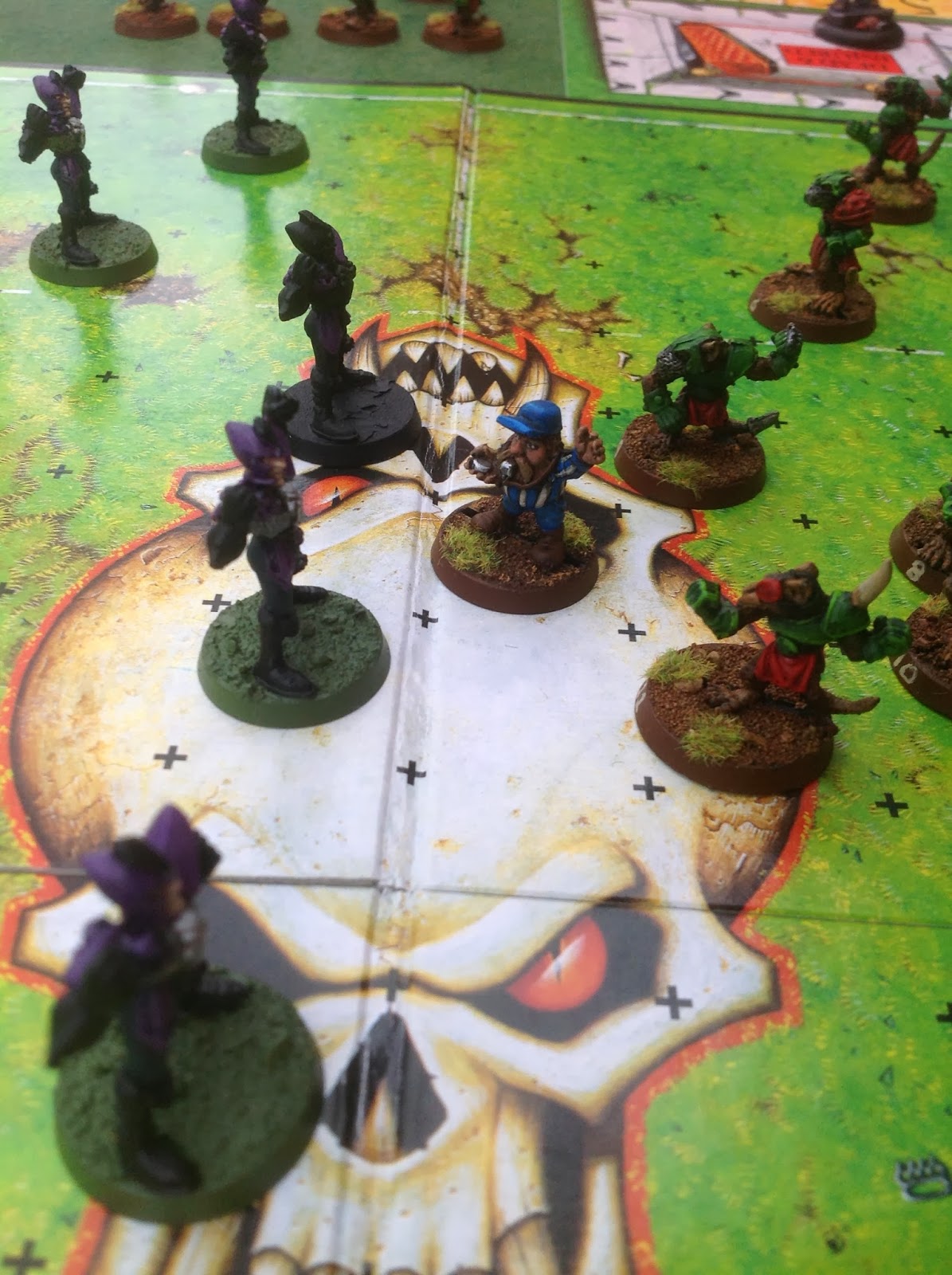 The skaven started by receiving the ball. We rolled a 'Quick Snap' on the kick off table and I was instantly on the front foot. I could move my guys one square before the start of the game. I advanced over the 'line of scrimmage' to make the most of the pressure. 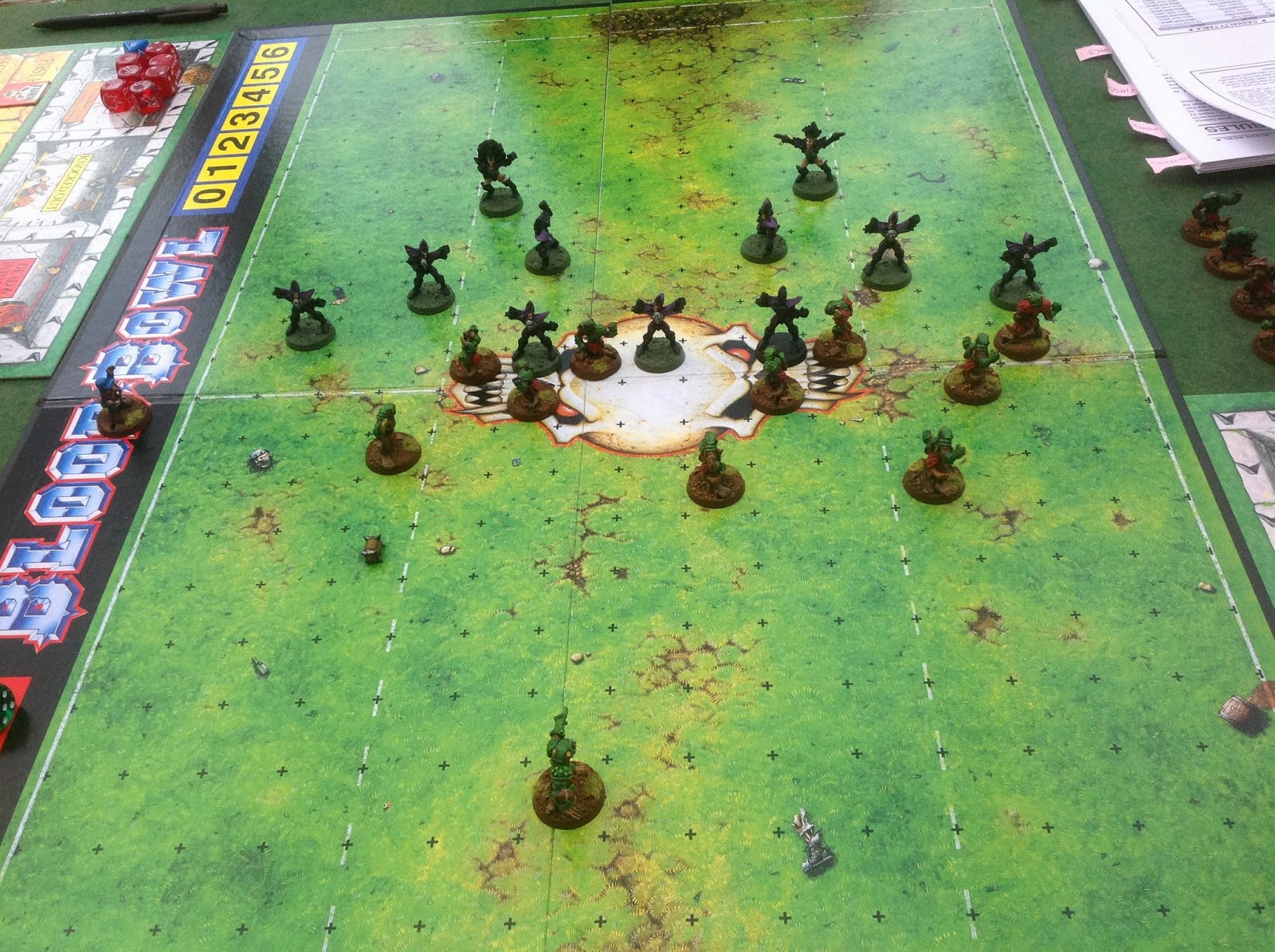 I picked up the ball with my Thrower. Opened up some gaps in the defensive line and moved a Gutter Runner and Blitzer into a good position down the right flank. 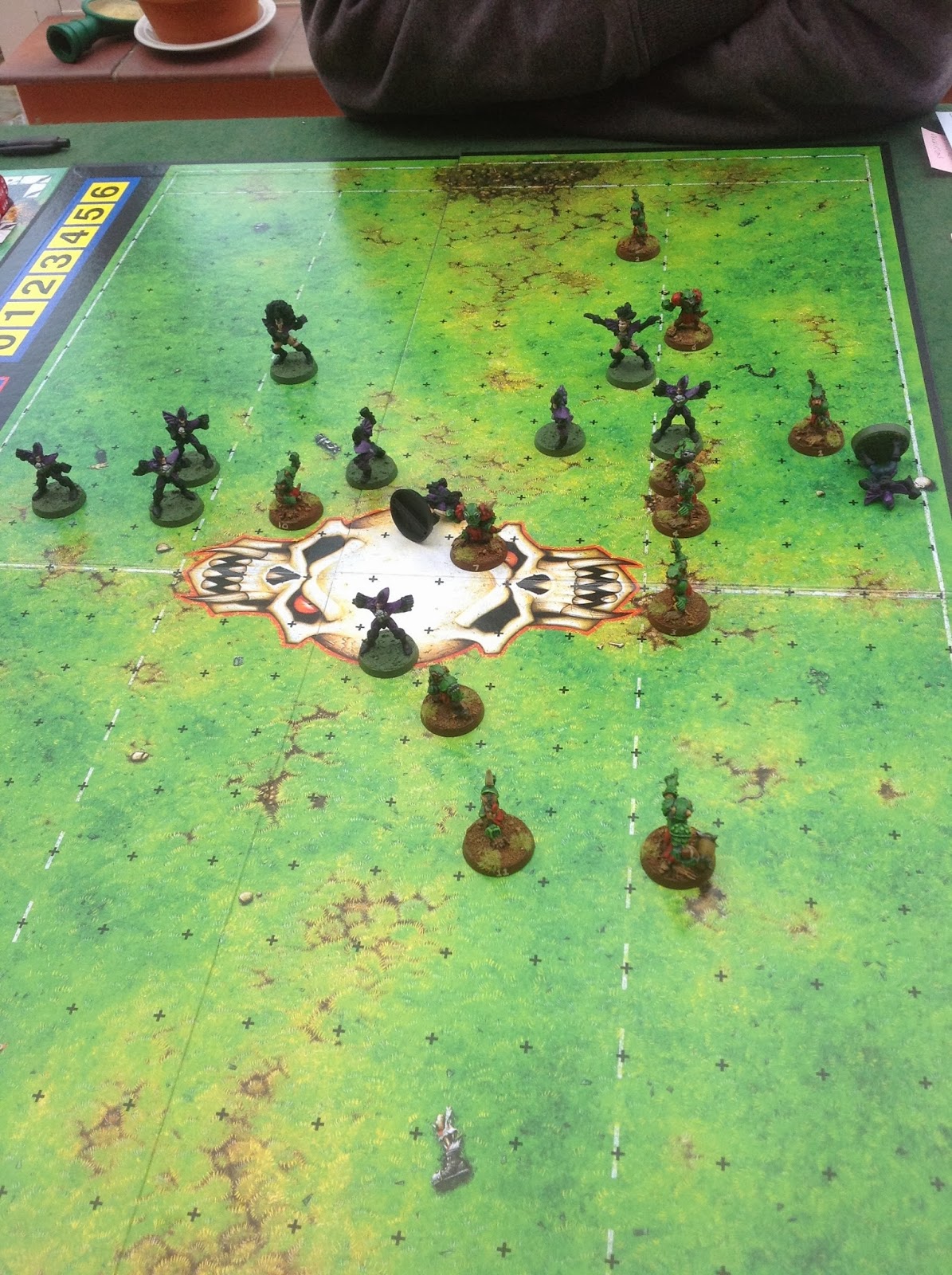 I was ready to score the first touchdown of the game but ........ I just couldn't resist the opportunity to foul before letting fly.

2D6 and I roll 5-5, a double. Oh My God! The referee had spotted the foul and sent my Lineman off. The ref, my new ref...... how could he. It was only Turn 3 and already I was down a man. It was also a turnover so no opportunity to Throw. I had really messed up.

The Dark Elves came pouring through and compounded my problems by inflicting the first 'casualty' of the game. Those new coloured Block dice were working fine and McMourning got to play with my number 10. 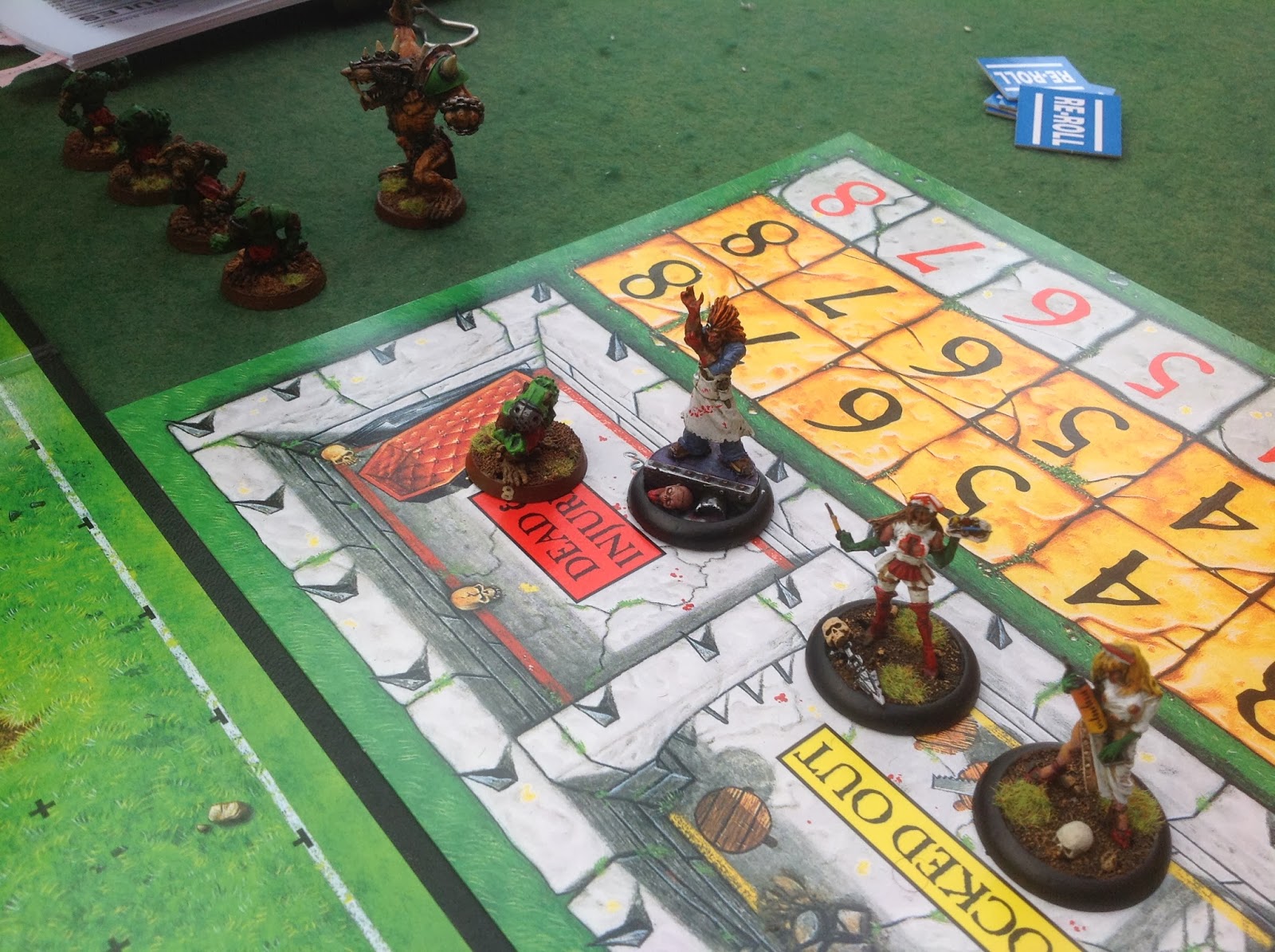 I was in big trouble now. Two men down and feeling the pressure.

Up stepped the Dark Elf, Adin Heartrender with the AG of 5 to dance his way through the Skaven tackle zones causing chaos, the ball dropped, he picks it up - this just can't be happening 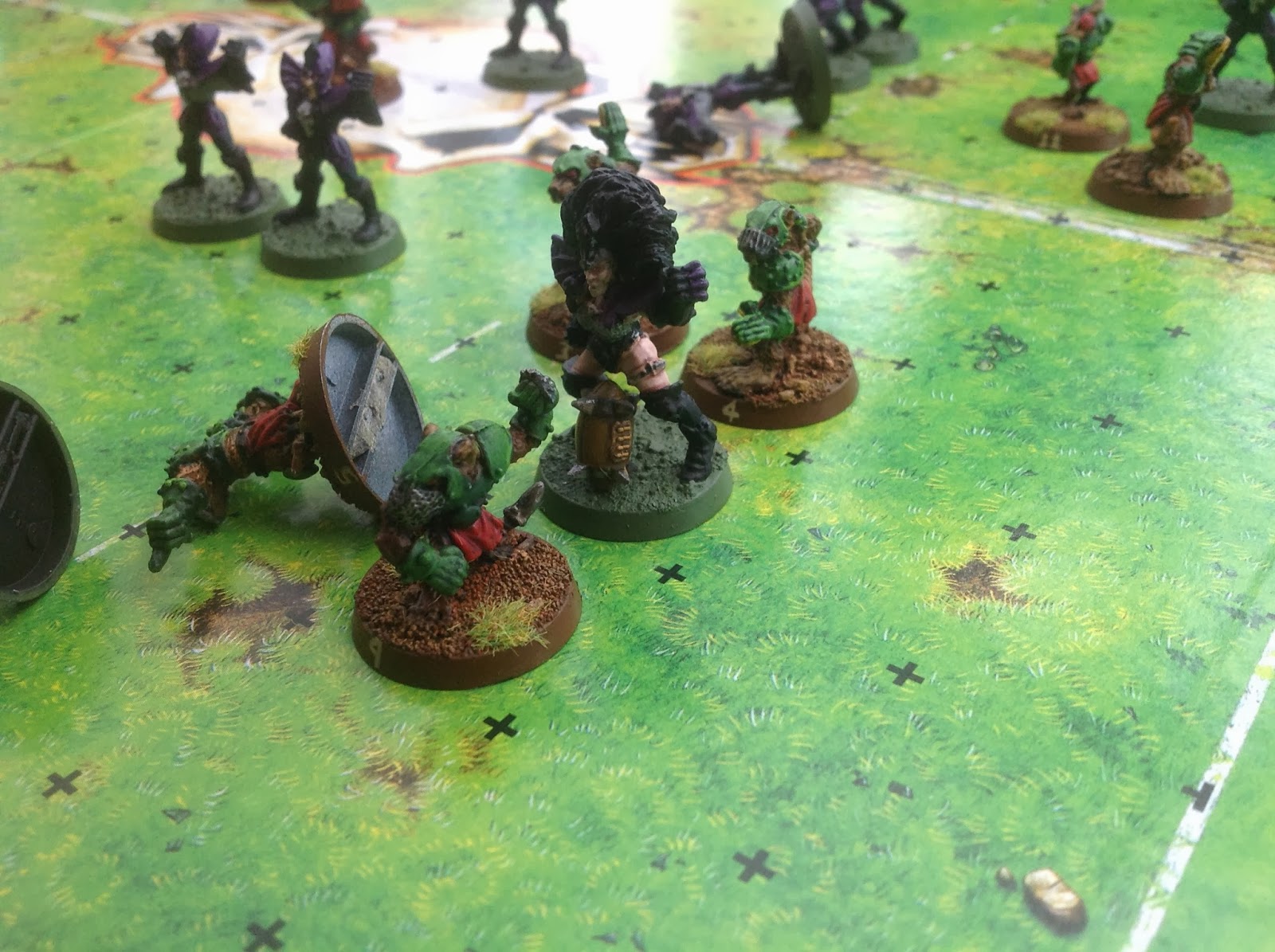 He then dances away, ready to go in for a score. 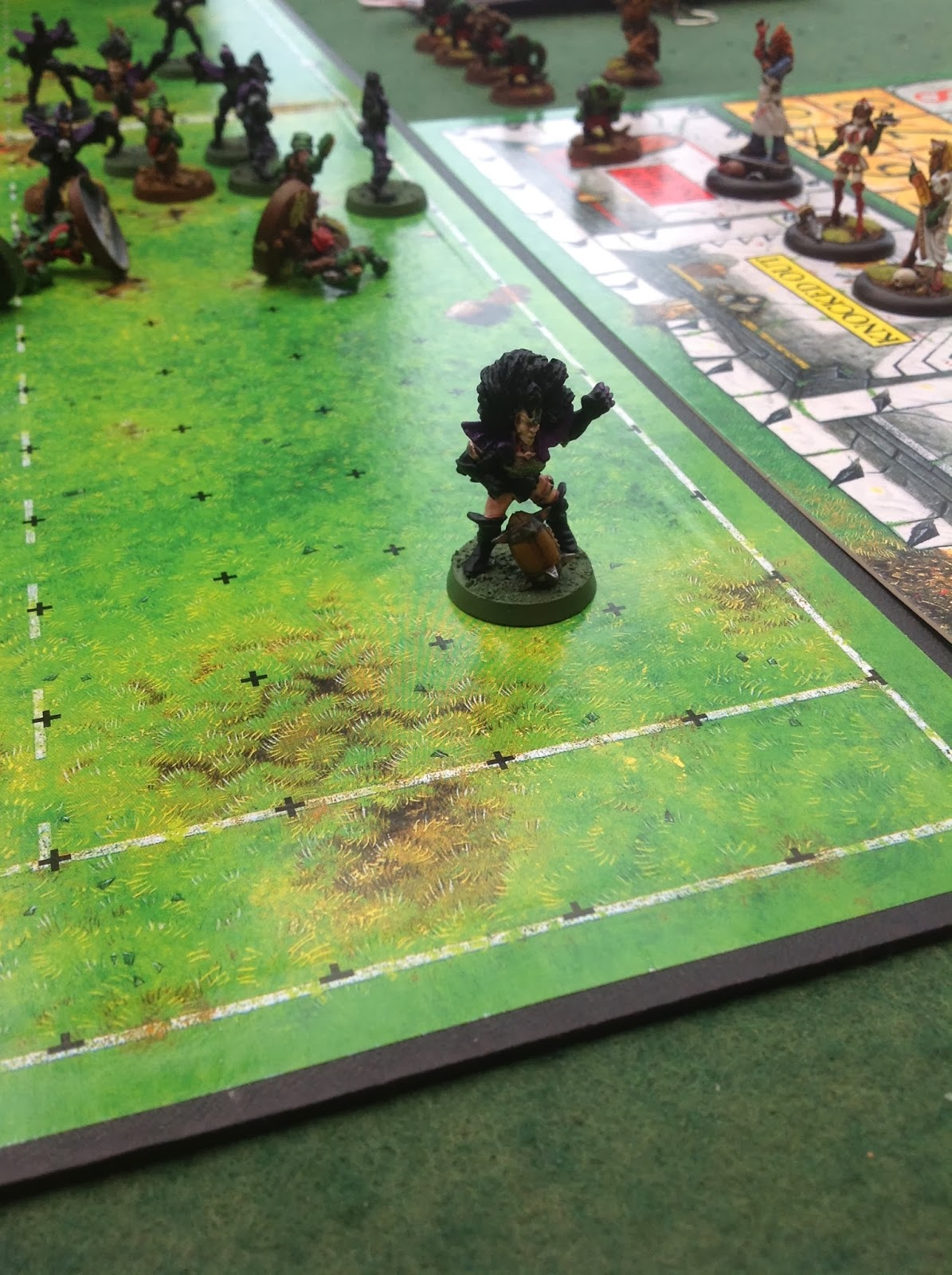 I stupidly tried to get something out of the situation by pushing a Dark Elf into the crowd. I failed and then found my own Thrower on the receiving end of this tactic. 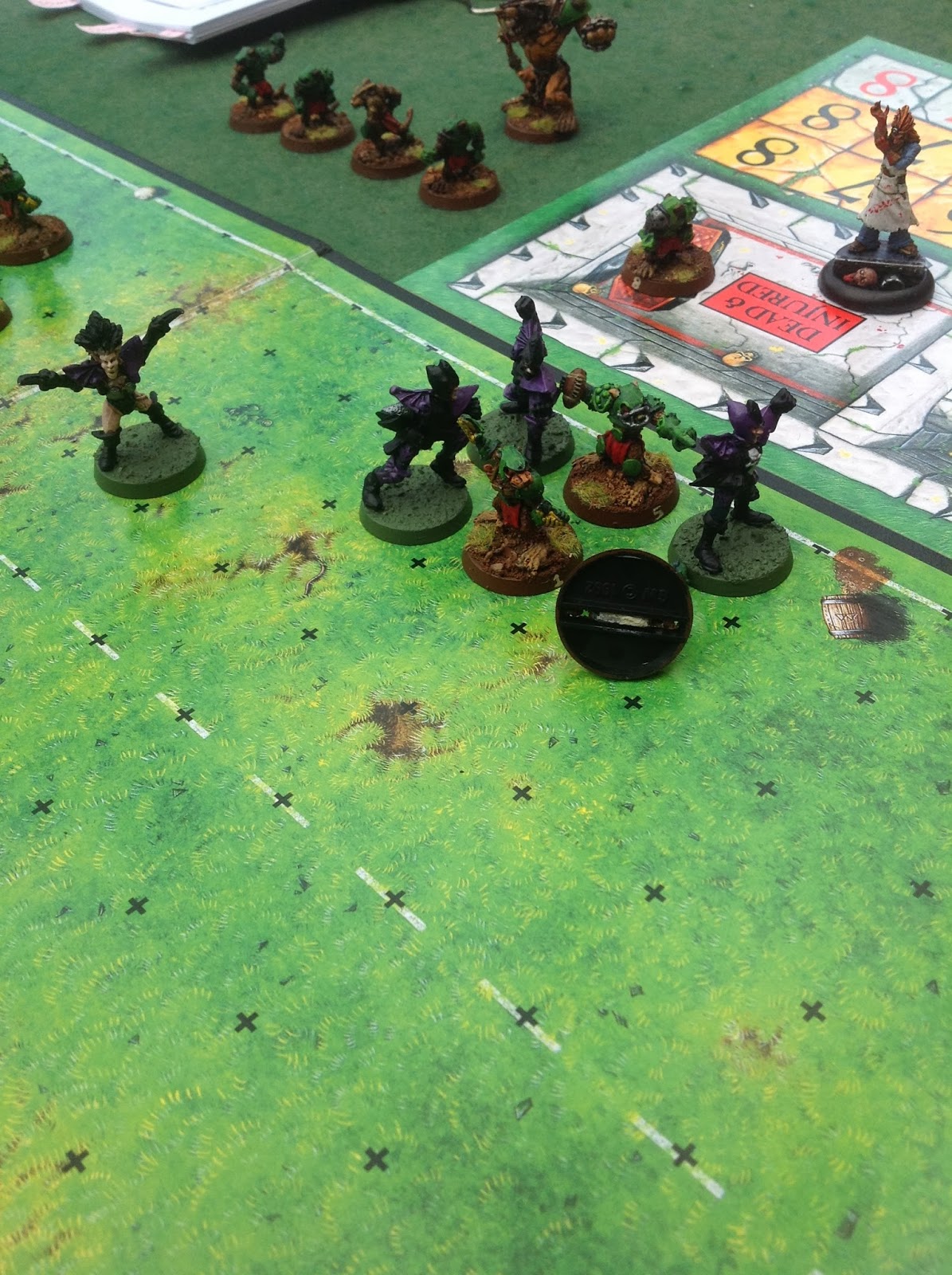 So after a good start I should have been ahead and instead I am 0-1 down with 2 men off the field and my Thrower in the crowd. I was starting to feel like this was going to be a long day at the office.

After the next 'kick off' I play the refused flank tactic to take a lot of the Dark Elves out of the game. I gave the ball to one of my 'Gutter Runners', Plagric Carbunkle. My 'Blockers' and 'Linemen' did their job, caused a couple of casualties of their own and opened up a gap on the left hand side of the line. The remaining 'Gutter Runners' spilled through. It was looking good. The number of players was balancing out and I might be on for a score. 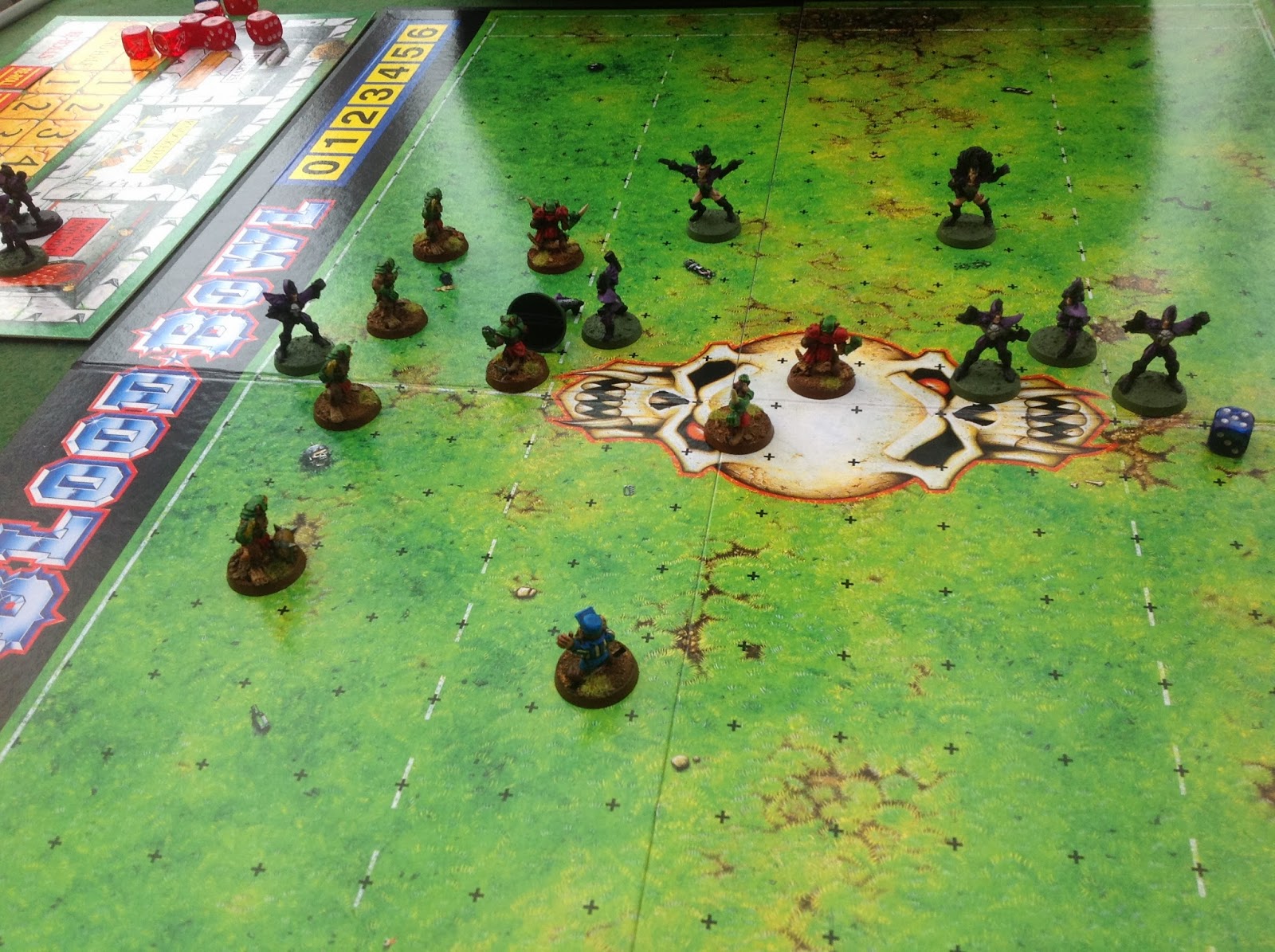 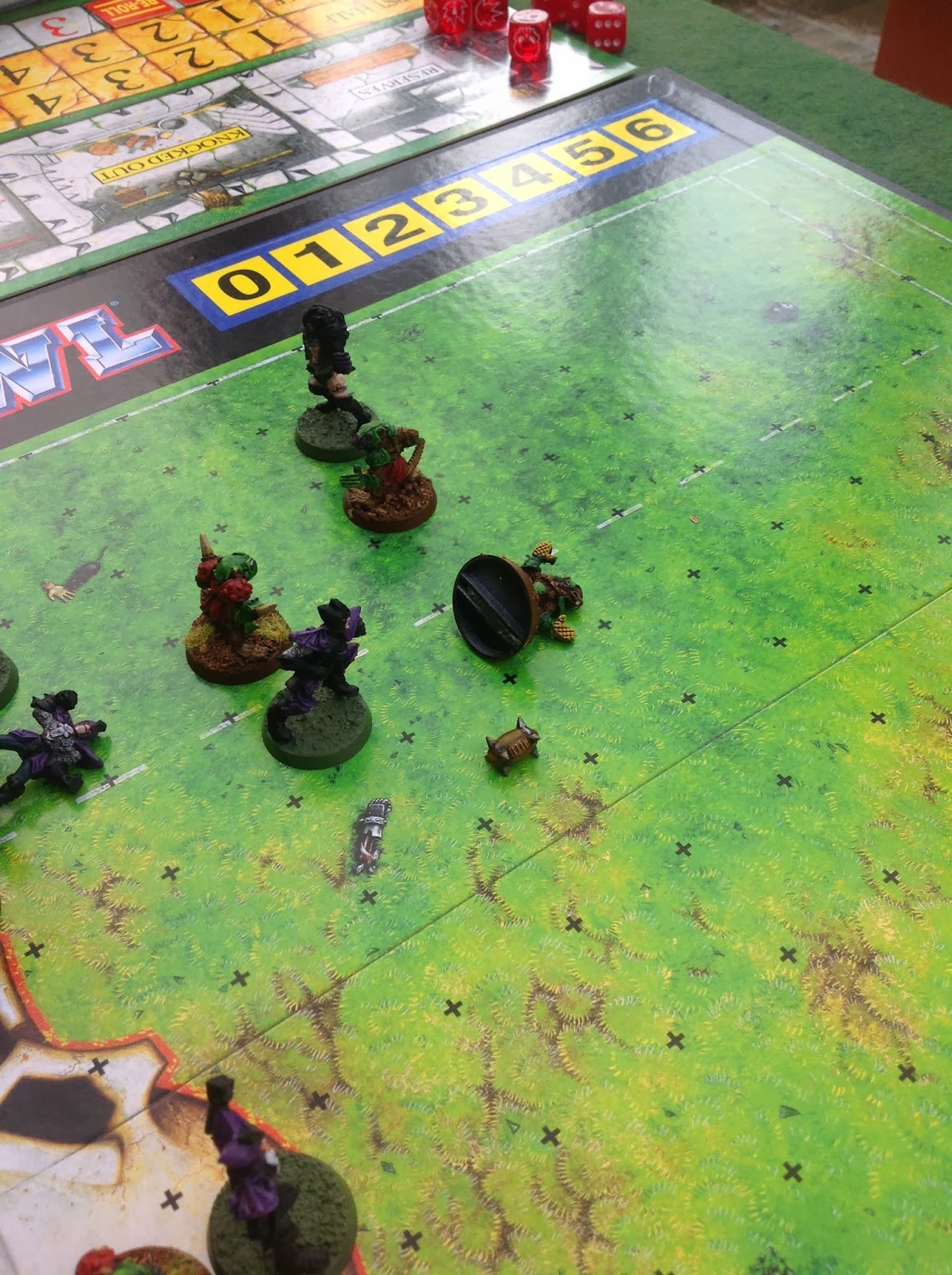 My Gutter Runner who has the Dodge skill - feel over, dropped the ball and caused a 'turnover'. Noooooooooo!!

The Darkblades had 2 turns left to score for a second time.

The excitement level was through the ceiling. The Darktemplar was on the verge of greatness and really putting the game beyond reach. He picked the up the ball and advanced to a position from which the ball could be thrown on the final turn of the half. 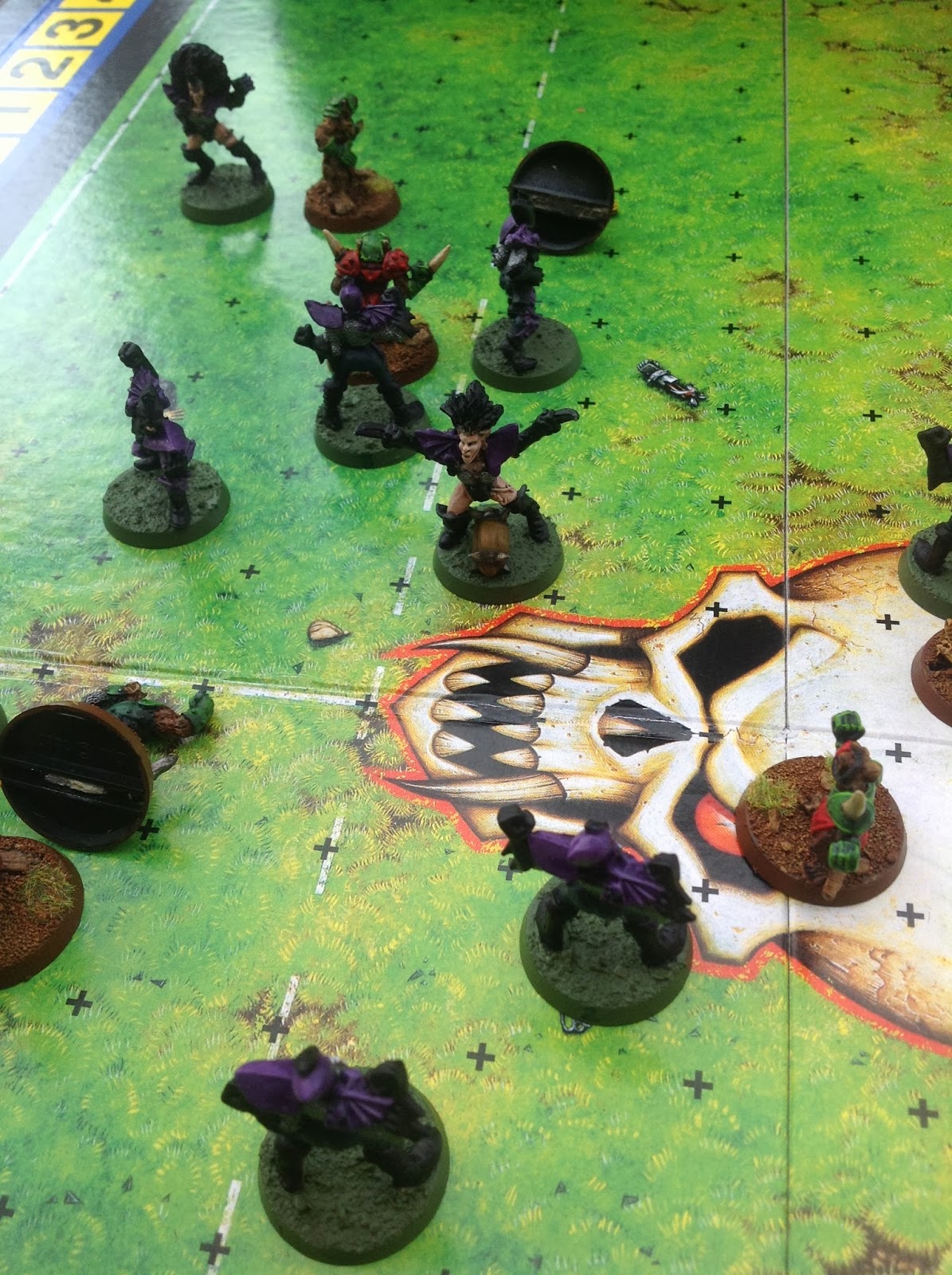 He was determined that no body was going to get in the way and carefully assembled his cage for maximum protection. With all the focus on protecting the ball a major mistake was made - no body was left close enough to the end zone to receive the ball in final turn. A major error indeed and so the half finished with the Darkblades 0-1 ahead.

It was time for Pizza!

This one half had been amazing with much more action than any of the previous games. We were both buzzing. I knew I had made some big blunders and my dice rolling was also letting me down I should have had 2 touchdowns and had none. But on the up side I should really be 0-2 down and I wasn't so there was hope.

My main problem in the second half was that I would be kicking away possession. I needed to get the ball and get a score on the board. So focus now!!

We set up. The ball scattered back close to the end zone and then we rolled on the Kick-off table. A 10 'Blitz', we read what it meant and I got a free turn of moving. Yippie!! Well I could have exploded from the laughter. Just what I needed! 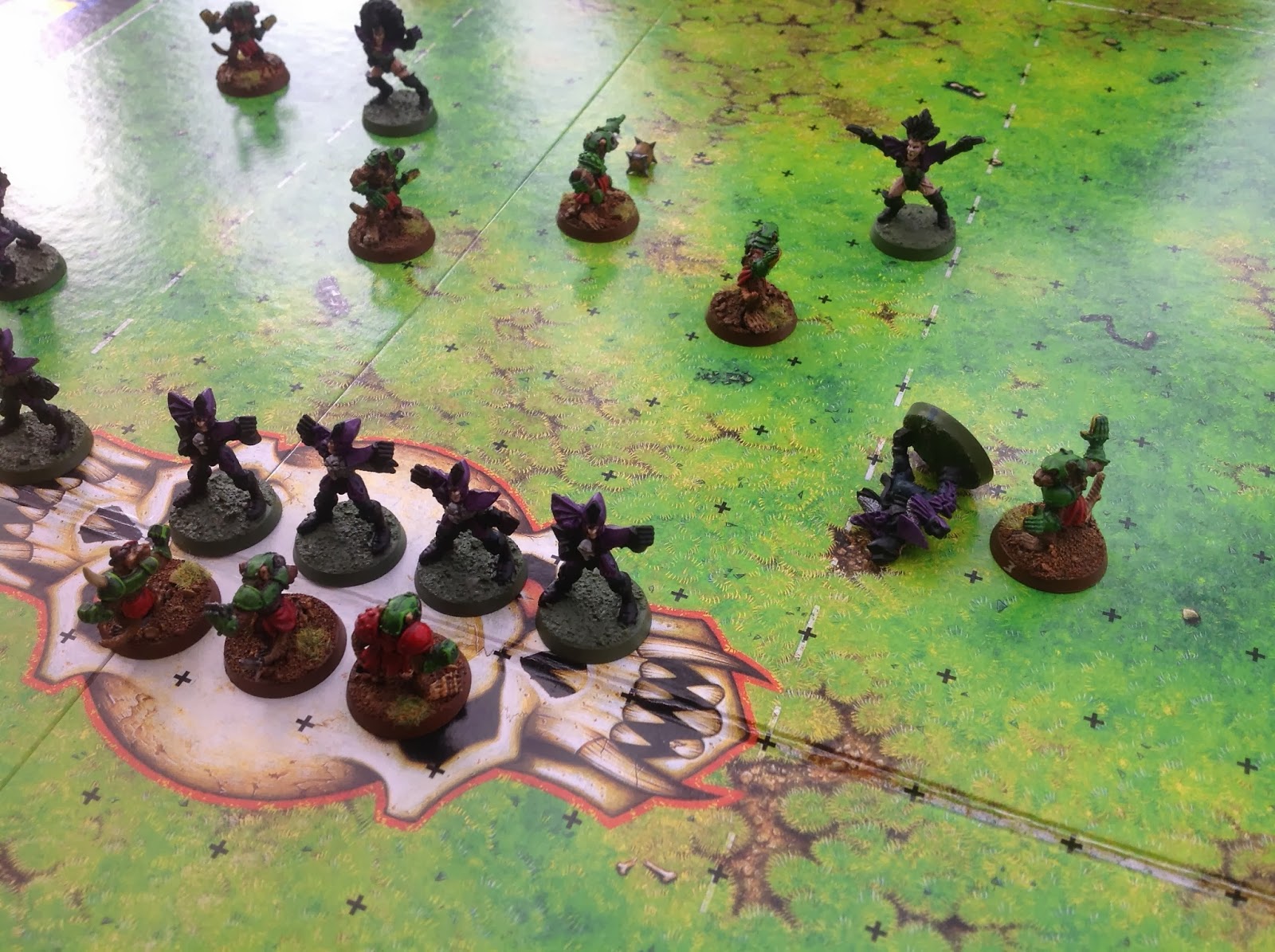 I threw the Gutter Runners forward through the gaps on either side of the pitch. I even got my Thrower (newly returned to the field of play) in on the act by Blitzing a Blitzer to force a gap for himself. It was hilarious, I kid you not. (At least it was from my perspective). The Dark Templar knew that he should have had the game well beyond me and was feeling the pressure that four free running Gutter Runners came bring to bear.

He moved super star Adin Heartrender in to collect the ball. This was done successfully. However cage creation was impossible as he was too far into his own half. He was vulnerable. To compound things I started my turn by Blocking on the line of scrimmage to devastating effect, causing 2 casualties, before mugging Adin Heartrender, capturing the ball and going in for a score! Plagric Carbunkle the scorer. 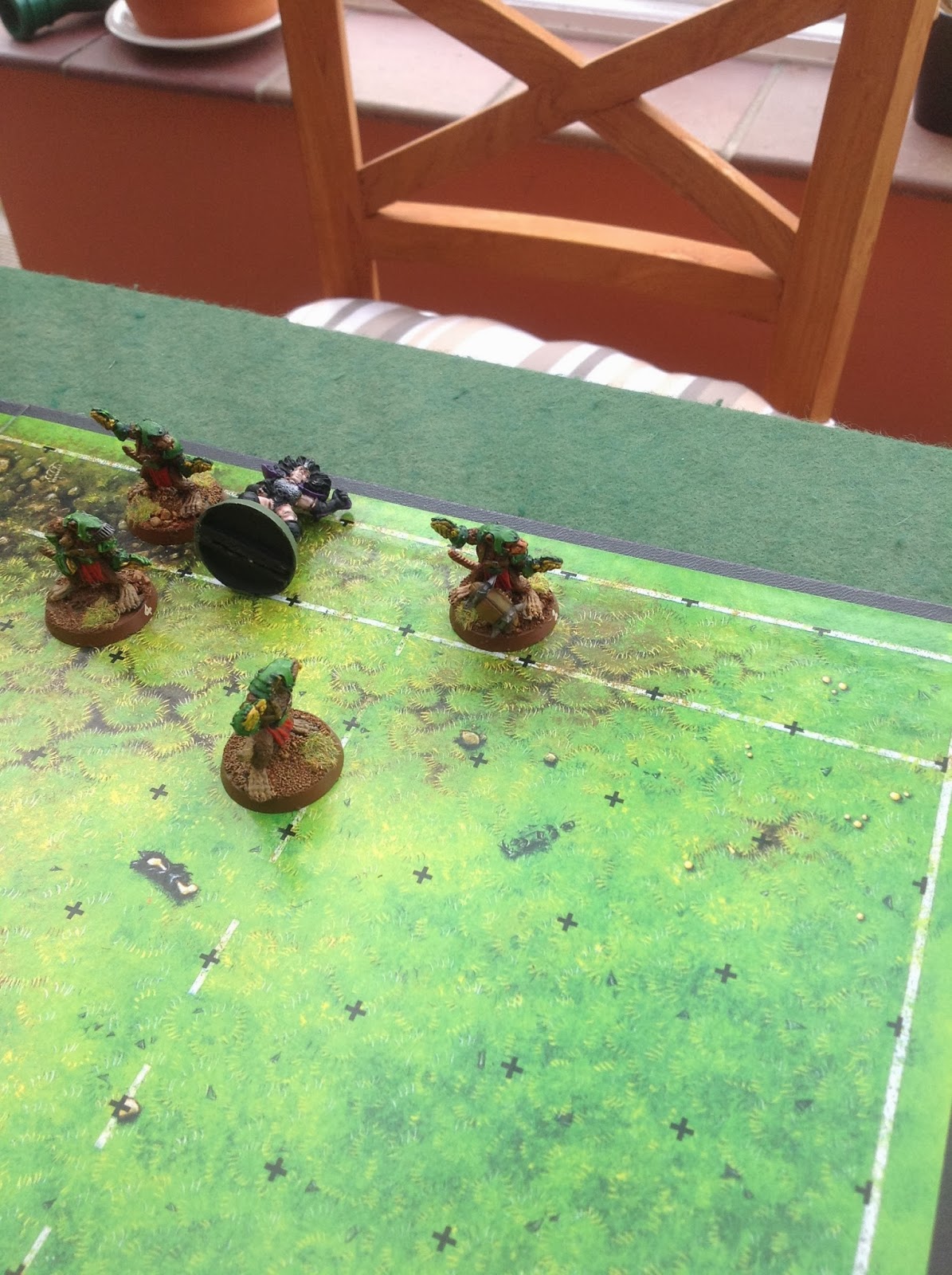 My mirth was effervescent. The Dark Templar couldn't believe what was happening. From an almost unassailable position we were now level and he had 4 men in the Dead pile.

The Dark elves now received the ball, formed a cage 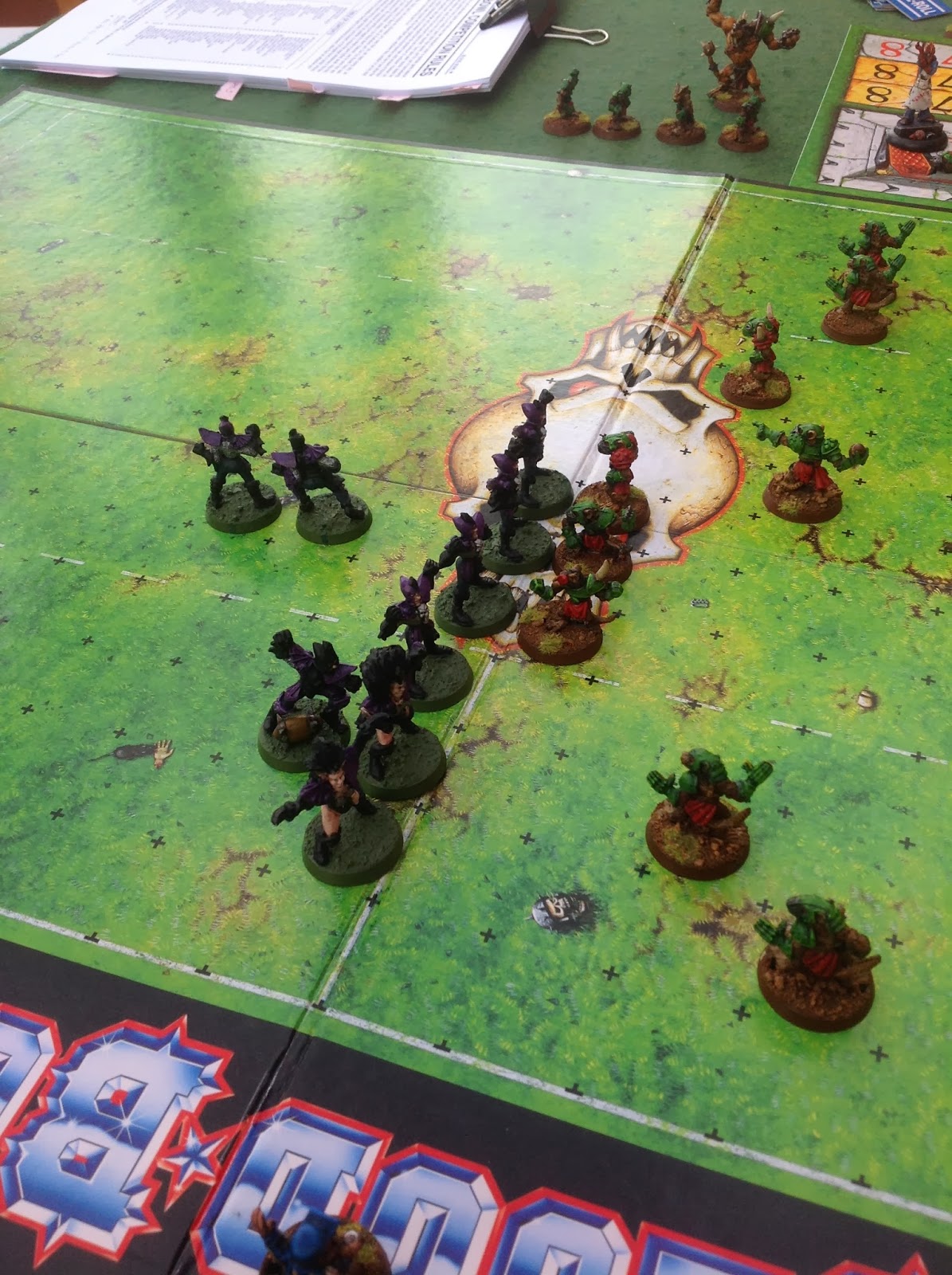 and blasted their way through for a well taken score.

And finally there was just enough time for me to do the same. My Thrower moved around in the pocket 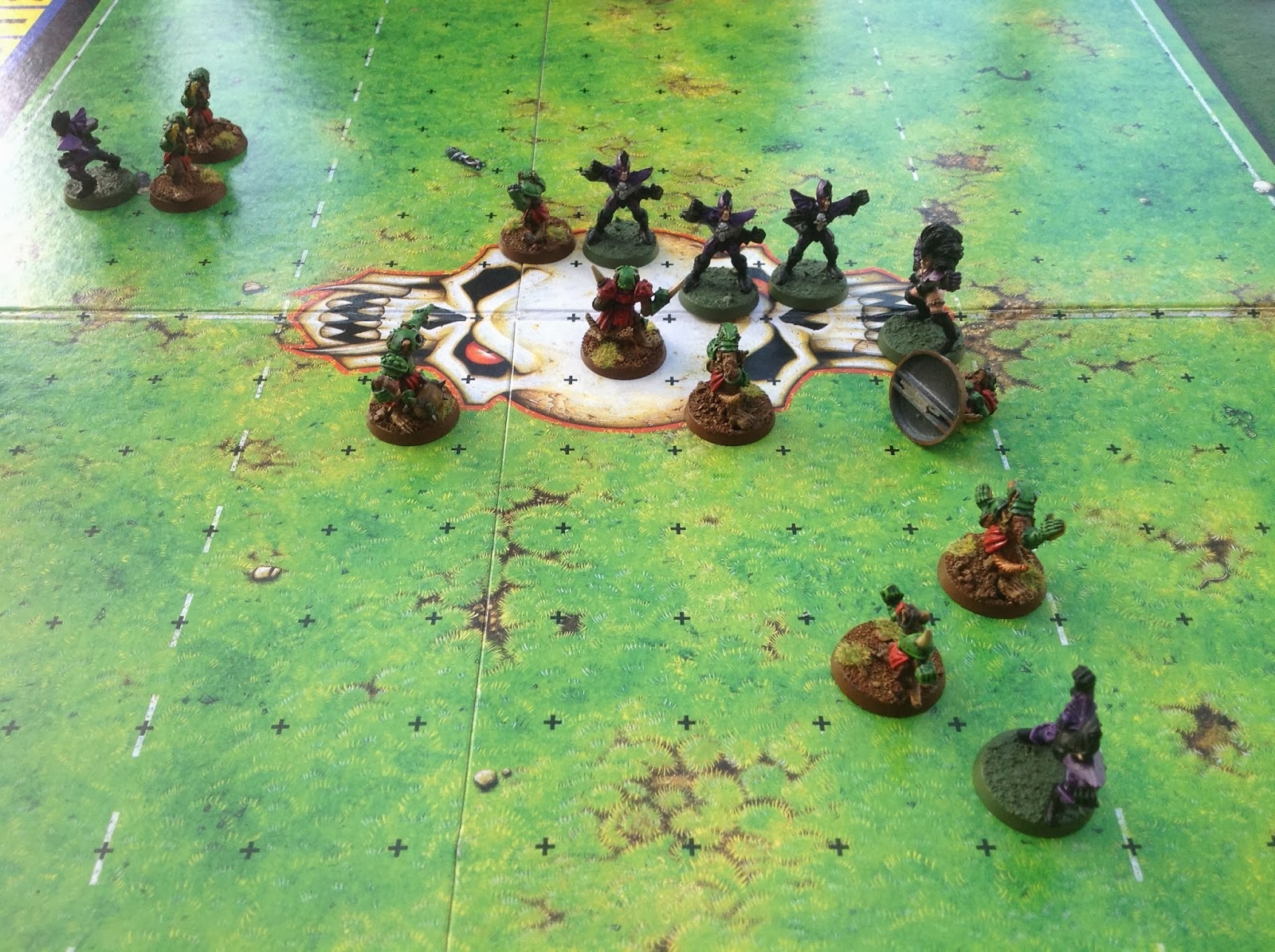 But 2 Blitzers managed to get to at him with a well planned Blitz move. I spilled the ball. 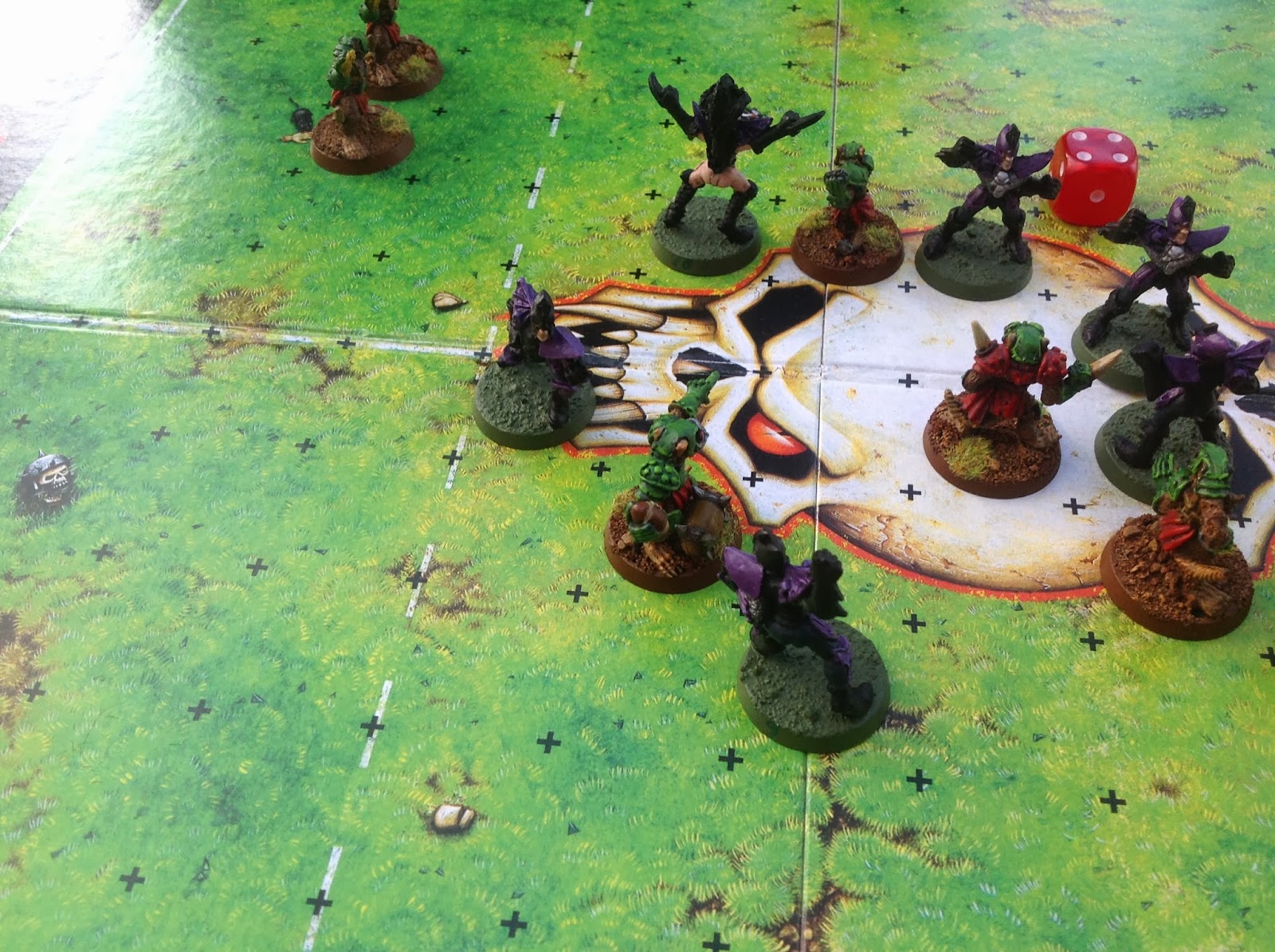 However my Gutter Runner nipped in, picked the ball up and was away to for a touchdown as part of the final turn.

What a hugely eventful day. Overall I scored 2 touchdowns, caused 3 casualties and completed a successful pass. The MVP was my Gutter Runner Plagric Carbunkle (no. 1) with a successful Pass and a TD of his own. We rolled for him and he will get a new skill. I also have £60k to spend. Plagric - a name to be remembered and feared for the future.

Thanks to the Dark Templar for being a great sport and contributing to a great days fun and merriment. Now I need to read up on skill allocation....