After our game this week I had acquired a lot of SPP's. Three players had new skills to choose. A new Black Orc, A new Blitzer and Karfu my Orc super Blitzer who already had the Mighty Blow upgrade.

I think the easy choice is to give the Black Orc, Block. It had worked well for the first Black Orc upgrade.

The Blitzer is questionable. Number 11, Pergu Nail Snapper, scored two touchdowns and was awarded Most Valuable Player. His current tally of SPP's is fourteen and therefore very close to his next upgrade. So do I make him into another Killer Blitzer following Karfu's footsteps or do I go for a Support Blitzer. I am leaning towards the Support role.

I am looking at Guard and Tackle.

Guard means you always assist in a Block even if you are in another players tackle zone. I can see that being used a lot.

Tackle means that players standing in my tackle zone can't use their Dodge skill. On the whole, at at this early stage I think that Guard will be used more in the games. So Guard it is.

And now to the main man - Karfu! 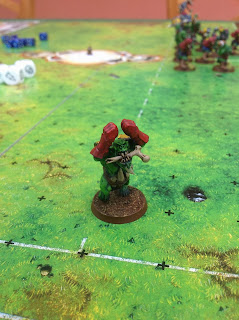 He had a great game and has become a real menace. Giving him a second skill will only increase his threat. But what to give him. I am looking at Piling On and Frenzy as my main options.

Piling On sounds good but has a downside in that you finish as 'Prone' lying face up on the field, vulnerable. The upside is that you can force a knocked down player to reroll either the Armour or Injury dice. Good at increasing your casualty causing.

Frenzy sounds great - the player turns into a 'slavering psychopath'. Here, if the opponent is Pushed Back or Defender Stumbles you must follow up and Block him again. This could be great for opening up holes in the line or breaking through cages. Perhaps the downside is that the action must be taken. There is no choice. The second Block might not have the assists that the first had. So there is potential downside.

I am swaying towards Frenzy, probably because you finish standing up, but some more thought required.

All advice gratefully received.
Posted by Bullcher Feb at 05:43