I have been working on some new Blitzer models for the Orcland Raiders. I have four in the team at the moment and three of them are the same plastic orc blitzer model. I replaced one standard model for Karfu last week using one of the Savage Orcs from Warhammer. This was a great idea because the new model is oozing personality and was great fun to play. 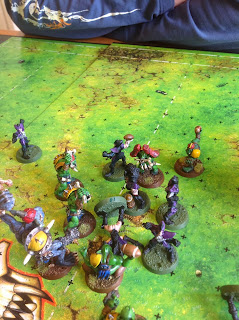 Here he is at his intimidating best closing in on the Dark Elf ball carrier.

Well one of the other Blitzers had a great game, scoring two touchdowns and gaining MVP. He deserved to have his own model. I thought I would replace all 3 when I was at it. There are actually four Savage Orcs models that are in running stance - so very appropriate. I give you the new orc Blitzers. 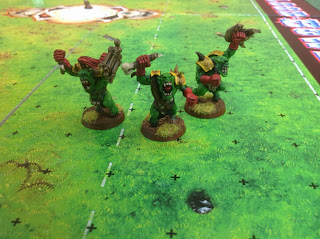 Still early days on the painting front but they do look intimidating. Pergu Nail Snapper has just gained the Guard skill so he will be the guy on the right with the single spike on his shoulder.

The next project will be a Skaven team. I think the Boomtown Rats will be a suitable name.

I used to really like playing the Skaven in the past. So fast, so fragile, so funny.
Posted by Bullcher Feb at 06:12