It only seemed right that the developing players should get a little tender loving care. Two players had moved along and picked an extra skill.

Black Orc - 'Vultog Flame Basher' acquired Block which seriously improves his blocking skill. (by 16.66%) I thought that I would add to his model making him stand out from the other Black Orcs.

First I built a hat from green stuff and some bits from the Orc Bitz Box. I went for the 'broken horn' look. 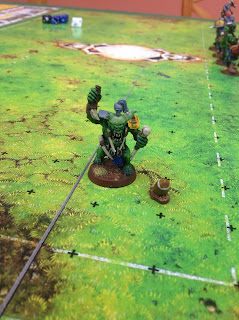 I also added another shoulder pad. I went for something smaller than the one on the left. 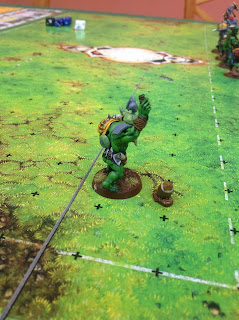 Finally I added a disk to the bottom of the left shoulder pad. This can be used to write his number on and keep him looking the same as his team mates. 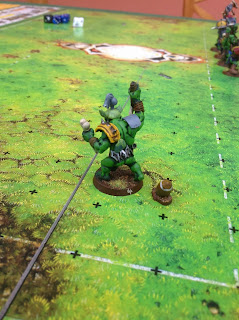 Blitzer - Karfu Eye Cutter acquired Mighty Blow. In future when he knocks down opposition players they will have to add '1' to their AV roll or add '1' to the Injury Table roll (Ouch!!) making it more likely that he will cause serious damage. My existing Blitzer model are the same. I figured that a 'new build' was appropriate. Karfu actually has the most SPP's on the team with 10. In game 2 he caused a casualty, scored a touchdown and was the MVP. A bit of a superman really. He is therefore closest to getting a second skill and becoming a bit of a monster.

I returned to the Warhammer Savage Orcs box set. There is a running orc model with only one foot on the floor (in fact 4 of them...how fitting) So I picked the one I liked best. I do like the head, a broken undead limb in his mouth. 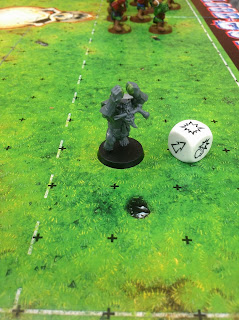 I went for the 'both hands in the air' look. You can feel the 'mighty blow' that he is about to deliver. 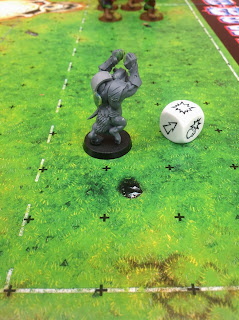 I added shoulder pads and again used some green stuff to make the metal disk for his number.

Now if it would only stop raining I could get outside to put some primer on him. But that doesn't look likely today.

In summary our narrative is developing nicely.....

Karfu Eye Cutter (Blitzer) is the current 'super star' and will be the one to watch going forward.

What next? - we are discussing an away match later in the week and not sure who the opposition will be yet, Dark Elves, Humans, Undead or maybe even Khemri? Will Nuffle be sated by the much anticipated Auzzie coloured Block dice? Bring it on.