Yes folks, its true - the Orcland Raiders have signed up a new Thrower. Mr 'Popeye Wind Rider' a very popular choice with fans. Here he is in his first team photo wearing the Raider colours. 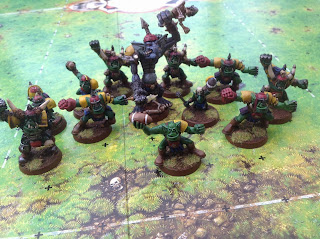 You can see old 'Boghat Dragon Shooter' in the back there sporting the yellow stripe on his helmet. He is missing the next game with a mear 'gouged eye'. This is not going down well with the fans and talk has started about that yellow stripe travelling further south, right down his spine.

This is a real opportunity for 'Popeye'. If he can put in a good performance and earn some Star Player Points he may find himself being first choice. Old Boghat didn't see much of the first game, being pushed off the field in turn six and certainly did not earn even one Star Player Point.

And folks - rumours of a rematch surfaced today. We understand that this could be as soon as the weekend. Oh my - this is exciting!

We are also hearing stories that the Orcland Raider coaching staff felt the first game was far to 'clean'. Not one of da boyz 'stuck the boot in'. This is very unorc'ish indeed. Some of the players were held back after practice today and did some 'additional work' away from prying eyes. Emmmm - I think that a few more of those Gravesend Gutchewers might be coffin bound after the next match.

Bring on the Christmas Gaming.
Posted by Bullcher Feb at 11:25