What a day - what a day. Well I guess the Orcland Raider fans will be going home happy this evening. Could there have been more drama? I think not!! There are some days when gaming is just fantastic fun, the highs, the lows, they were extreme. Would we have it any other way - I think not.

And a certain somebody has got 'game ball' and will be sticking it in his trophy cabinet as a keepsake. 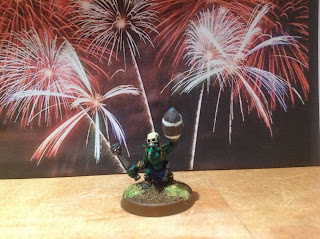 Yakstick Sticky Hand - you Da Gobo dude!!! (background suggested by the Dark Templar - although I have no photoshop skills, so this is my best low technology attempt)

So two games and 2 victories by 1-0. Both touchdowns scored by the goblin of all goblins Mr Yakstick himself. A truly unbelievable day. Never was someone so ineptly named. At one point Yakstick actually rolled six '1's' in row as he attempted to pick up the ball. (Yes, a lot of team rerolls were used, over a number of turns) This was interspersed by the Dark Templar actually rolling a double, double skull to block - no team rerolls left = 2 turns passed. I mean the dice were just insane - but it added to the atmosphere and the orc fans have gone home happy, happy, happy.

The goblin ability to ignore tackle zones and dodge like a man possessed proved to be the difference on the day. There were many attempts to Block him out of the game but he survived and ultimately triumphed.

Thankfully there were no lasting injuries to either side.

Lots of lessons to be considered and some decisions to be made on spending some of the cash. I think they will wait for another day.

Other than that I think it safe to say that the Gravesend Gutchewers will not be underestimating a goblin called Yakstick any time some.

There are days when I just love Blood Bowl!! I have not laughed so much in ages.

Thanks to the Dark Templar and  28mm victorian warfare for the games. Hey - Victorian Warfare - you just know that there is an elf in you somewhere that wants to Throw and Pass!! I sense a free flowing style in you .....