The key element of Blood Bowl is Blocking. Block or be Blocked that is how damage is done.

Obviously some teams love to Throw and Catch the ball with their fast players Dodging their way through tackle zones but at some point the game boils down to Block or be Blocked and Black Orcs are built for this task. 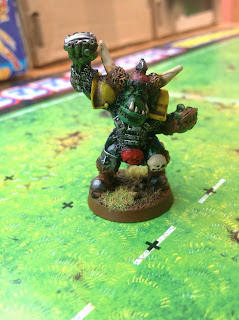 The Orcland Raiders line is lead by the fearsome number 4, Vultog Flame Basher.

Black Orc and has the following stats MA4, ST4, AG2, AV9 with no special skills.

Movement Allowance is slow with the MA4 allowing only 4 squares of movement. This is below average, so not built for speed. Agility of 2 is really low so no dancing and dodging in the game plan. (Does Vultog look bothered? - I think not) The upside is a Strength of 4 and Armour Value of 9, both above average. This means that they can dish out damage as well as take the hits themselves.

The aim of a Block is to move the opponent around. Force them to a square they don't want to be on or better still knock them to the ground and injure them. This is how holes can be created in the defence line. Each standing player has a tackle zone surrounding their square. It is difficult to move through tackle zones. If you can force players, and their tackle zones,  apart then free moving lanes can be created for the team to exploit.

Blocking is based on ST. The player who is blocking must be adjacent to his target in order to perform a Block. The stronger player has the advantage. When performing a Block the player rolls special Blocking dice. If both players are equal ST then one dice is rolled. If one player is stronger than the other then two dice are rolled and the stronger player chooses which dice to use for the result. This is a big advantage!

The dice themselves are D6 and look like this. 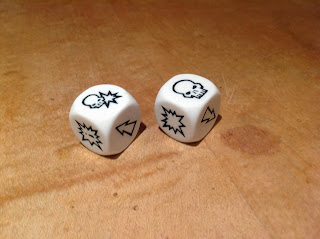 The preferred outcome is to push the opposing team back and there is a 66.66% chance of this happening. And then there is the bonus of maybe Knocking him Down as well (33.33% chance without Dodge, 16.66% chance with Dodge)

From a Black Orc perspective this has implications. If Blocking they will usually have the greater ST and so will use two dice and choose the outcome. If being Blocked the opponent will use one dice. And even if the Black Orc is unlucky enough to be Knocked Down they are likely to survive the Armour Roll with an AV of 9. (2D6 less than or equal to 9)

Back in the day I think there was a limit on the Black Orcs and Blitzers. I seem to recall playing with two of each and a whole lot on Linesmen. Well things have moved on and you can now have 0-4 Black Orcs. So to my mind it would seem like a good idea to field all 4 of the Black Orcs available. 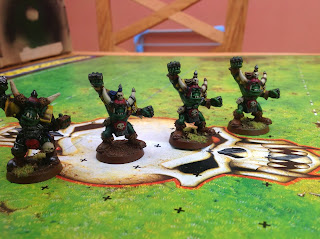 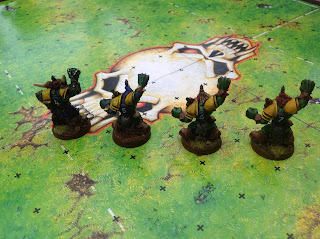 Welcome to the Orcland Raiders fellas!!
Posted by Bullcher Feb at 02:56