Yes sports fans its all excitement down here at the Orcland Raiders HQ. The opening series of the new season has been announced and the Orcland Raiders will be hosting a team of Dark Elves on Saturday the 21th December. A real date for the diary that one.

Today the team was out on the main field and I must say that the grounds men have done a great job. Bolgrot Ripper is really settling in well. Already buddying up with the Black Orcs I see. You just know they are going to do some serious damage in the season ahead. 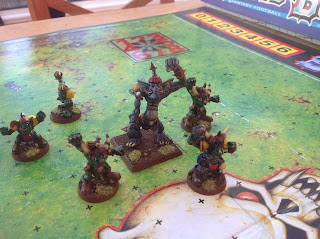 But whats this I notice? A few new faces. Ah Yes - we have a new Orc Linesman folks and he is taking the number one jersey. If I'm not mistaken thats Dergu Bear Licker. He must be a recent transfer from the Gouged Eye. 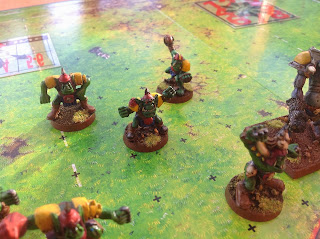 And lining up beside him in the number three jersey is a new Orc Thrower. We had heard rumours that Boghat Dragon Shooter was on his way and it looks like that can be confirmed. 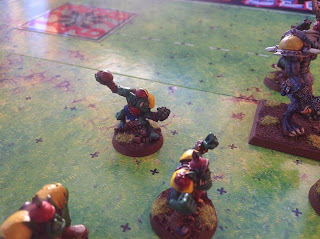 I see that Boghat has maintained the yellow stripe on his helmet. That has been a tradition of his since his college days. There were some rumours last year that that stripe had travelled to his spine. Lets hope coach Bullcher knows what he doing. 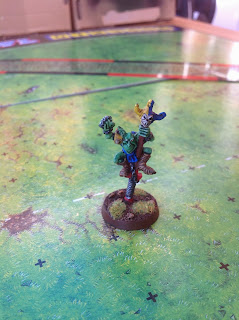 Folks its another star player - Scrappa Sorehead and in the full Orcland Raiders colours. Oh my, oh my - what a season we have in prospect!! 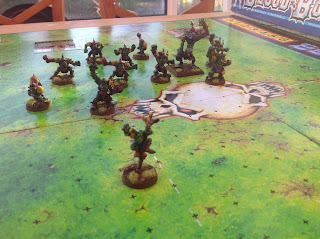 Could that be a smile on Varag Goul Chewers face. I see he working with the Blitzers today. He must be relishing the opportunities that this new Orcland Raiders lineup will afford coach Bullcher. Bring on Series 1 and those Dark Elves. Lets see what this team is made of.
Posted by Bullcher Feb at 05:04