There there are 9 days to go until the first Orcland Raider series and coach Bullcher has some decisions to make regarding the team composition.

Orc teams are built for punishment and running the ball. This means gathering the ball, protecting the ball carrier, creating holes in the opposition line, bursting through and finally scoring. Orcs do have access to Throwers but do not have any Catchers (unless we look to a goblin or two). What then is the the roll of the Thrower in an orc lineup and how many should be included in the final team?

Orc teams are allowed 0-2 Throwers whose stats are MA5, ST3, AG3, AV8 and they come with Sure Hands and Pass as their starting skills. They cost 70,000 gp. 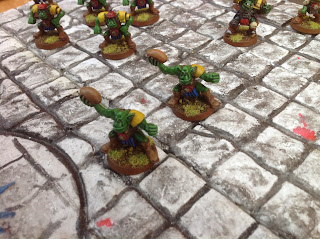 First thing to say is that Throwers are good at picking up the ball because they have Sure Hands which gives them a reroll if they fail on the first attempt. The pick up action is based on the Throwers AG of 3. This means that the Thrower needs a 4+ to pick up the ball which is modified by +1 for attempting the pick up resulting in a 3+ outcome. So the base success rate is 66.667% which is increased to 88.889% because of the reroll. (Percentages are courtesy of Samba Action Calculator - an Application well worth a look if you into that kind of thing.) Thats 22% better than other Orcs.

In terms of carrying the ball Sure Hands negates the skill Strip Ball which is a positive. The Thrower is generally slow though with an MA5. In Orc terms that is only one less than a Blitzer who is the fastest moving orc with an MA6. So not a huge draw back and the ball carrier should be in some kind of protective cage and the Black Orcs only have an MA4.

Also, lets face it, if the Thrower is carrying the ball then this frees up a Blitzer (the other likely ball carrier) to do his thing.

Probably the main thing to be said about the Thrower is that he gives the threat of a Pass. The Pass skill allows a reroll if the first attempt fails. With an AG3 the Thrower will need 4+ to successfully Throw and this is modified by +1 for Throwing a Quick Pass. The base success rate is as above i.e. 66.667% increased to 88.889% with the reroll. For this reason the Pass is more likely to be be a Quick / Short Pass because there is an automatic +1 Catch modifier for an accurate pass. As the Orcs don't have Catchers they do not benefit from the Catch skill which gives a free reroll. However there is always the Team Reroll to consider. This could be given to the potential catcher, probably only once a game, but the possibility for a successful Long Bomb suddenly looms large.

With the Thrower on the field the Pass threat is always there and as such the opposition will have to consider some kind of zone coverage depending on how the play develops.

I think the case is made for least one Thrower in the side. The question is whether to include two from the start or to trust in the great gods Gork & Mork until later in the season. Throwers cost 70,000 gp this is 20,000 gp more than a Lineman and 10,000 less than a Black Orc or Blitzer so lets look at the rest of the options before making a final decision.