More breaking news. The Dark Elves have taken flight and a new opponent has 'arisen'. The  Gravesend Gut Chewers , an undead team. 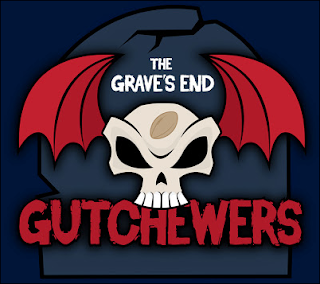 I needed a new goblin. Last nights discussion made it clear that taking Scrappa Sorehead was not the way forward so I give you 'Yakstick Sticky Hand' the latest member of the Orcland Raiders. 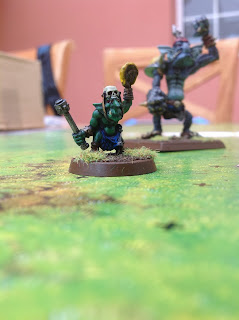 There is still some work to do but I got to tell you that I just love his hat!!!

I went looking in the garage for a suitable model and came across some plastic Gretchin. Having had a rummage I couldn't believe my luck when I discovered one with an undead skull on his head. This is what he should look like in Warhammer 40k. 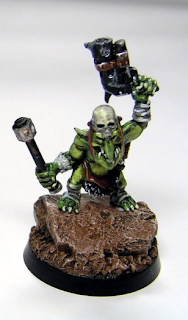 I took off the gun with snippers. 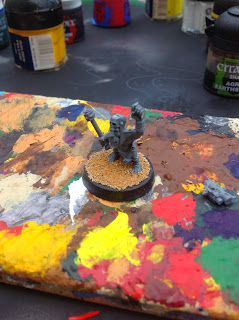 And then went to work with some green stuff to create a catching mitten. 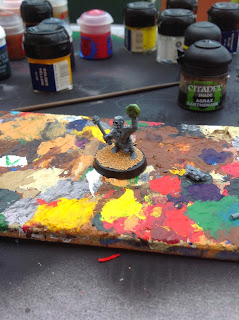 I later reduced the length of his nose. It was that big it might get in the way of a catch!! The nice thing is that he looks a bit like Bolgrot. Left hand in the air and a nice round exposed tummy. I sure hope they get along.

The team is allowed to select 0-4 Goblins on the team. They cost 40,000 gp, which is cheap and have the following statistics MA6, ST2, AG3, AV7. They also start with Right Stuff, Dodge & Stunty.

1. Right Stuff allows them to be thrown by a Troll
2. Dodge allows one failed Dodge to be rerolled each turn - very good skill
3. Stunty allows the goblin to ignore Tackle Zones modifiers i.e. Dodging on a 3+ anywhere, reduces the ability to Throw and makes the Goblin more susceptible to injury

So in short they are fast and agile and have good Dodge modifiers. They can Catch as good as any Orc which is not great but when combined with their speed and agility makes them a good option. They also allow the Troll to consider the Throw Team-Mate options. They may also be considered for ball carrying duty. In this way they will be automatically protected and can dart out at the right time for the big score.

On the down side their low ST and AV means they are very easily hurt and will therefore need protection!

I think that having a Goblin will be fun so .... have a jersey Mr Yakstick Sticky Hand and welcome to the Orcland Raiders!