The game against the Gut Chewers was great fun. It moved fairly slowly as we were getting back into the rules but at the end of the day a lot was learned?? So this is me thinking out loud .....

The edge of the board is not your friend! In Blood Bowl teams are supported by large crowds of enthusiastic supporters. Should any player leave the field of play they are set upon. This is not a good thing. There are no saving dice rolls applied and the player goes straight to the Dead / Injured box. You miss the rest of the game and there is potential for longer term trouble when rolling on the Casualty Table at the end of the game.

In short this is the best way to damage the opposition and therefore something to be very aware of both on offence and defence.

It is worth taking a risk to push an opposition player off the field! 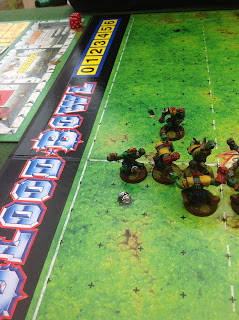 I lost my Thrower from this 'safe looking' position. A few well organised 'Push Backs' and I was off the board.

Team rerolls are important. They are expensive but they are your one protection against the vagaries  of the dice gods. I started with 2 but I had a Cheerleader and an Assistant Coach which increased my chance to get another free reroll on the Kick Off table. A roll of 6 or 8 triggers this. For two of the three halves that we played I benefited from this.

Don't waste a reroll. When you are out of rerolls bad things can, and usually do, happen at crucial points in the game. Think before you use a reroll. Is it really worth it early in the game? What is the upside you are looking to achieve?

You have to pick the ball up! Seems obvious but if you are not in possession then you can't score. It is good to have someone that has an increased chance of picking the ball up. Failing to pick the ball up is also a Turnover so it is even more important to have the right player doing the job. The orc Thrower is the best person on the Orcland Raider team for the task as he comes with 'Sure Hands', a free reroll should he fail to pick up the ball first time.

I lost my Thrower during game one and really missed him. The ball seemed to turn into a bar of soap after that ;-)

Doing nothing is better than doing something stupid We all feel the pressure to move and score but there is no need to over commit. Be patient, apply some slow pressure, let things develop, sometimes you can just get plain lucky.

It is better to not risk a chancy Block so that your player stays on his feet with his tackle zone intact. This puts a different kind of pressure on the defender who may, in turn, make a mistake. This is particularly true of the troll. His use in the game is to be a road block - this can rapidly turn into a large hole if he is forced to the ground.

Zone defence. You can reach a point where it is more important to fall back than to continue to pressure the ball. Its about having a plan B if plan A is stalling. A regroup can be a good thing and can allow time for players to get back on their feet.

The half is 8 turns long Remember that you have to have a plan to score within the turns that remain. This puts pressure on slow moving teams and sometimes you have to take risks to give yourself the chance. You have the 'Go for it' rule and there are times when it essential to use it. Factor it into your plans.

At the end of turn six, in game one, I managed to get myself out of a very tricky situation. There was both judgement and luck involved. At the end of the turn as I proudly surveyed the safe position that I had achieved (my Blitzers in possession of the ball tucked in behind a Black Orc alongside the troll) I realised that I could not score in turns remaining. 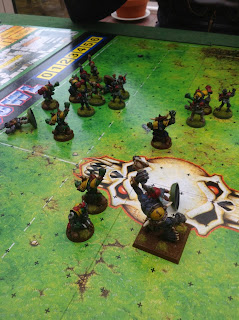 Fouling has its place We didn't really do this at all which was a missed opportunity. It is another method of getting rid of players from the field and remember that assisting players force +1 per player to the Armour roll. It is worth ganging up on a downed player and sticking the boot in, especially a high value player.

We play for fun at the end of the day we play this mad game to have a good time, to be with friends, to laugh out loud and revel in the stories that develop. We had a great day. I have not laughed so loud in ages. The build up was also fun. Assembling the team, poking fun at the opposition, buying on ebay, painting up the team and crowing loudly. I reckon that we had a good months worth of fun from this one game. Blood Bowl we love you. May the next venture be equally good.