2-0 but Da Gobo bites the bucket

Hi there Blood Bowl fans. Today saw the much awaited rematch between the Orcland Raiders and the Gravesend Gutchewers. What a day, what a day.

Had the Darktemplar managed to organise some coloured 'Block' dice? Would the god 'Nuffle' hamper his efforts? Would the goblin be 'Da Man'? Had the Black Orcs learned how to foul in true Orc'ish style? And would the Mummies be able to do their job, in spite of their tendency to trip over bandages? So many questions........ anticipation .......... and Blood Bowl mania.

The Gutchewers were in town. 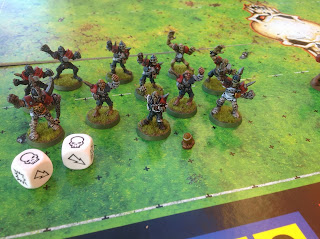 The Dark Templar had painted up the MVP Zombie from game one and he was looking good. Couldn't resist the double skull in front of the Mummy - but surely it couldn't happen again? Could it?

Well the first thing to say is that a big thank you is due to the Dark Templar for his visit today - great fun indeed! A gent.

The game was much different to the first. We were both much more aware of tactics and the game reflected this.

The interesting thing is that the Undead seem incapable of picking up the ball. This is serious in terms of bringing any kind of predictability to the game. This proved a real problem at the beginning of game 2. I took advantage by Throwing Team-mate in the middle of the problem, very funny to have a goblin arrive where he is not wanted. I also applied some Blitzer pressure. 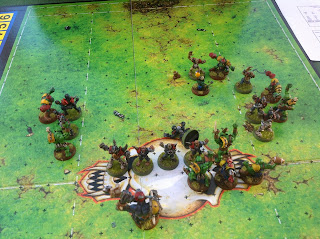 It felt so good to throw the goblin for the first time. Very orc'ish.

However it was tough for the Goblin. Old Yakstick Sticky Hand was bashed about a bit and finally the Gutchewers ganged up and badly fouled him. Foul ref, foul!!! The referee didn't see it and Yakstick ended up in the injury bin. 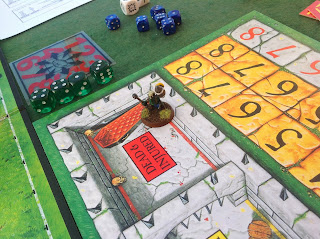 There was a certain amount of jubilation as a promise made on Dark Templar blog was delivered. 'The goblin was going home in a bucket!' I must admit to being somewhat dismayed.

But this was to ignore the 'Nuffle effect'. The Darktemplar has been in total fear of white dice for sooooooo many years. Every time he has tried to use them they have burnt him badly - I'm am being really serious about this. We joked beforehand because coloured 'Block Dice' had been ordered, from Australia but they had not arrived. We talked about the double, double skull and laughed .......

I kid you not - it happened again!!

The Gutchewers couldn't roll dice to save their lives, well they are undead. It was amazing. I felt for the Dark Templar. There was a plan but ......... Nuffle had intervened and did so regularly!

I got the ball and opened up the right hand side of the pitch. 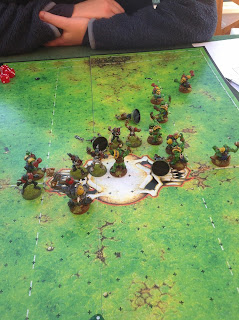 The new Thrower 'Popeye' did the business, picked up the ball, carried, threw the ball and it was successfully caught. Touchdown Orcland Raiders!

Towards the end of the half the Gutchewers lost some players to successful Blocking and Fouling and so started the second half 2 men down. A big disadvantage.

The Raiders were also receiving! A good offence position. We suffered a Blitz at Kickoff. Wow - that was interesting. Puts you on the back foot a bit. 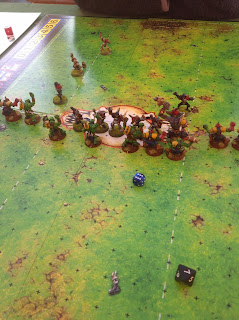 I had stood off the Gutchewers but the Blitz allowed them to get right in my face. A painful start to the the half. However I did manage a second Touchdown  to make it a 2-0 result. 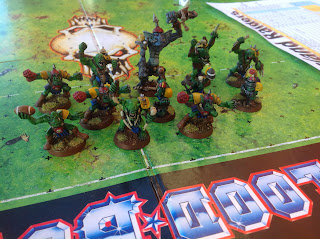 I have some new skills, a Blitzer with Mighty Blow and a Blocker with Block. I also have a new team reroll. Getting stronger all the time.

The orcs remain the team to beat but I got to say that 'Nuffle' played a big part and I am eternally grateful. Thank you great god.