I have been looking at options and have come up with the following crew which uses Deathstroke and has an emphasis on ranged abilities. Batman does spend a lot of his time flouncing around at distance! 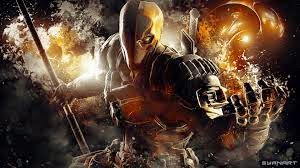 I think that there is a nice balance to this crew. The Joker is still the ultimate threat with the 1:6 chance to kill the best model in the opponent's crew, using the One Shot Gun. I do love that weapon.

Deathstroke is my new purchase and he really does look like he can do serious damage and much of it is Blood. He has ranged and close combat abilities and a lot of attack dice if desired.

He is agile - Acrobat makes his movement 12cm instead of 10cm and Undercover allows him to set-up unto 20cm away from his own deployment zone. Stealth means that you have to be closer than 20cm to see him at all.  He can be in the face of the enemy incredibly quick.

He is hostile - his weapons all to 2 damage and he can have 5 attack dice. The automatic gun does 1 Stun and 1 Blood with a Rate Of Fire of 3.  The Reinforced Bo strikes 3 times for every 2AC doing 2 Stun and comes with Handy and Reach giving him a 3cm stretch re-rolling failed Hits. The Sword does 2 Blood and is Sharp re-rolling failed damage rolls. He also has Counter Attack so can strike back in the opponents turn. He can do some very serious damage especially to lower level crew members.

He is durable - his starting Endurance is 8 but he also has Soul Armour which allows him to restore 2 wounds once per game. He is also a Martial Artist and so ignores being out numbered. I reckon he will be happy in a crowd of unfriendly cops :-).

Tactically I think the plan should be to push him forward onto the enemy henchmen. Hit them hard and fast and allow support to arrive. He should be able to survive an initial onslaught whist doing a fair amount of damage himself. This should keep enemy henchmen in their own deployment zone and away from Objectives.

After that I have kept with Triston and August. They served me well last time out although I will make sure that Triston is shooting at low level Henchmen in future. Trying to Hit Batman was a waste of time. I like the steady Blood damage that they can both dish out. I am also including Turk and hoping that he will act like Triston, a mobile firebase.

Then I have included some grunts to do all the running around, objective holding etc.

I have added some Clown Paint for Triston and August and with the remaining money bought myself an Ammo clip. Probably for Triston.

I have dropped Sniggering for the present although I find myself in two minds about this, especially as there should be more low level henchmen against me and he might fair better against such targets. I see him as a defensive character. He needs to be static to maximise his shooting abilities and in the darkness of our first games he struggled to apply the long range threat I was hoping for. I think that in order for him to be effective I would need to purchase a flare. This would improve his threat no end.

That is my eight man, 350 rep crew with plenty of firepower. I will need to remember that Turk, Prisoner (tube) and Deathstroke will not be able to alter their counters at the start of their activation. A little more pre-planning and concentration required.

In order to make this playable I will have 3 new models to assemble Deathstroke, Turk and Prisoner (tube). I am looking forward to that challenge.
Posted by Bullcher Feb at 05:01