I thought it was about time I had a look at my opposition this coming Sunday. 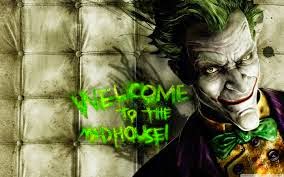 So lets have a look at what they bring to the table. For a start they are both decent characters and have  good basic statistics so it will take a concerted effort to cause any damage, or at least enough damage to take them from the game. 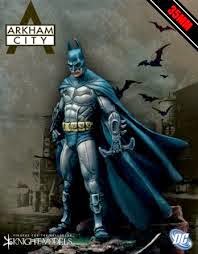 Weaponry
Batman is armed with a Batarang. It has a Range of 40cm and does 2 Stun damage, (no Blood, this means I can attempt to recover some damage at the end of the turn). It has a Rate of Fire of 2 and comes with 3 ammo.

This means that it can be used 3 times during the game unless Batman can pick up more Ammo from an Objective.

Each time the weapon is fired it can do up to 4 Stun because of the ROF of 2. Also the trait Throwing is applied so the ROF is never reduced by moving. This encourages Batman to move around and he becomes hard to pin down.

The weapon is Remote Control so there is no need for Line of Sight. Batman also comes with Total Vision so does not have the standard Range reduced to 30cm due to Darkness.

Batman can also perform a Sneak Attack that can't be Blocked. This is allowed if the target could not see Batman when activated.

This is a nice steady amount of ranged firepower and could be very effective against my low Endurance Henchmen. - Ouch!

Agility
Batman can put 3 dice into Movement. He can exchange his basic Movement to use the Batclaw which allows movement of 30cm but must also have a height element to the move. Dice can still be used to extend movement both before and after the Batclaw move. This is a really cool piece of movement and far better than any of the Joker crew.

The Batman's Batcape also means that he will take no damage from Falling or Jumping. So he is happy to be in the high places that the Batclaw allows him easy access to.

Defence
Batman has a high Endurance of 8. It is going to take a lot to put him down. Bat Armour and Counter Attack are Batman's two defence options. The Armour gives a 5+ save and Counter Attack allows Batman to strike back at the opponent if he is forced to Block during his turn. 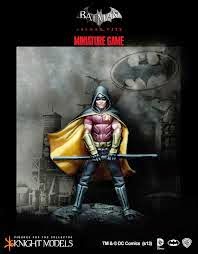 Weaponry
There is no ranged abilities to consider although Robin does have the use of 2 Short Range (up to 20cm's) grenades that can Blind opponents for a turn and do 1 Stun damage. Mechanical also means that it damages on a 3+ (I think). They have a template effect so will be good against groups. These could be nasty but he will have to be close to use them.

His other weapon is a Bo(a staff) that does 1 Stun damage. It has Reach (3cm's) and is Handy (reroll failed to Hit). Robin can put 3 dice in Attack.

Agility
Robin can put 2 die in Movement and like Batman Robin has the Batclaw but none of the other benefits so if falls or is Pushed off a building he will be in trouble.

Summary
So should I be worried? Well the game should be a challenge as both sides are adopting a very different approach. My Joker Crew have the numbers but are slower and many come with low endurance so are vulnerable to sustained damage dealing. Batman's high level ranged attacks could be hard to handle.

Batman looks like he will also be a hard nut to crack but if I can get him on the ground and out numbered the task may become more manageable.

Robin is impacted by Darkness and will have to get close to do damage. His Endurance of 6 is not a mountain to climb but I will have to be careful not to present a nice target for those Grenades.