Well we are in the final week of build up. The big game is on Sunday and so I figured that I should make some decisions and then apply some more detail, paint wise, to the chosen crew.

I have been attempting to max out on both the 200 rep and the $1000 dollars. As I began to pull the various rules together and compared this to their weaponry, proposed role for each character and overall Willpower, I had a rethink.

I am beginning to think that this game is going to be about controlling space or at the very least applying threat to space. Sure it will be important to have bodies on the ground but they will be 'easy meat' unless they can be supported, preferably from distance.

The Joker and Sniggering will be excellent at applying this threat. Mr J has Total Vision allowing him  to effectively ignore the dark and even see around corners. This compliments his Explosive Teeth as they are Remote Controlled. Once an opposing model is within 20cm - the One Shot Gun becomes a potential killer. Sniggering offers similar threat in that he has full range over the entire board. His devastating 3-9 Blood damage can also be an outright killer. This will allow him to support other models from distance provided there is light and Line of Sight. The preference will be for him to get a good vantage point and stand still, maybe even sitting on an objective.

The Clowns (tube & knife) are still worthwhile and will be able work with Mr J and / or fan out up the board. If they stay with Mr J they will benefit from Inspire and they have Demential Laughter to Distract. This is a nice combination. There is also the potential opportunity to Outnumber. Lets face it they are cheap and are present in the Crew to provide numbers.

August is also a strong choice. His 2 Blood damage from the Axe is strong. And his Run ability saves a Movement Counter so that it can be for Movement purposes. He is good value for his cost of 25 rep and can operate with a clear purpose in the game.

I have reviewed Contra-August and I have figured that his Obsessive trait could be a big problem. Basically once he gets into hand to hand combat he has to stay with his target. I could want him to be doing something else - like holding an Objective. This is a big potential downside. Also his Baseball Bat is only a 1 Stun weapon. In play testing he has not done much in a fight.

So I have thought it through and I think that Triston will be a better choice. His weapon is ranged and does 2 Blood. He can move and fire so is agile. He can offer real support / threat and can move around to take Objectives if needed. He costs $300 so I will lose the Drugs and Clown Paint that I had been planning on. I will also have to drop the Prisoner Tube who was costing 10 rep.

I am not spending every single rep point or even every single dollar but I think that the result is more stable and predictable. 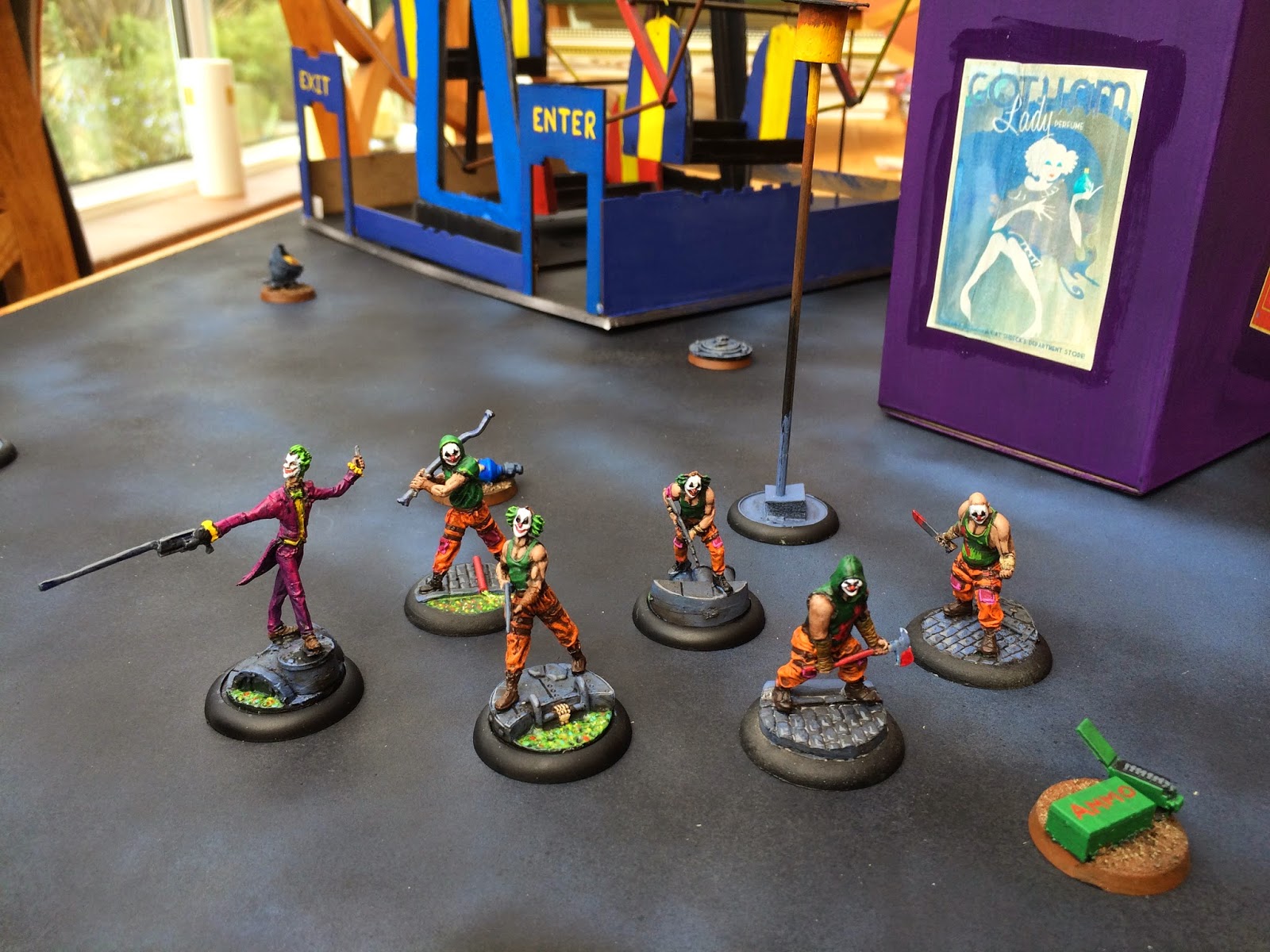 Excitement levels increasing be the day - bring on that 'Batman'!
Posted by Bullcher Feb at 04:51