I have been working away, building my Joker crew, and so far it has really been enjoyable.

We are looking to get our first few games started in April and as such my thoughts have been straying back to crew lists. My first thoughts were largely based on the models in my possession at the time. Things have moved on.

We are intending to start with a couple of 200 rep games so therefore my first Joker crew will need to be constructed accordingly. This limit will also place a $500 maximum spend on crew assembly. So how do I build a Crew that can take down The Batman? 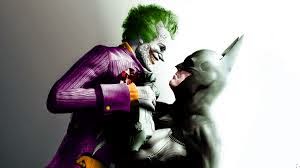 I have been contemplating lists that range from higher numbers of low cost models v's lower numbers of expensive characters.

First things first - I have to take a leader and for me, this will be The Joker. He costs 90 points. I feel it will be important to understand the implications of fielding him and then play complimentary models to maximise effectiveness. This lesson was forged when playing Warhammer 40k, my Dark Angels. I played Belial as my leader and it was an effort to really understand how to build an army around him. However once achieved .... well it was worthwhile.

So - what do I know about the Joker? 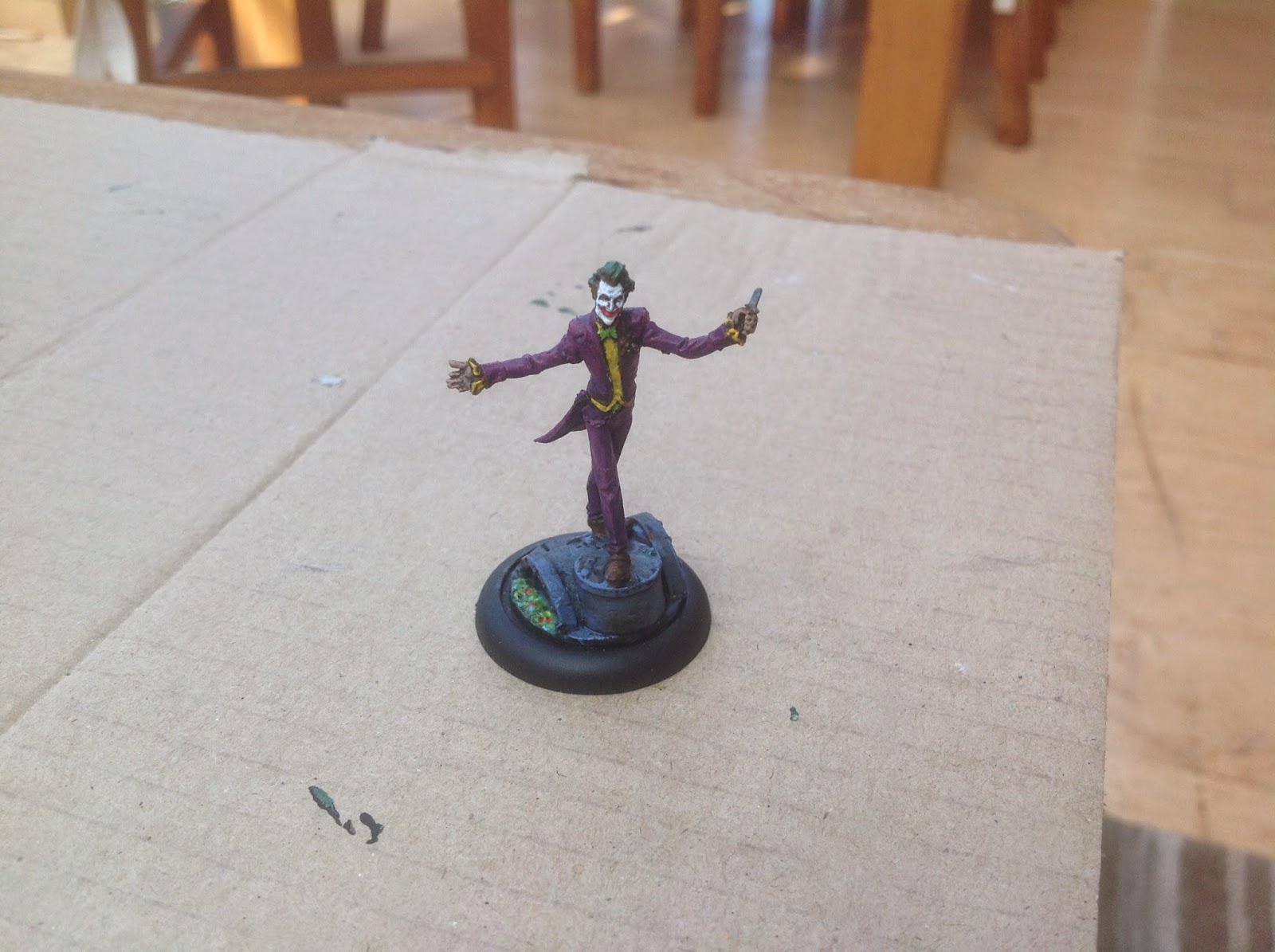 First off, he has Special Traits that benefit Henchmen, not Sidekicks and Free Agents.

He confers Trickster onto all Henchmen and as such they can reorder their Action Counters when they activate. This is a unique ability and should be great as I learn the game. It will bring a lot of flexibility and help me get out of early errors.

He also Inspires Henchmen within 10cm so that they get an extra Action Counter and can take the total Action Counters above the normal maximum.

The Joker also reduces the game length by one turn, so a six turn game becomes 5. It will be important to gather VP's early before the clock ticks away.

Decision 1 - Max out on Trickster and Inspire so leave the Sidekicks & Free Agents at home for the smaller games - Total 90 rep spent. 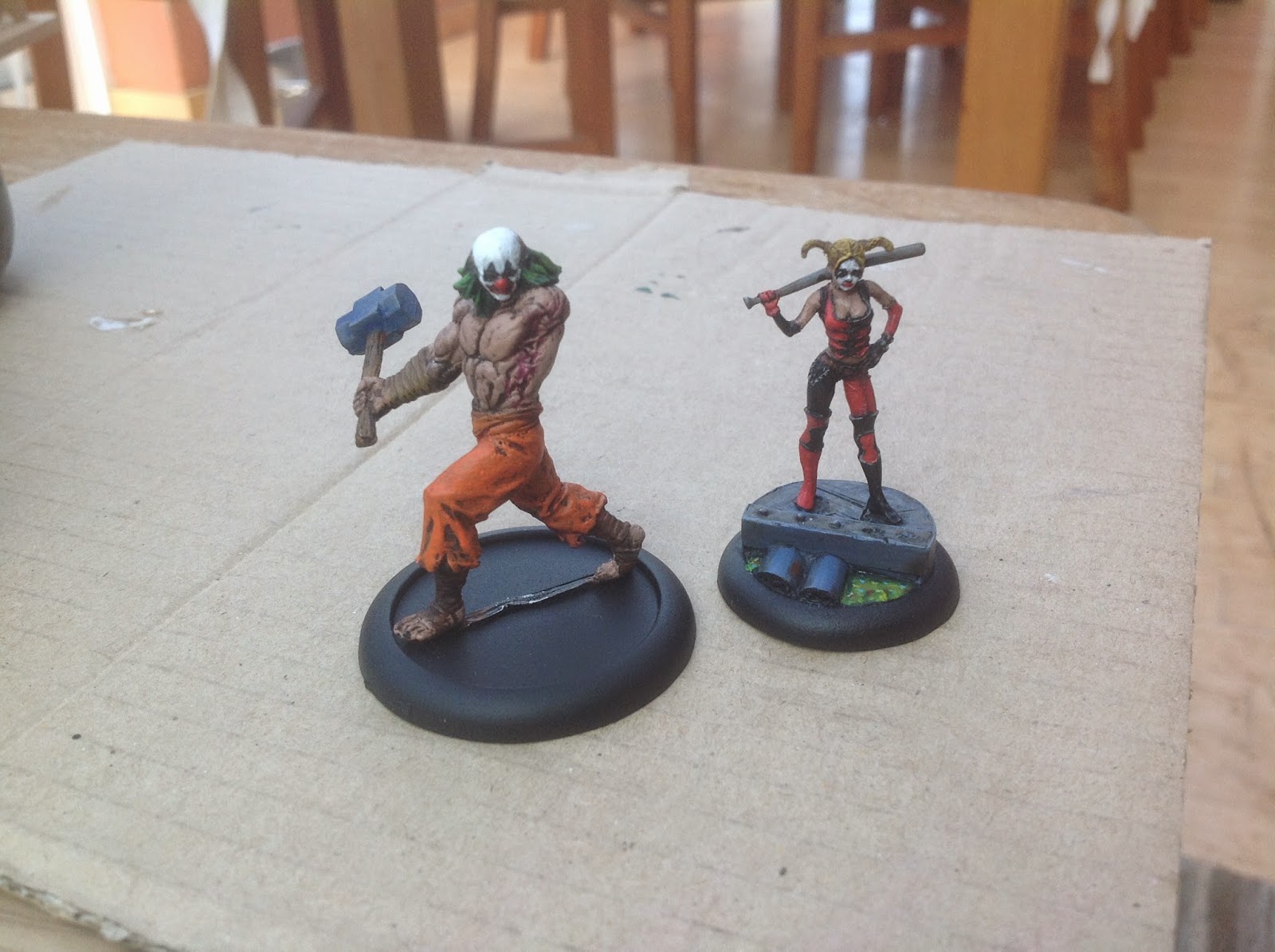 Overall the Joker appears to be fairly slow but comes with decent ranged attacks. He has an awesome 'one shot' gun that really does look like it can do damage and also has medium range exploding teeth (of all things). These are template weapons with a 10cm diameter. This ranged ability is complemented by Night Vision which allows the Joker to see in the dark and is not reliant on the 2xD3 Lampposts which give a 10cm disk of light. He will provide long range threat, provided he has Line of Sight. He will need a little help to spread the threat to other areas of the board.

The only real ranged help available to the Joker Crew in a 200 rep crew is Triston. He costs 26 rep and £300.  He comes with a medium range Shotgun that does 2 Blood damage. I think that this will compliment the Joker nicely and also put some real threat into the well lit areas of the board.

I have $200 left to spend and an extra ammo clip might just be the thing for that expenditure. 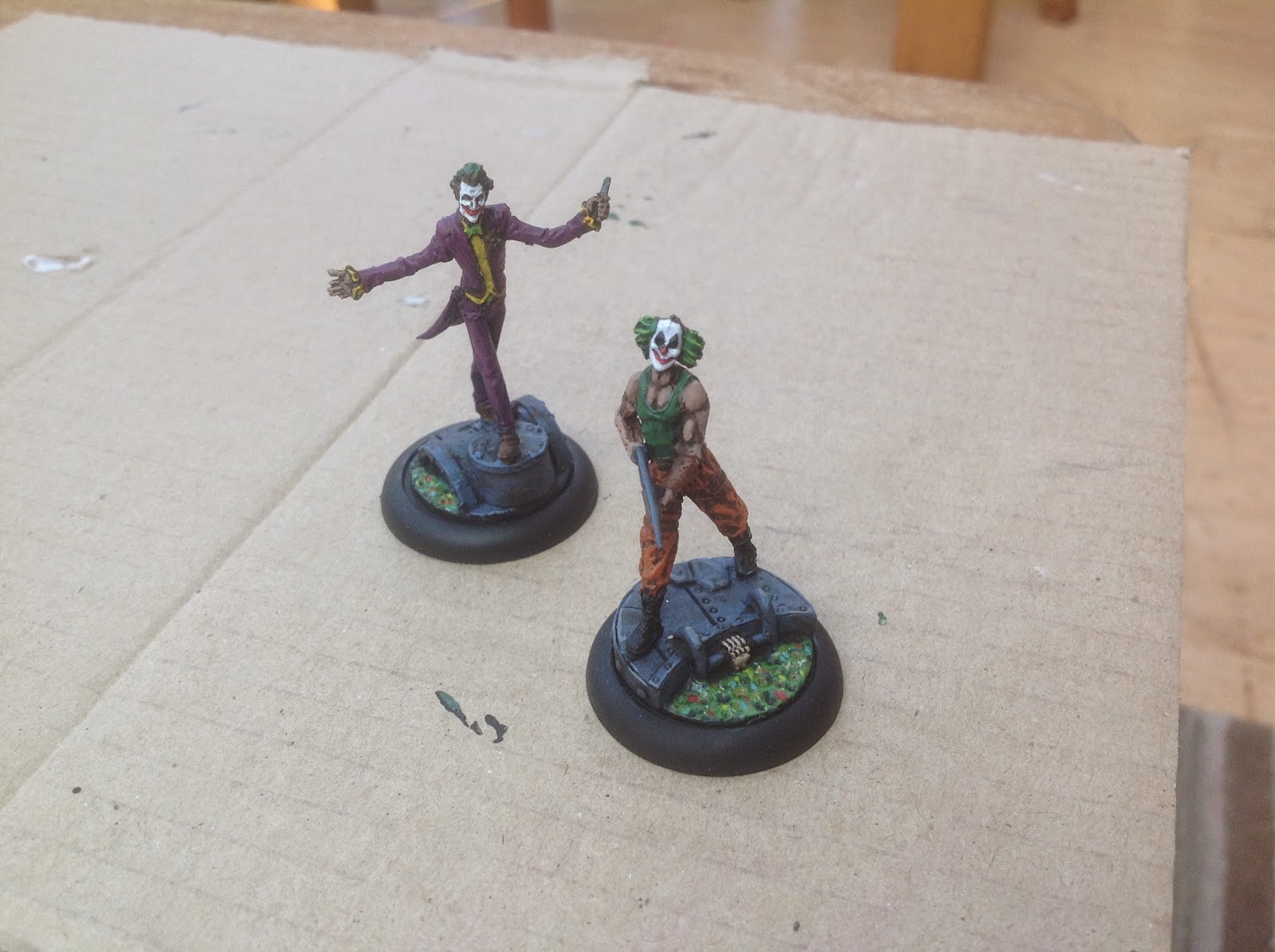 The Joker's 'hand to hand' abilities are less impressive and so he will need some muscle to help him when things inevitably come together. Although he does come with Luck forcing the opponent to reroll all successful Hits. (I like it) Bunching up will also help to spread the Inspire effect to Henchmen within 10cm.

This is where the thinking cap has to come out. Do I go for cheap clowns with a view to scuttling around the board gathering objectives or do I go for more punch?

This squeezes every last point out of those available and gets a six man crew on the table top. Maybe the thinking here could be that Contra-Auguste stays close to The Joker and the others scatter up the board. A potential issue with this tactic is that he has Mental Disorder - Obsessive meaning that once he strikes an opponent he goes after him until he is taken out! Not very flexible, if very scary :-) 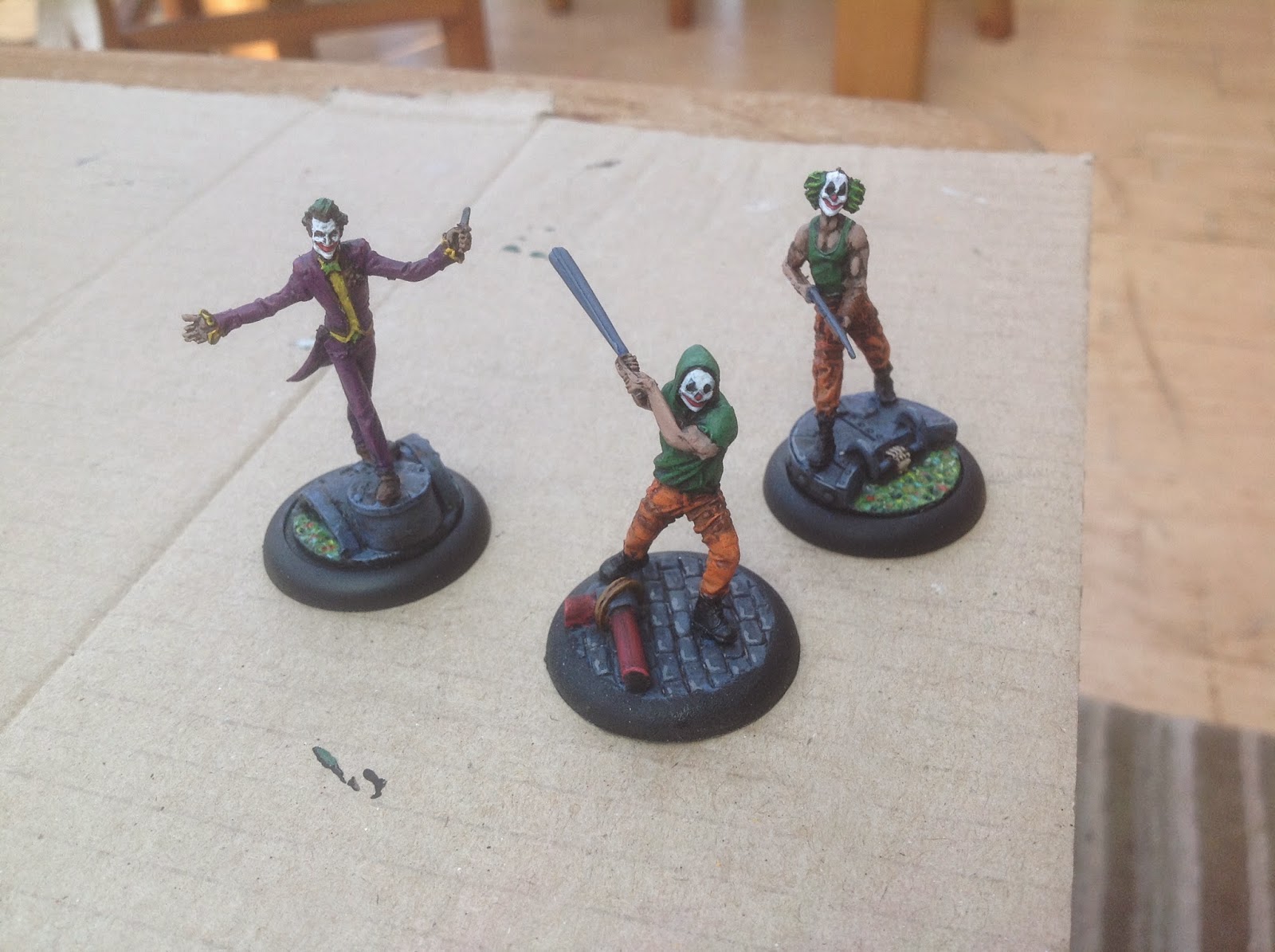 The Ringmaster has a 360 degree weapon which would be good in a crowd, but will I really need that against a Batman crew? Also it can damage friendly models so I would not want him close to the Joker in a defensive capacity. Much better attacking on his own maybe with Triston in support.

Another option is that I could take another couple of Clowns in lieu of the Ringmaster? 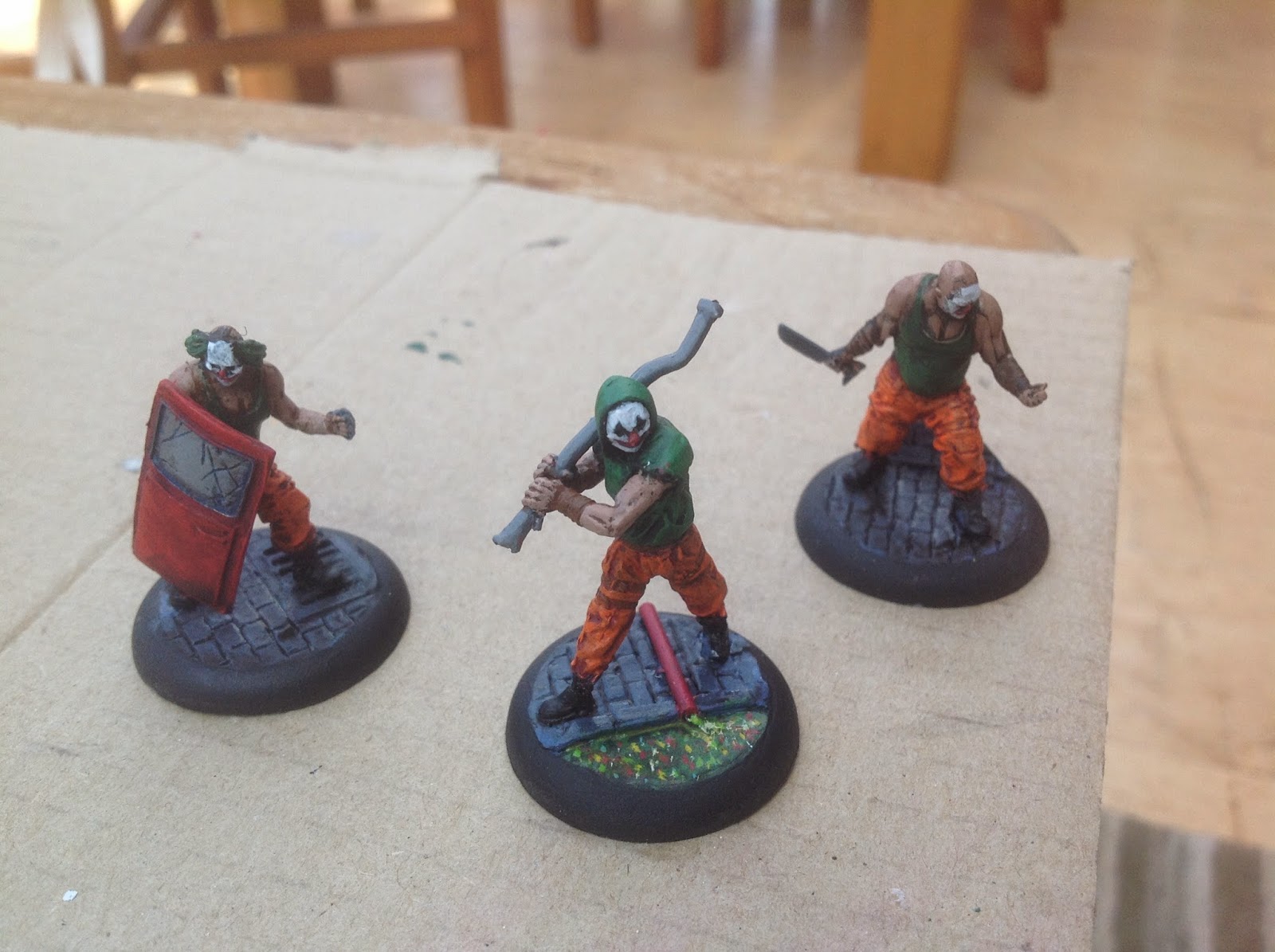 The cheap prisoners are also looking pretty good with this mindset - but I don't have the models for them yet and I have just spotted Turk with 2 pistols as well. Nice. 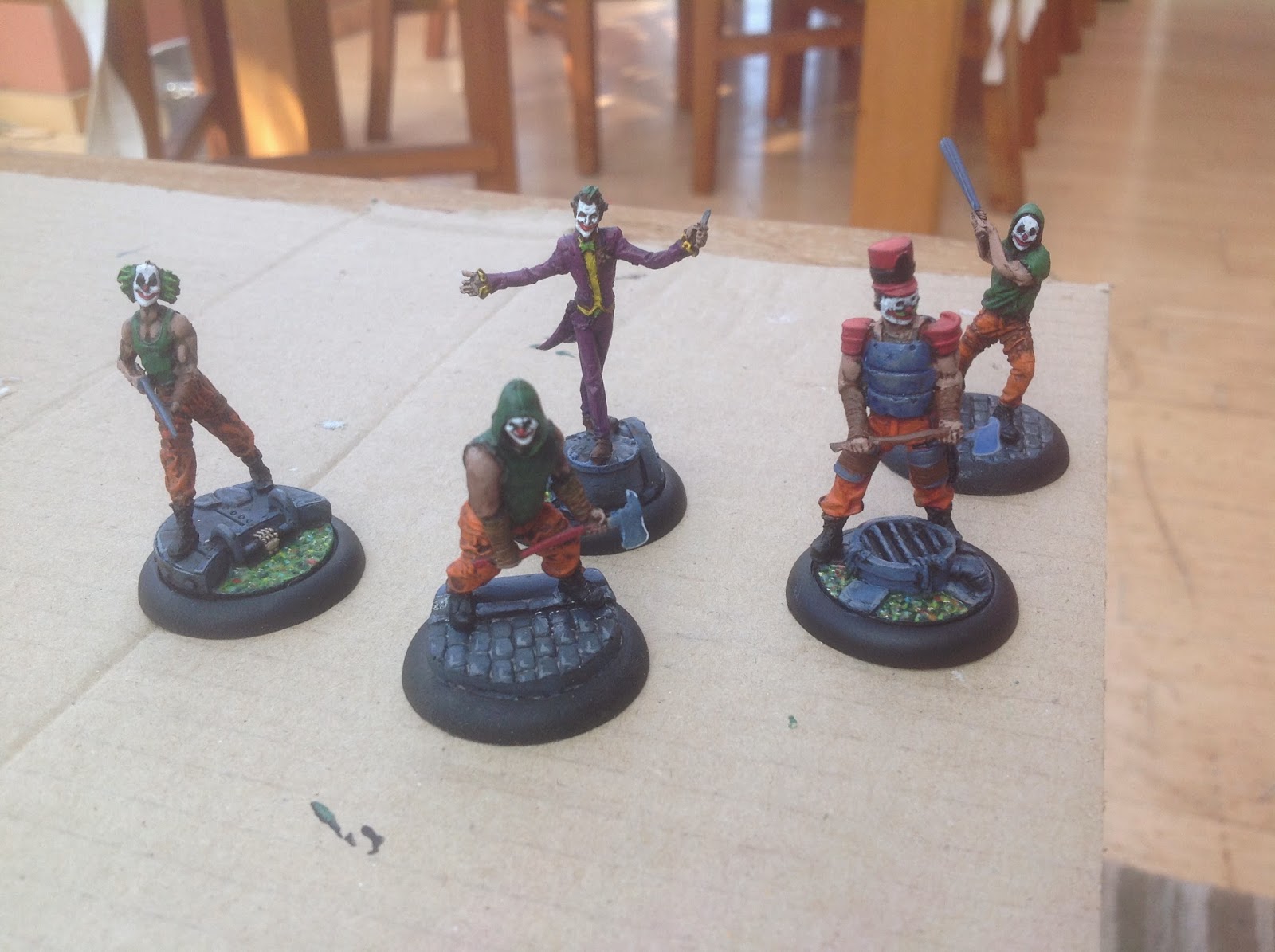 This is more compact and comes with a couple of Axes for punch. They are 2 Blood damage weapons and when combined with Handy (reroll failed to Hit dice) then they look impressive.

Replacing The Master of Ceremonies with Asker at 38 rep would max out the 200 rep limit and add a short range hand gun / meat knife with 1 blood. He has a rather nice Distract ability (reduces an enemy Defense by 1 within 10cm. He is Fast so could be used to grab objectives and then support others later in the fight. He is also Bloodthirsty so gains an action if damaged.

Yes indeed - a lot to think about and I would welcome any thoughts.