What an Epic day

Well now, the plague arrived and was well met by the Dark Angels but sadly the day was not ours....

I fielded an unusual army.....

- Belial with 5 terminators in the crusader, a couple of lightening claws and the Deathwing banner
- Interrogator Chaplain with 5 man command squad including 2 power axes in a Razorback with lascannons
- Vindicator
- Venerable Dreadnought with autocannon
- Two Landspeeders, one with heavy bolter and assault cannon and one with multi melts
- Tactical squad of 5 with a meltagun

The idea was that the Nurgle horde were making a surgical strike to take out the Dark Angel leadership at the start of the campaign. 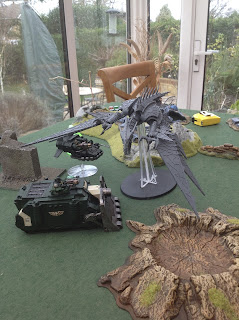 A flyer, I could only hit it by rolling a six!! It proved itself - well and truly.

The game started on the right hand side with me throwing Belial and terminators down the throat of 30 Zombies and 2 Obliterators. They were supposed to be supported by the Chaplain but the Razorback got immobilised crossing terrain. It was heroic indeed. The Crusader did lots of damage and the Terminators assaulted. But the armour saves just kept on coming and there were sooooo many zombies. They just clawed there way through slowly.... turn by turn ..... 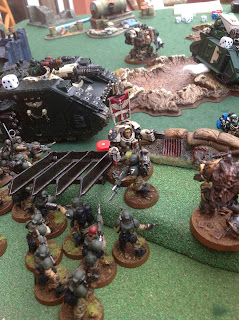 Things were getting very interesting by the close of turn 2 and then the Darktemplar teleported Typhus. He rolled 2 dice, double 5 so 10 inch scatter unless he could roll a hit and ..... he did. Typhus arrived in exactly the right spot! I poured on the firepower and then I sent the Chaplain in to greet him. 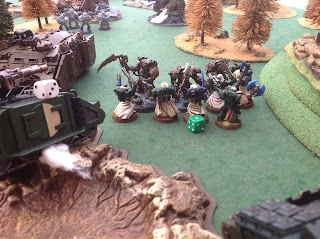 Typhus was imperious!! Although a certain power axed individual clung on to take a couple of wounds from him. 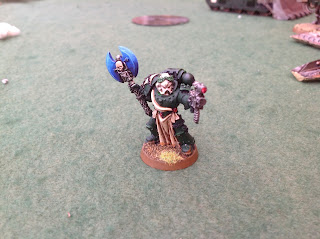 In the middle I harried the plague marines with the Landspeeders and vindicator but could not really push home any real damage. My Venerable Dread become immobilised just as it was about to join the fray. So many 'what ifs' in this game.

In truth the Dark Templar got it exactly right. He sucked me in with the zombies. I should have left them alone but the obliterators had me worried. What a star Typhus proved to be and he got stronger as the game went on.

Overall the game was true joy. I thing of beauty. It ebbed and flowed, which is all you ask. It had surprises and was tactically really interesting.

Congratulations to the Dark Templar on a very well judged game!! Well done sir. Until the next time. I just know that under that pile of Zombie bodies Beldial still clings to life and can be returned to duty.....
Posted by Bullcher Feb at 09:52