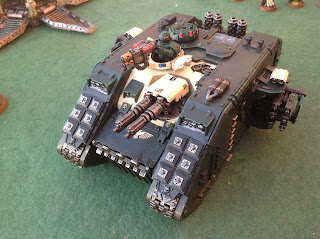 It has an armour value of 14 all the way round. I have not been able to discover its hull points but it must be at least 3 which is the example given for a Leman Russ on page 70 of the rulebook. If anyone can shine a light on this, I would appreciate it?

The assault cannon is a Strength 6, heavy 4, rending weapon. That is 4 dice, re-rolling to hit, needing 3's. Rending means that when rolling to wound, any 6's are automatically causing a wound. Ouch!!

And we also have the multi-melta. It is a single shot at 24" range which is decent bearing in mind this vehicle is all about getting up close and personal. Strength 8, AP 1, Heavy 1, Melta. Melta means that an additional D6 is rolled when penetrating vehicles.

That is 10 twin-linked shots needing 3's. 66% success rate so 6.6 on average and then a further 2.24 on the re-roll making that an 8.84 likelihood to hit, plus the multi-melta. That is going to make a big hole is most squads.

The machine spirit allows the vehicle to fire one weapon at BS 2 even if the crew are shaken or stunned.

It is an 'assault vehicle' which means that models disembarking can also launch an assault in that turn.

Its points cost is 250pts and I think worth considering if playing a large points game. What does this mean for me? Well it means that I am easily distracted by large shiny objects. Getting into character is one thing but I should really be settling on an army list for Sundays big game and concentrate on painting the models I will need!

It has been fun to paint though and I needed lots of bits from the bits box. I do like a good rummage. The assault cannon is my own conversion and the multi melta is also from the bits box. Project Deathwing is well underway.
Posted by Bullcher Feb at 00:06