Thanks for the comments. So now I am thinking about the specific role for each of my units. A few years back I took a Dark Angel army to a one day tournament 'Conflict London'.  There were 131 players in the 40k section. There were 3 games in the day. Myself and a guy called Andrew Isherwood (with a Tyranid army) scored maximum points for Generalship. We each had 3 massacres and on that day the Dark Angels were really on form.

My tactics for day were honed over several months (I took a lot of beatings and learned lessons galore) and were fairly basic. Play to your strengths. I ruled the centre of the board with a devastator squad. It was a static firebase. Its purpose clear and super effective. 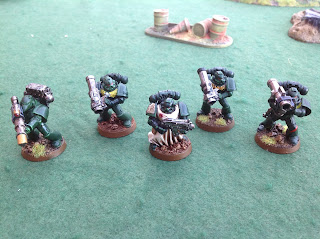 I think I would plump for Missile launchers with a single Lascannon. This gives me options frag v krak.  Good range at 48".  Its expensive at 185 pts. Also I am thinking that a five man squad would not have a lot of staying power. An extra 5 models costs another 75 points but at least when the first hail of bullets arrives I would not be losing the heavy weapons.

I have just compared this to the Predator (with twin linked lascannon, pintle-mounted storm bolter and 2 heavy bolters)  at 135 points. 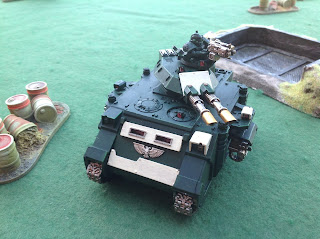 Maybe those Devastators would be worth the points after all.
Posted by Bullcher Feb at 01:40