Having pretty much decided to get into some painting I want to get models painted that will allow me to play a game without using the unpainted models, well in the main anyway. For this to work I figure that I need the following: -

In order to take the principal to Toxic City Mall I will also need: -

There are more models than that but this should be enough to get started.

There is a lot to be getting on with.

In terms of Survivors with their Zombivors I have Elsa and Chef Ramsay. I have decided that Phil and Wanda will be next to the party. I need to finish off painting the Survivor models for these and start their Zombivors.

So how will they play? Lets look at the Zombivor rules for them. 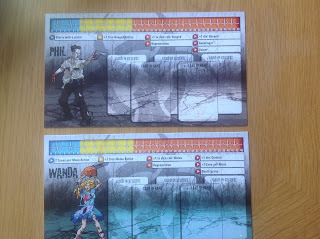 I like Phil. He starts with a gun and as such finds himself in the thick of the action from the first turn. Usually going second or third to allow a door to be opened and targets to present themselves.

As a Zombivor he maintains his Ranged shooting emphasis. This is very 'in character' and I like it. At Yellow level he gets +1 free Renged Action.

At Orange level he gets +1 to dice roll: Ranged. The alternative is that he can take Regeneration. At the end of the games round Phil discard any Wounds received, unless he is killed.

At Red level he gets +1 die: Ranged which is nice but there is also the choice of Sniper where he can choose his target. Great for dealing with those difficult Runners. The other option is Gunslinger which means he treats all Ranged weapons as if they have the Dual symbol. He can shoot two Ranged weapons at the same time. Yippee Kay Ah, Mother F***er!! lol. Now that is some serious firepower.

The Wanda Zombivor has some big changes to be aware of and this will surely change her roll. The Wanda Survivor is all about speed and slipping by zombies, often in the nick of time to win the game. The Zombivor loses the Slippery ability and instead is turned into a Combat monster. The group will need Zombivor Elsa to slide by zombies now.

At Orange level gain +1 to dice roll Melee or Regeneration. (same as for Phil above)

At Red level gain +1 die: Combat. The alternatives here are +1 Zone per Move (3 zones per move) of Death Grasp. Combat is most likely to be the direction of travel here.

My Survivor Group
So far I have chosen: -

Chef Ramsay for his Born Leader ability and Combat skills late in the game.
Elsa, the cat burglar, to open doors and slide by Zombies as a Zombivor with Rotten to win games.
Phil, the policeman, as he starts with a gun and develops good ranged abilities later on.
Wanda, the roller waitress,  for her speed at the beginning of the game and combat skills late on.

I have two more to choose and a lot to think about to give a good balance to the group.

Neema is an option for Tanking abilities, Raoul as a potential Healer, Derek is a Ranged weapons man (although I already have Phil), Ned with his free Search skill, Josh, Doug or Amy. I have more reading up to do before the final decision is in.

Now lets break out those Toxic Zombies and sort our a colour scheme :-)