I had a look at the rules for playing the VIP's and at first I just didn't get it. There were loads of cards in the box in lots of different languages and it was a bit beyond me to figure out, or was that red wine? Who is to know.

Anyway I had a second read last evening (minus the red wine) and it all became clear. First off I split out the English cards. We were down to a manageable pile. These cards spawn VIP models. They are to be mixed into the normal spawning deck. 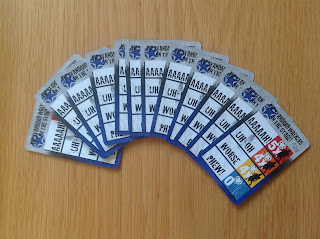 Random VIP models spawn. The idea is to kill different model types. As the models are killed the Survivor retains the model instead of returning it to the zombie discard pile. Five models, one of each type, can be exchanged for a top level weapon. There are 5 different types of VIP and 4 of each type making 20 in total. You just know they are all going to 'need' painting. I like the idea. Its like big game hunting.

There are 3 new weapons available. 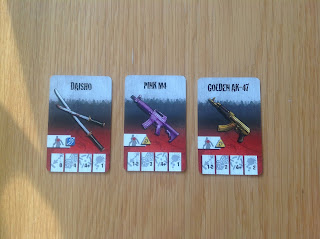 These are combined with the top level weapons from the various rules sets to form a 'pimpmobile deck'. For example the original game has Ma's Shotgun and the Evil Twins. The Survivor may choose a weapon from this deck when handing in 5 VIP models.

Overall I think this is a rather cool addition to the game and I look forward to giving it a try.