In Zombicide Runners can properly mess you up. They move faster than Walkers and Fatties and can't be targeted if they are with other zombies, unless you have special equipment and/or skills. When the game is drawing to a close and it all hangs in the balance you need to be very aware of where each Runner is and factor them into your tactics. The dreaded 'All Runners get an extra move' has been the end of many a close game!

An issue for me is that they do not stand out from the other zombies. Well Fatties obviously do stand out but the Runners can just blend in with the mob. If you miss one, tucked away in a building or something, it can be a real problem.

I have been contemplating how to make them stand out. I had been working on a group of Runners for about a week now and then it struck me. 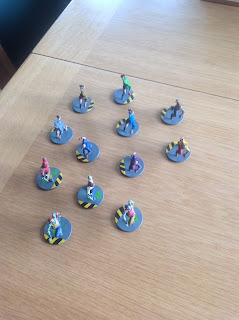 I could add a small yellow and black hazard strip to their bases. This could be used both with the normal Runners and the Toxic Runners, who also have their toxic green puddles. I changed the angles that the strip was applied so that it would have of an 'ad hoc' feeling. It is a very simple solution but definitely helps to draw the eye and will hopefully make them easier to identify 'in play'.

Happy hunting all you Survivors!
Posted by Bullcher Feb at 02:48