Is he back? Will he find his way into the new Ork armies? Lets take a look at him.

He comes with Waaagh! Once per game announce the Waaagh and the entire army can Run and Charge in the same turn. A must have in the Ork army and there are limited ways to get it.

Then comes the gear options and they are wide ranging! He can take items from Ranged Weapons, Melee Weapons, Runts & Squigs, Orky Know-wots and Gifts of Gork and Mork. He can also take Mega Armour for 40 points!

So the issue is - do you keep him cheap and cheerful to get Waaagh or do you invest some points in a potential monster? 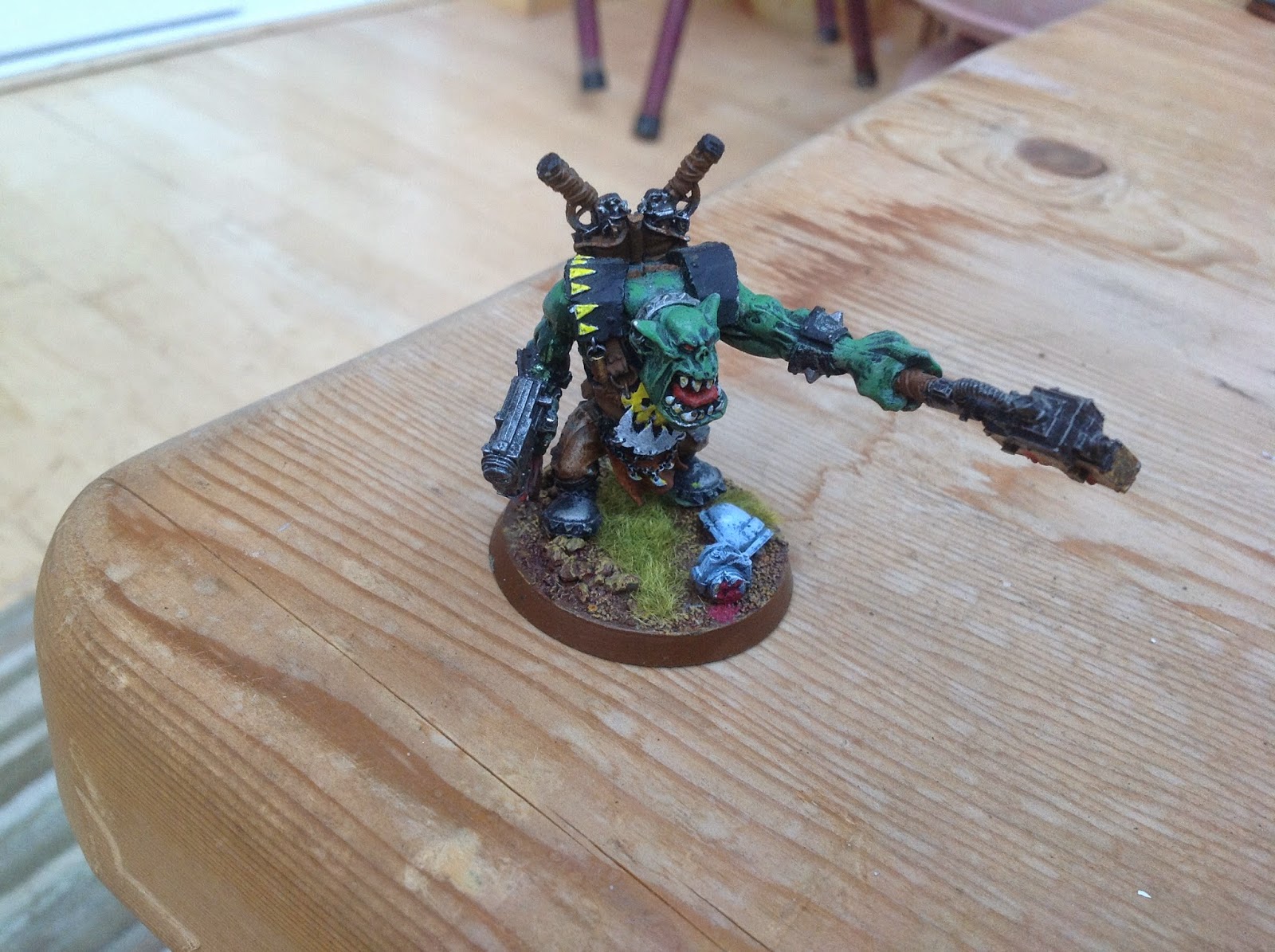 I used to play this guy and had him as cheap as I could and armed with a choppa and slugga so he fought in Initiative order. I surrounded him with a Nob squad and together they could dish out some punishment.

I have been reading the rules and where there are multiple Toughnesses in the unit rolls are resolved using the majority 'T' value however this is not the case when it comes to making saves. So the 2+ save will apply for the mega armour making him very hard to kill.

Obviously you get the Power Klaw so hitting last in challenges.

The down side with Mega Armour is that it is Slow and Purposeful so no running for the entire unit. I guess they could go in a transport but .... lets see.

Lets look at the Gifts of Gork and Mork: -

25 pts - Da Lucky Stikk - all models in the unit gains +1WS. If the Warboss is in a large unit then this really is value for money. The Warboss can also choose to re-roll failed To Hit or To Wound or Saves (but if he fails 3 in one turn he is removed from play) Imagine being in Mega Armour with this rule. Very hard to kill.

20 pts - Headwopps's Killchoppa - S+2, AP5, Melee, Decapitating Strike, Rending, Two-handed. Decapitaing Death means any To Wound roll of a 6 is Instant Death. A bit risky I feel and not worth the points.

5 pts - Da Dead Shiny Shoota - R18", S4, AP6, Assault 6, Stray Shot, Twin-linked. Yes sir - that is Twinlinked, Assault 6. Sounds great but remember that the Warboss is BS2 and the weapon is AP6 so  everyone will be getting their full saves. It is cheap though.

The stand out candidate for me is Da Lucky Stikk. The Warboss gets re-rolls and the unit gets +1WS.

5 pts - Boss Pole (BP) - every Nobs friend as you get to re-roll on the Mob Rule table. A must have!

I am confused after that because there are other items on the Orky Know-wots lists but no points value for them on page 53. Emmm.

After this there are all kinds of choices for weapons. Do we want him hitting in Initiative order? If so the single handed and assault weapons can be favoured. I am liking the idea of a S10, Power Klaw myself perhaps with some kinda kombi weapon. 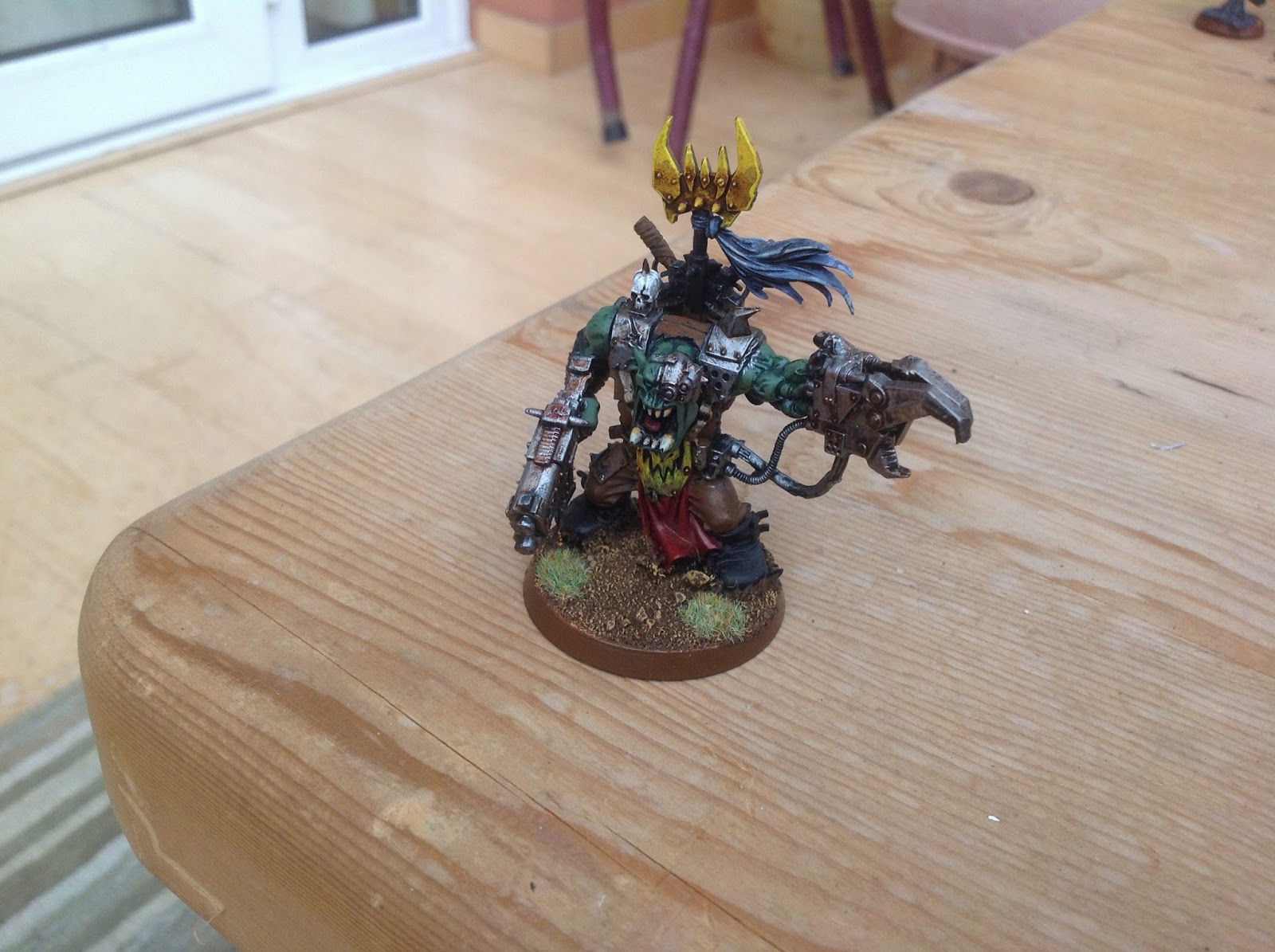 There are some decisions to be made and maybe even take two Warbosses to double the Waaaghs. There could be a full Mega Armour monster and then a cheap as chips guy. Two Waaaghs could be devastating in a battle.