The new Codex has landed and I think that it is safe to say "My Head Hurtz!"

For starters I want to move in the direction that is being encouraged and therefore see what the Orks can play like. It seems to me that the major changes are the creation of the Ork Warband and the alternative Ork Detachment. Assembling an army in this way is referred to as creating a Battle-forged army. This grants the entire army certain Command Benefits which will not be available if the army is assembled outside this structure (Unbound armies) 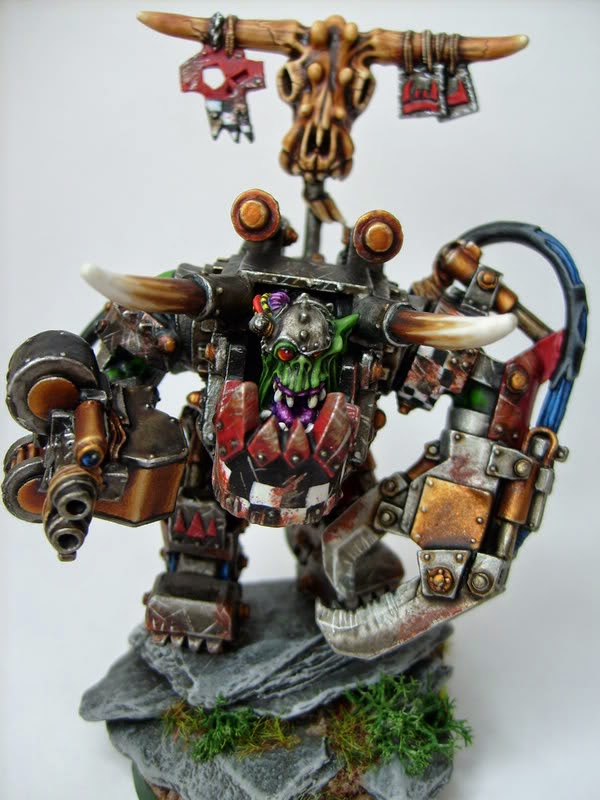 The Ork Warband is aimed at creating a regular flood of Ork boyz. It contains: -

For this you gain three Command Benefits: -

Boss of the Waaagh - re roll your Warboss Trait
Greenskin Hordes - Gain Hammer of Wrath for units of 10 or more (low S hits if roll 10" or more for charge) (S of the model, AP-)
Stampede - Grants Waaagh every turn except the first (run and charge)

I think that this suits playing a high points value game. I'm not sure that Greenskin Hordes is much good. The chances of it occurring is very low and though the 'Ere we go rule does allow one dice to be rerolled for the charge and this improves the odds but only slightly.

Stampede is the big deal here. It really increases mobility and should help to get the boyz into the fight and then to stay there. They can flood across the board in vehicles or just foot slog, running and charging and re-rolling charge dice.

However - the are no Elites, Fast Attack or Heavy Support slots. This seems a real waste and I'm not sure that Stampede makes up for that. Taking a second Warboss would give another Waaagh.

The Ork Detachment appears to be aimed at something even larger. It contains: -

The Lord of War could be a Stompa or Ghazghkull Thraka himself and the Fortifications would be ideal to help some shooty units at the back like Lootas or Flashgitz and may even provide some anti air support. (Quad gun or the like)

The Detachment has much greater flexibility of choice which is great but alas gain only two command benefits: - Boss of the Waaagh & Greenskin Hordes. No Stampede.

The compulsory element is 1 HQ and 3 troops - a very easy starting point for orks so I suppose it makes sense to use the Detachment set-up.

I am not convinced that there are enough benefits to encourage anyone to use the Battle-forged army assembling method. The Unbound Armies just have so much more flexibility to offer.