In the middle of April our mini league will be joined by a third player Mr Michael Awdrey. He will be a welcome addition indeed. I believe that he intends to try out a team of Lizardmen. I have done a little reading and look like a fairly decent choice. There are Skinks, very agile, fast, dodging types with AV7. Then there are Saurus, strong ST4 & tough but no starting skills like Block (that could be interesting) and then a Kroxigor who looks to be be a real power house but with the Bone Head downside. On a roll of a D6 - 1 = stands around doing nothing. I think this is a good team choice for a new player. There is a good strong spine to the team and then you have the speedy Skinks. No need to worry about Throwing & Catching just yet. The KISS principle will apply - Keep It Simple Stupid. Knock things down let the Stunty Skinks pick up the pieces.

As a result myself and the Dark Templar also intend to start a new team. This will mean that the teams are starting out at similar levels so it should even things up a bit.

Nurgle is the team that the Dark Templar is going for. They look like a very 'different' type of team with a good mix of possibilities. Disturbing Presence is a concern as it reduces D6 rolling for Throws, Catches and Intercepts by 1 and you only have to be within 3 squares for it to apply. Where as Foul Appearance means you have to roll 2+ in order to throw a block. They have a Beast of Nurgle, an unpredictable monster but slow with MA4. They also have strength 4, AV9, Nurgle Warriors but they are also slow at MA4. They are also high cost at 110,000 each. Well rounded Pestigors with MA6. Then finally Rottors who are similar to the Pestigors but do not have Regeneration. 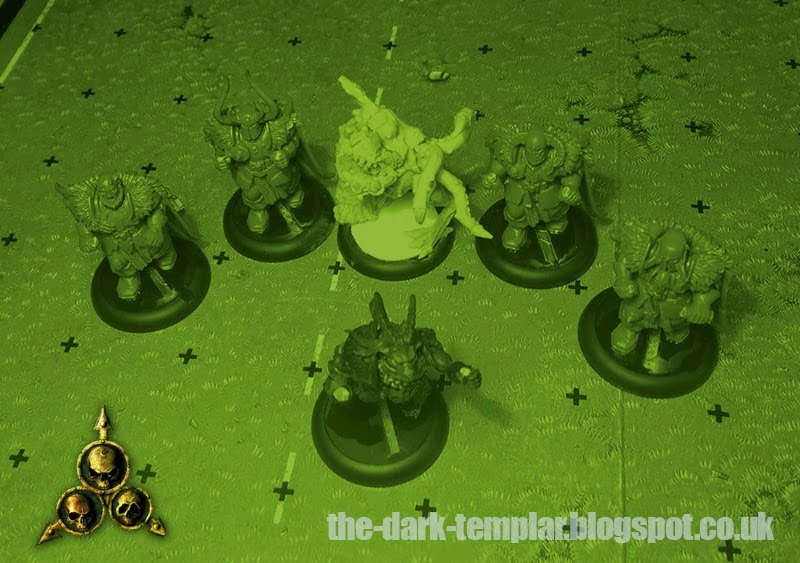 These two teams are quite hard hitting and I think the Skinks will be amazing. I loved playing the Stunty Goblin in my Orc team. He was a star so I think that they will cause a bit of chaos.

I have a choice of 3 teams, where I already own models. 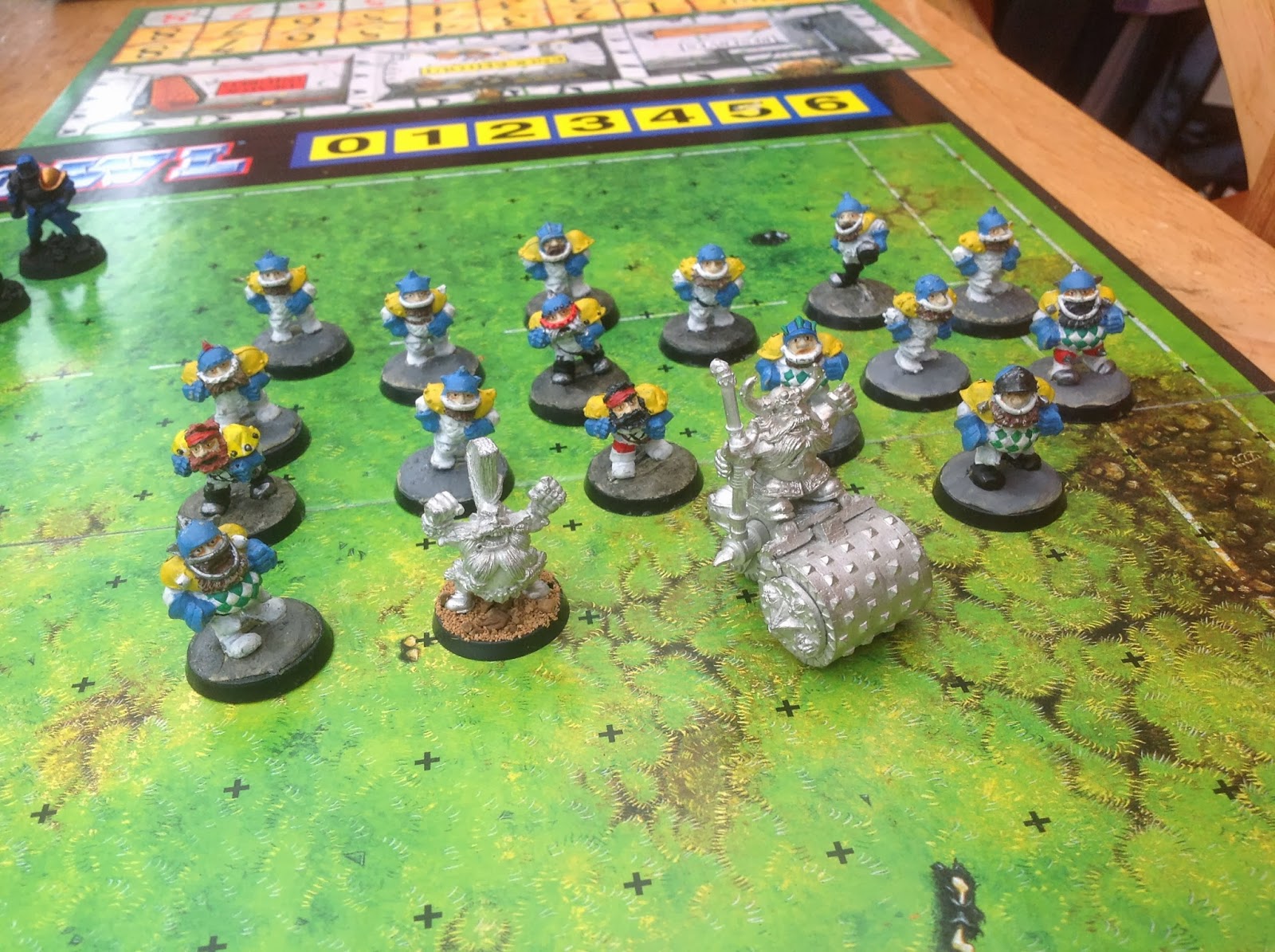 Option 2 - Elves - Very tempted - AG4 - improves all dodging, passing, catching and there are some good starting skills too. 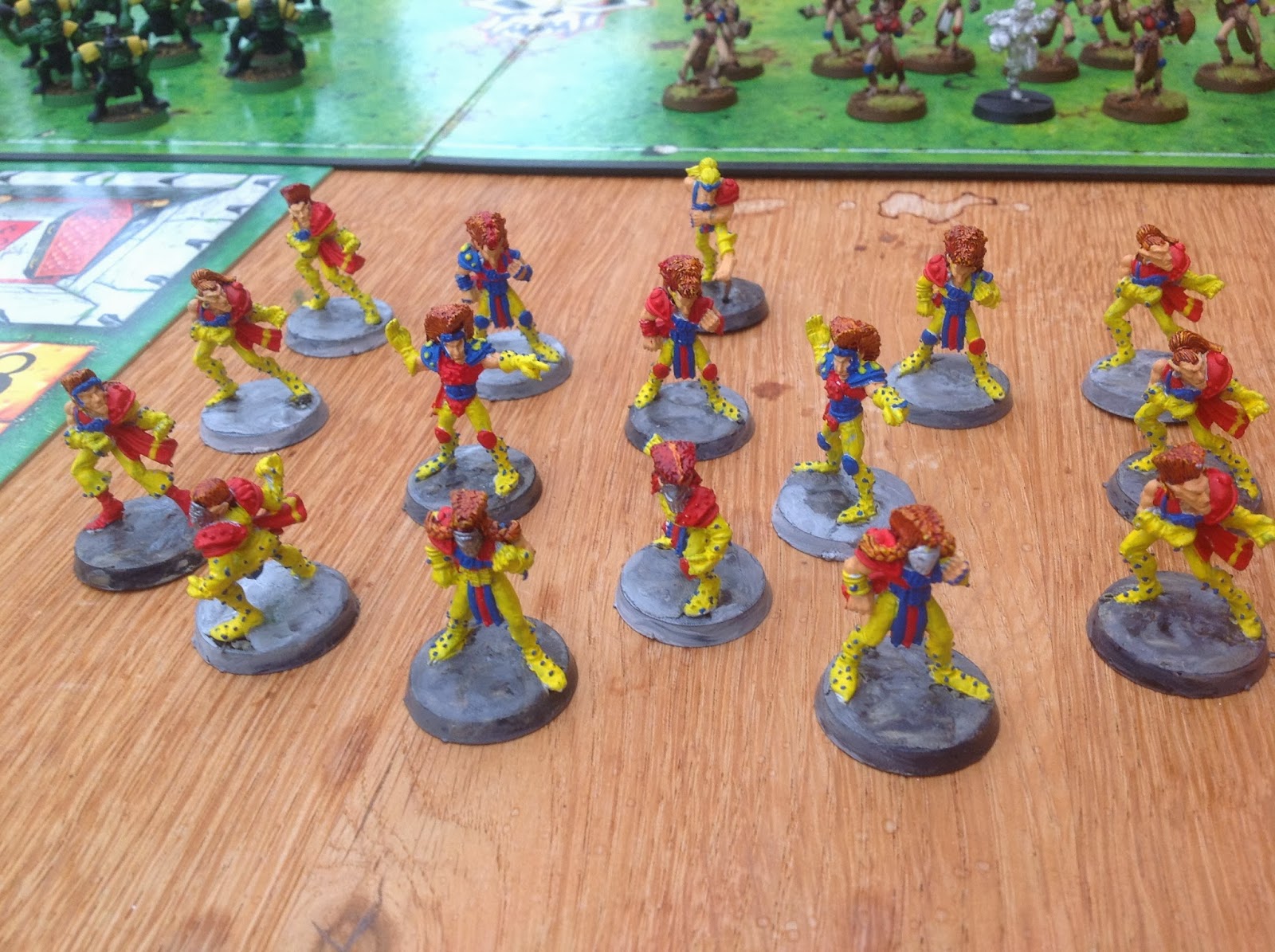 Option 3 - Amazons - Very tempted - I love the models. They are AG3 and very Dodge oriented. Emmm - now that sounds familiar and  I have not exactly been having a positive experience with that combination. The models do need some more paint and that would be fun. 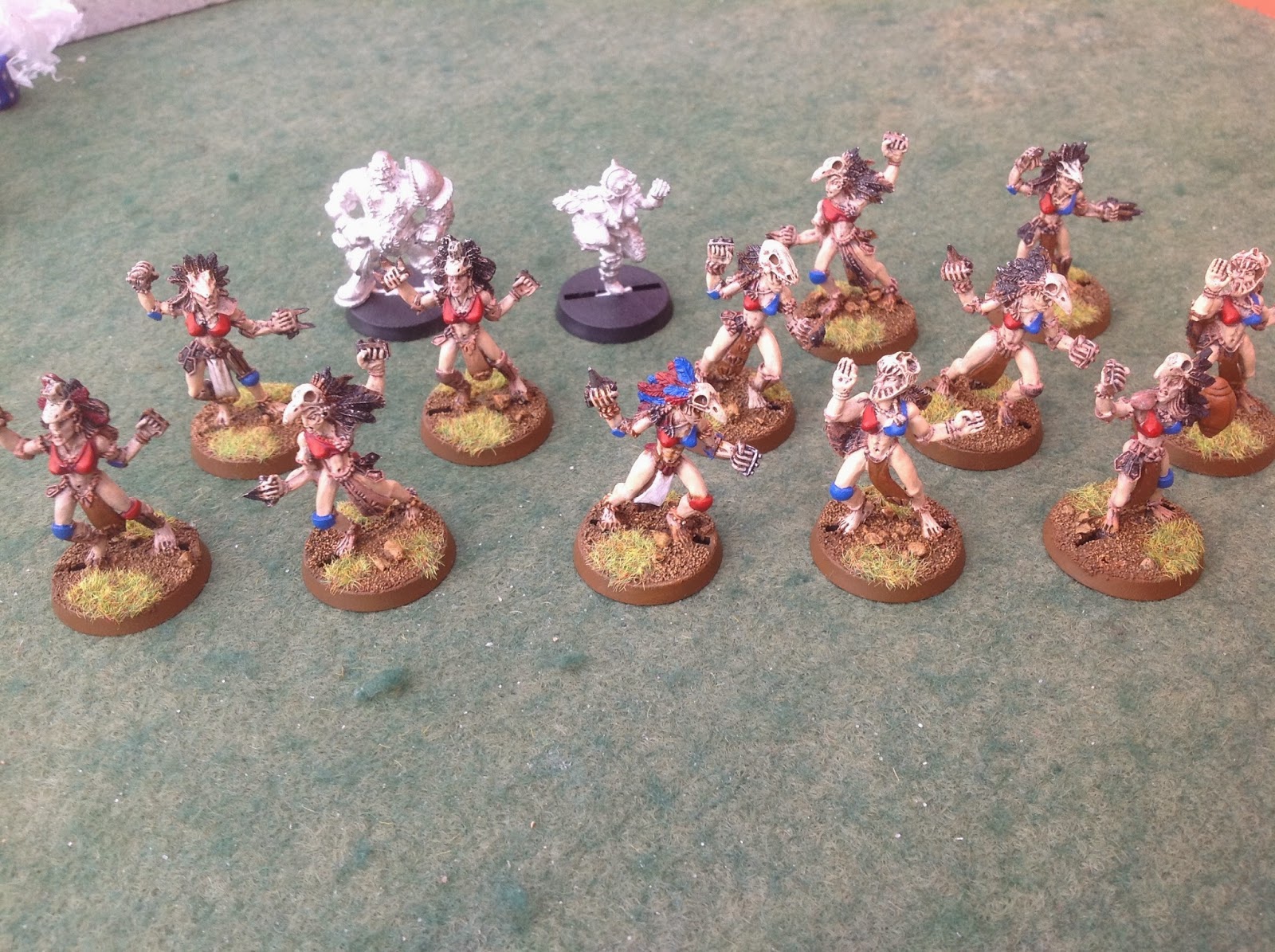 I am thinking that the Elves are very different to the Orcs and Skaven that I have already played so I plan to give them a go. Thinking of a name - the Celestial Unicorns kind of captures the spirit. All that prancing about, leaping through the air and tossing the ball around and thinking that they are god like creatures totally up their own **** - I never did like the Eldar and sometimes it just shows ;-)

They are very interesting indeed having both Throwers and Catchers as well as Blitzers. But the models are costly.

I am used to having 2 Blitzers, this being similar to the Skaven. I feel sure that they will be a vital component. Their stats are MA7, ST3, AG4, AV8. They are 110,000gp each and come with Block and Side Step. Side Step is new to me. Basically if a model with this skill is 'pushed back' the team coach chooses which square the model is moved to and it can be any adjacent square - not just the 3 behind him. That will be interesting and make them more survivable. 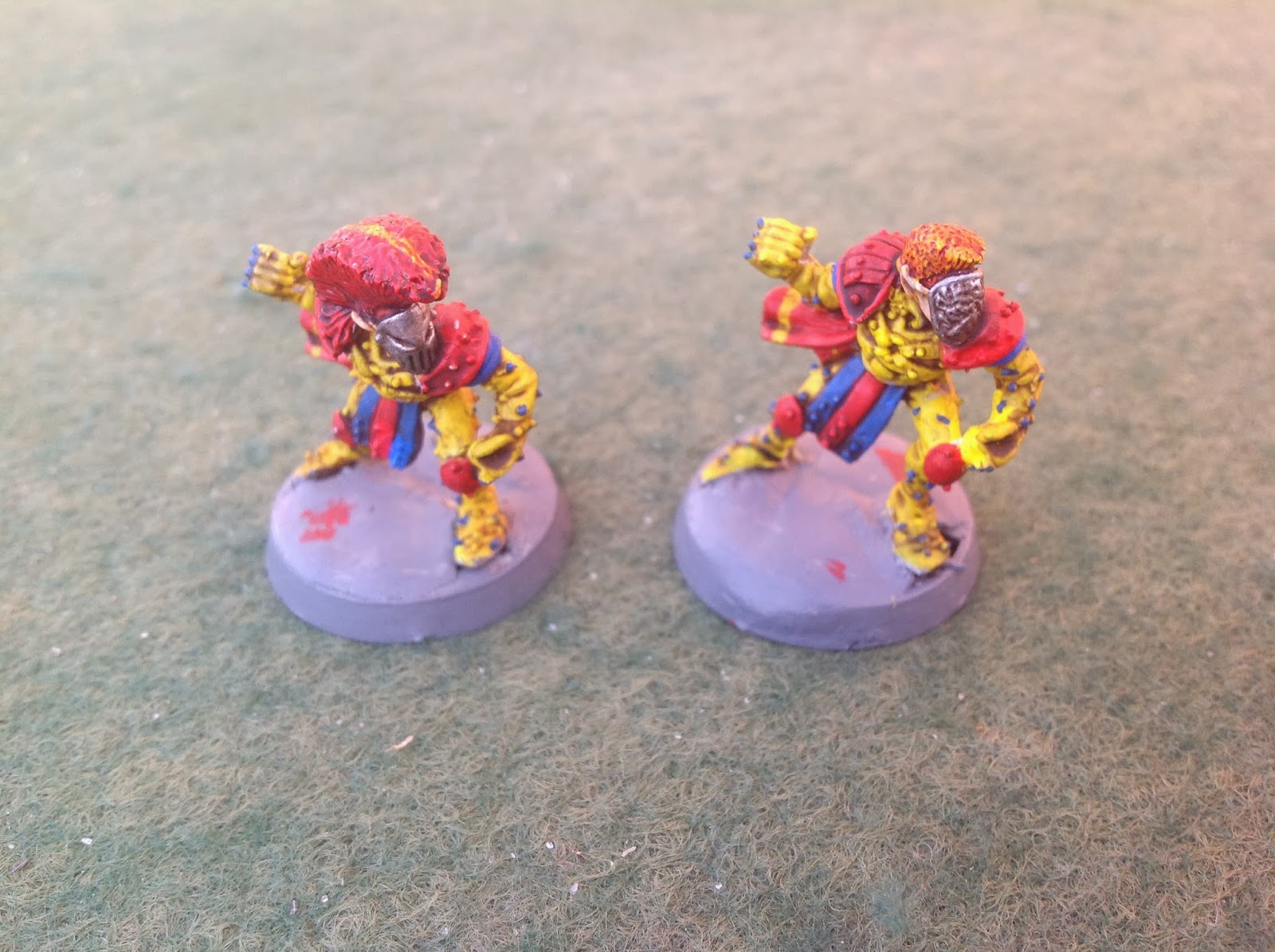 I can only take 2 of them. I reckon they are a 'must have' and plan to take both in the starting roster.

Stats of MA6, ST3, AG4, AV7. They also come with Pass. This is very similar to the Skaven but he has a better AG by one point. This makes him better at picking the ball up and throwing.

These are new to me and man they should be awesome. Stats of MA8, ST3, AG4, AV7 and they come with Catch and Nerves of steel. The MA of 8 makes them vey quick and the AG4 will help them to Dodge about and Catch the ball. Catch gives them the ability to reroll failed Catches. Nerves of Steel means that they ignore the opponents tackle zone modifiers when Passing, Catching or Intercepting. Now that is cool!! It means that I can move my Thrower up as close as possible - Throw to my Catcher (no matter how well marked he is) who can Catch with no negative modifiers, and then run up to 8 squares with the option to GFI twice more. I basically need to keep a Catcher within 8 of the end zone at all times to give me a quick score option.

I can take up to 4 of them in the team and they cost 100,000gp each. I really want all 4 because I know how important it is to start gathering SPP's as early as possible. There just won't be enough money for that though. I want at least 3 rerolls and they cost 50,000gp each. I think I will have to settle for taking 2 Catchers at the start. 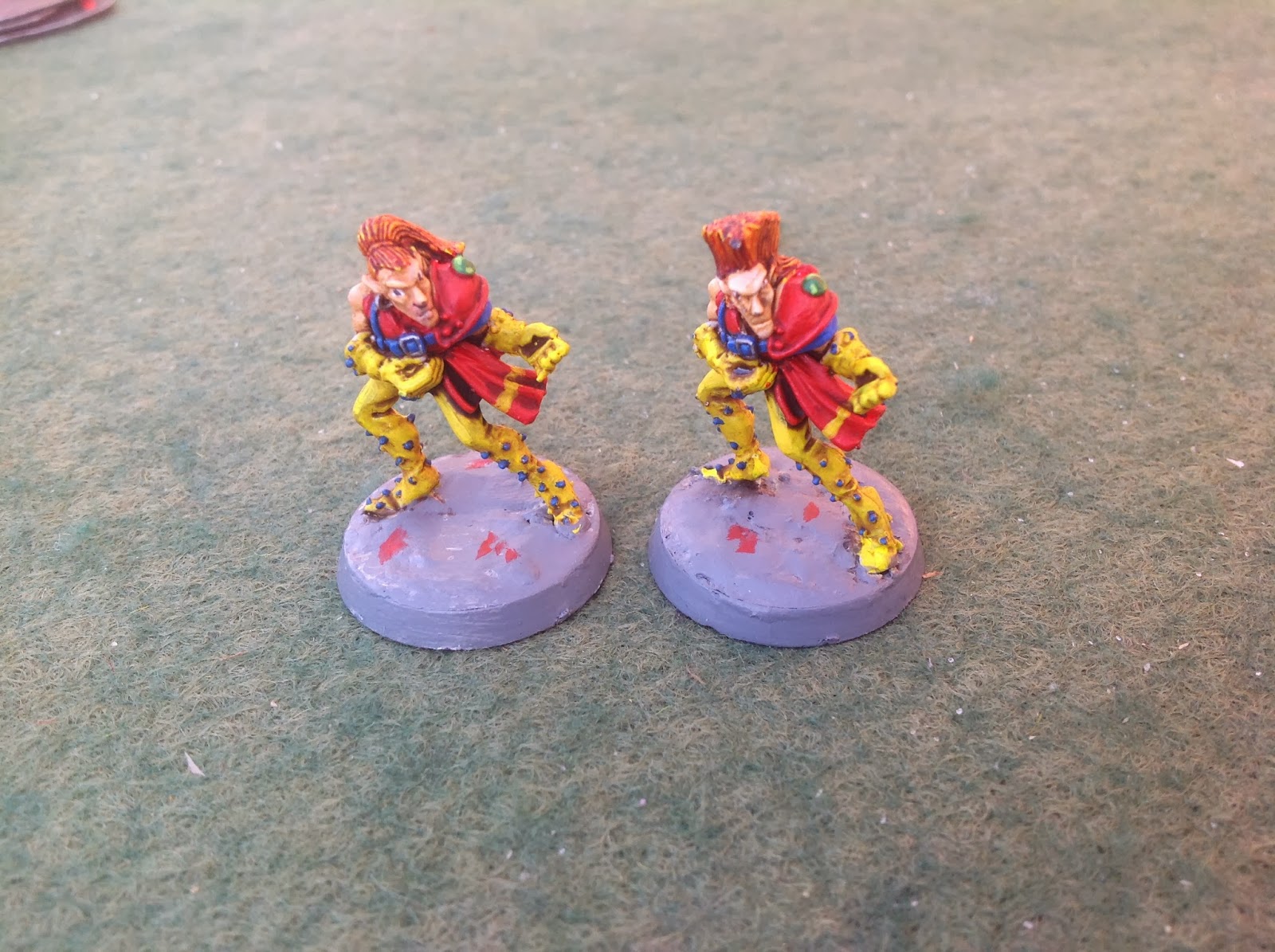 That means that the starting roster would look like this:-

My top priority after this would be to get the Apothecary first and then the other two Catchers. That will be a lot of cash! I think I would also be expecting to lose a player or two to injuries what with having such a low AV.

I have selected suitable models and commenced work upgrading the very basic job that I had done previously. I started by applying a wash to everything and that took the flatness out of them. A lot to do to get them looking good - but looking forward to that. 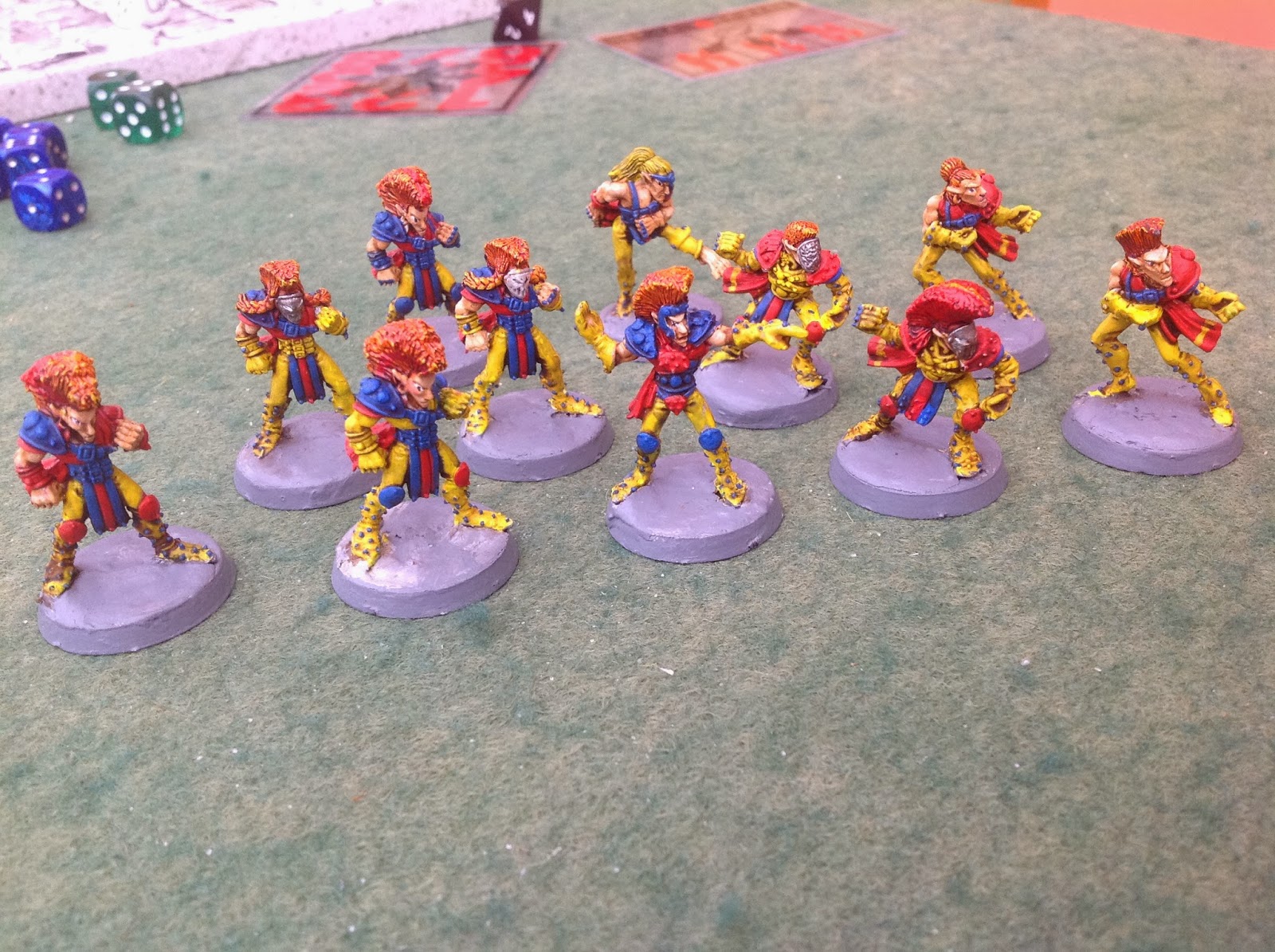 I know that the Elves will receive a bit of a pounding and it is likely to be difficult in the beginning when I have limited numbers but they should be completely different to any team that we have played so far.