Learning the lessons of a Skaven defeat

This weekend saw a rematch between my Rats and the Dark Elves. The Dark Templar has done an excellent match report so I won't duplicate his excellent work. In essence I lost the game 1:2 - but why? What was the learning?

Well first off the Dark Elves played some different, and as it turned out, very effective tactics that forced me to use my Dodge skill much more than previously. From the get go he played an all out zonal defence using two lines of players to cover the board with two sets of tackle zones.

This was to defeat my previous tactics of opening two holes in his single defensive line and then pouring through with my speedy Gutter Runners causing chaos in the back field and scoring quickly. One hole centrally using Block and then a second on one of the wings using a Blitz.

However, I still should have been able to achieve my goal by opening a hole in the first line using Block and then saving my Blitz to open a hole in the second line directly behind the first. In order to do this I would play a refused flank which would bunch up my Gutter Runners to take full advantage of this tube like hole. They should still be able to pour though and fan out maybe using a 'Go For It' or two at the end of my turn to squeeze the extra bit of distance  out of the turn. This would pull back his defence, create some space and allow me to advance the ball.

So what went wrong?

In truth I messed up. I set myself up perfectly, concentrating to the right hand side of the line of scrimmage which is where I intended to make my breech. Placement of my Blitzers and Gutter Runners was the vital component. I counted out the squares needed in my head and I was ready. Then distraction.... I noticed that I did not have full coverage of tackle zones to the left and I thought about the Kick Off table..... what if he got the jump on me? He could flood through into the back field...... So just before the start I shifted my guys slightly to the left and in so doing moved my blasted Blitzer out of range for his vital move. IDIOT!! I shouted at myself (in my head) once I realised my error early in the first turn.

Now instead of a hole I had created a small bulge to the right hand side. Not my plan and was forced into a defensive 'cage' until I could rectify the situation. 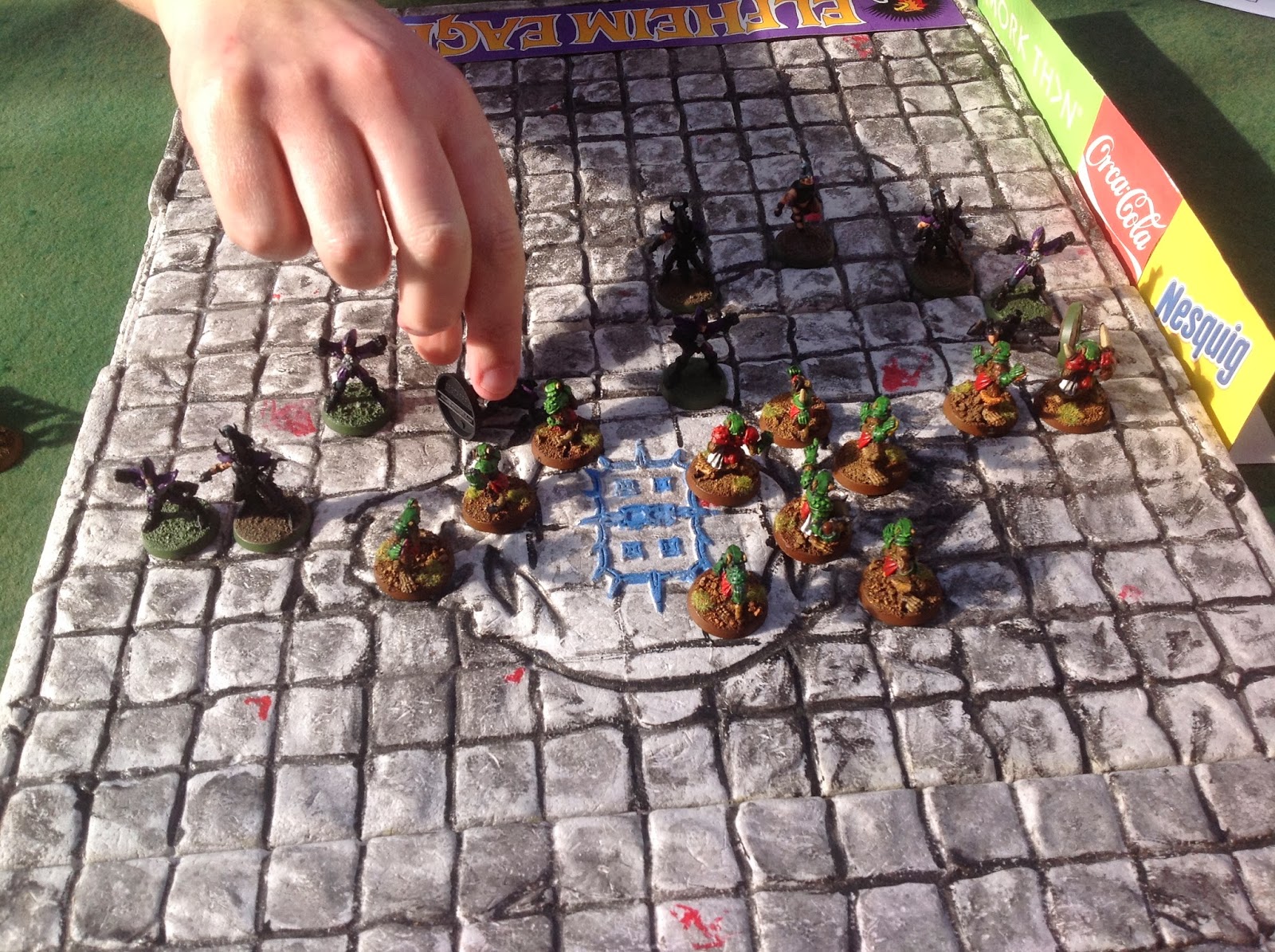 And forced is the wrong word. I was stupid enough to advance the ball and form a cage with the rats which invited trouble. I could have easily hung back and used the Gutter Runners more wisely. Not only this but I moved my claw Blitzer to the side of the pitch. I promised myself never to this. The Skaven only have two Blitzers and it is vital to keep them central to the action if I am going to force the game. I learned this in the second half of the last match.

The Dark Templar brought the pressure, which I was to expect. He started hitting me hard and man marking my Gutter Runners. This is fine normally because I can suck him in close and then dodge out to create the much needed width and fluidity to my turn.

However not on this occasion. Over 3 turns I failed 6 consecutive dodge rolls (failed dodge followed by failed reroll) causing turnovers in the process. There was a limited amount of movement and Blocking in between, but limited is the right word. This allowed the Dark Elves to get really close and stay close and pummel me. Ouch, ouch and treble ouch. I started to lose players to the sidelines with high dice rolling by the Dark Elves. My dugout was filling up fast. I had only started with 11 players so this was going to be both a short and medium term problem. 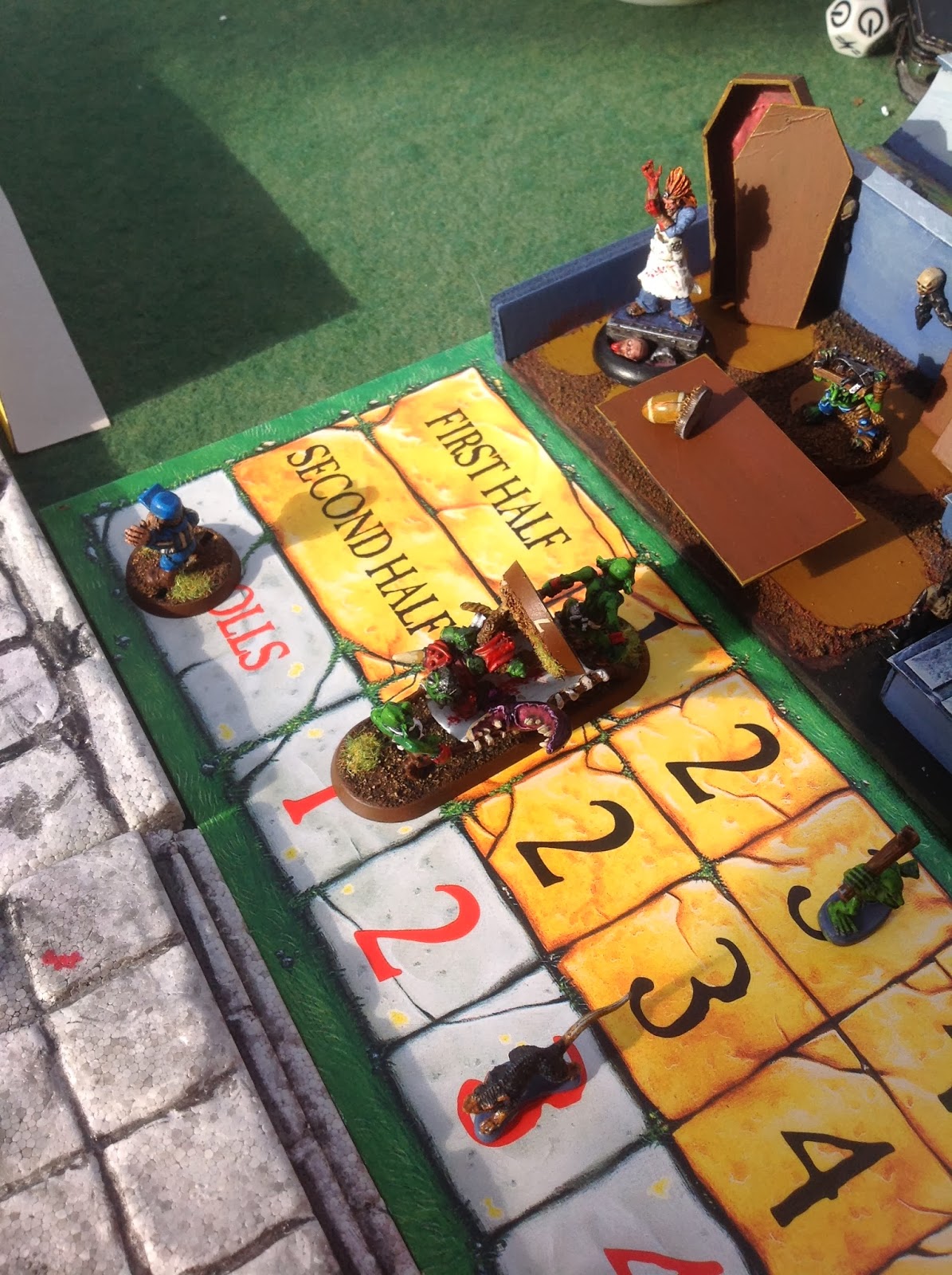 At the beginning it was funny as I loaded up the new orderlies stretcher. It became less funny which each occasion! 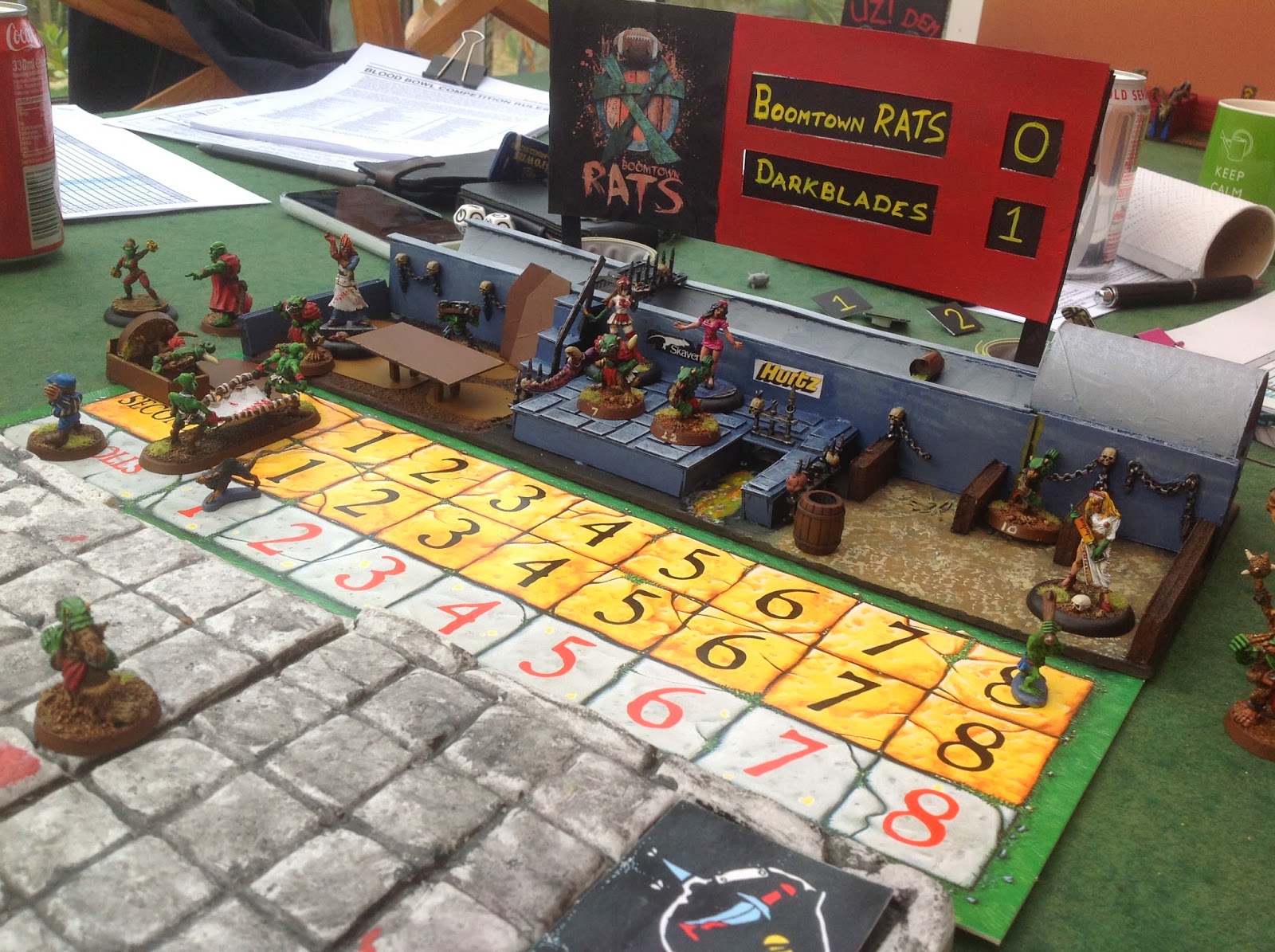 I lost both Blitzers, the guy with the claw was my own poor placement. He got bundled into the crowd with some shrewd push blocking! One of my Linemen DIED! and I lost more to the KO'd box.

Any kind of recovery from this position would require a minor miracle and to be fair in the second half I nearly pulled that off with some extreme tactics and very lucky dice rolling which is alway spectacular. 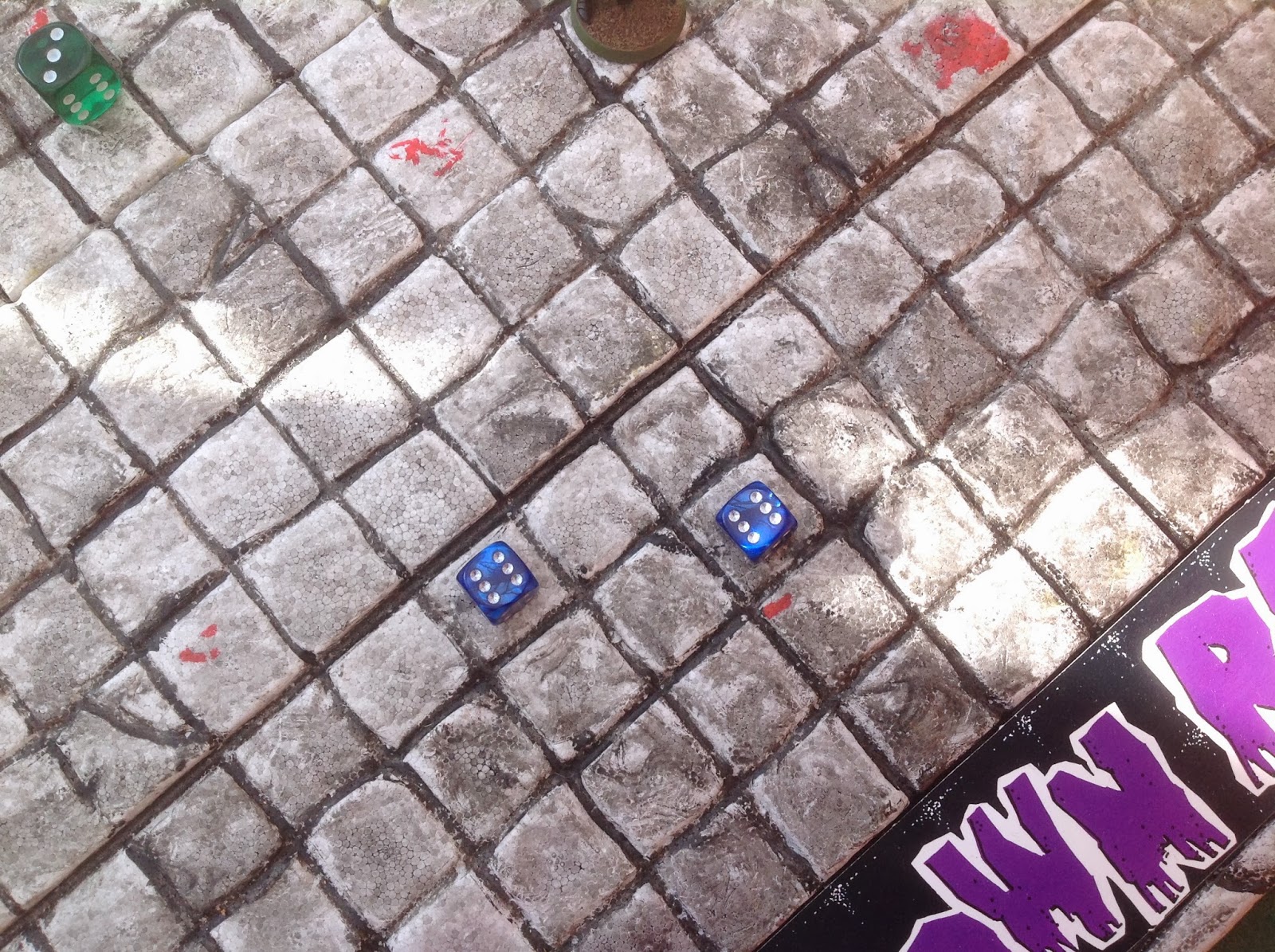 Six to Throw followed six to Catch for my touchdown wan't bad! (but not to be relied on)

1. Make a plan and then focus on its implementation. Beware the distracting thoughts.

2. Reduce the need for dice rolling and where possible give yourself the maximum opportunity for success.

3. Blocking and Blitzing is better than Dodging. Bringing up a Lineman or two and Blitz your way into space with a Gutter Runner. This may be more guaranteed than Dodging. At least to get one guy free and give width to the game.

4. Position the Blitzers with care and focus them on the action. I was much better at this in the second half. I would Blitz out to the sidelines but then recover to a more central position. This also creates greater threat.

5. Rats need numbers. During a game it is clear that I will need reserves so make sure that there  are at least 13 players in the squad. Otherwise you may find yourself with a very thin defensive line a vital stage in the game.

6. Use the Thrower to pick up the ball - but don't be afraid to handoff to a speedy Gutter Runner. Speed and movement at the back of the field potentially opens up space. Moving left and right stretches the defensive and staying deep can just mean that there is more space downfield. Patient - be patient.