So the challenge has been thrown down to create a couple of Joker crews so that we can get a game or two under our belts. The first crew is to be 200 points of Reputation and the second 350 points.

Lets start with the models that I have purchased and see where that takes us. 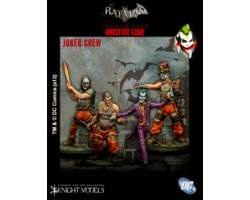 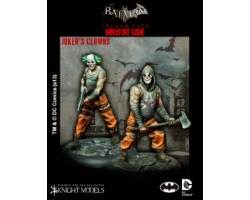 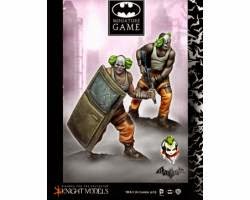 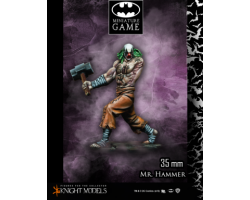 And I already have Harley Quinn (61 rep)

I have started reading and all these models don't necessarily go together so I will have some thinking to do. Lets have a look at some options and how a crew comes together.

The gang limit is set by Reputation Points together with dollars. For every 150 points of reputation I gain $500 to spend and the option to take a Free Agent.

The basic dynamics are that I can have one Leader, a Sidekick, Free Agent's and lots of Henchmen.

The main limitation here is that I can take a single Free Agent and I have $500 to spend. I don't have any Free Agents as yet so that is an easy decision. I think that the dollars should be spent, $300 on Triston and use the remaining $200 on extra ammo.

It seems reasonable that I take Harley Quinn as I have some paint on her so that will be another 61 rep. That is 177 total leaving me with 23 to spend. Contra-August costs 21 rep so I reckon that is the way to go to make sure I am getting value for the points available.

Now the only thing about this is that Harley Quinn has rules that influence other members of the crew and there are very few here. Emmmmmm. Also the Joker has a Chaos Agent rule that helps all members of the gang other than his Sidekick. Maybe when the crew is this small I should consider not taking a Sidekick?

I could take August 25, Contra-Auguste 21 and Clown (knife) 15 instead. This would probably have better balance.

Plenty to think about here and probably best to play a game first however there will be three Free Agents available and $1500 to spend. On this basis both Snickering and Triston will be in play so that will be $900 plus $400 on extra ammo leaving me with £200 to spend.

That is 241 in total however I can only take one Sidekick so I will need to get in another few crew members for when we step up to this level.

Looking forward to it.