Now that I have the Chaos Daemon Codex I have been learning a lot. I have been looking at Tzeentch as they Hate Nurgle. They are also very much focused on magic. There is a variety of units available through the Malefic Powers route. 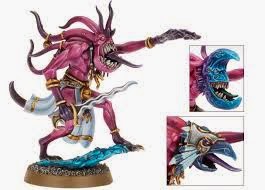 The Herald is interesting because it comes with 30 points worth of gear. The basic model is normally a HQ choice costing 45 points and is a Pysker (Mastery Level 1). 25 points can upgrade him to Mastery Level 2. Casting Sacrifice is also quite cheap at Warp Charge 1.

Being a Daemon of Tzeentch is also cool because there is a +3 modifier to Leadership when manifesting powers. You can also reroll any saving throws of a 1. The basic Leadership is already decent at 8. This makes it very likely that the Physic Test will be passed.

Summoning a Herald also means that you can add to the Warp Pool in following turns. I think you would want to summon a Herald every turn if possible.

The Herald can also take Daemonology Malefic Powers and so can start to summon things to the table himself so potentially adding even more Heralds. By turn 3 they could begin to focus on summoning units of daemons. 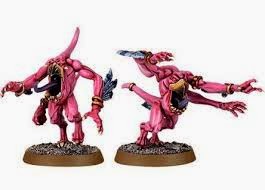 They are also Daemons of Tzeentch so add +3 to Leadership. They too can take Daemonolgy Malefic Powers.

They are Brotherhood of Psykers and as such have a Mastery Level of 1. 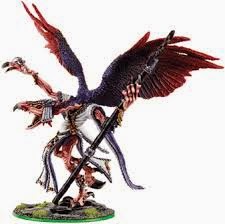 This is a 230 point Monstrous Creature. A level 2 psyker with a Leadership of 9 and comes with Daemon of Tzeentch.

I could see a situation where the Ork Weirdboy goes for the Possession straight away bringing a much more powerful magician to the table who then starts summoning further deamons with much greater reliability.

This is proving to be an interesting exploration and no mistake.