Da Stompa in play - thoughts of a defeated general.

Well now that I have played Da Stompa I feel that I know so much more about about it. It is great fun on the battle field and no mistake! The Dark Templar has done a cool battle report which is worth a look. 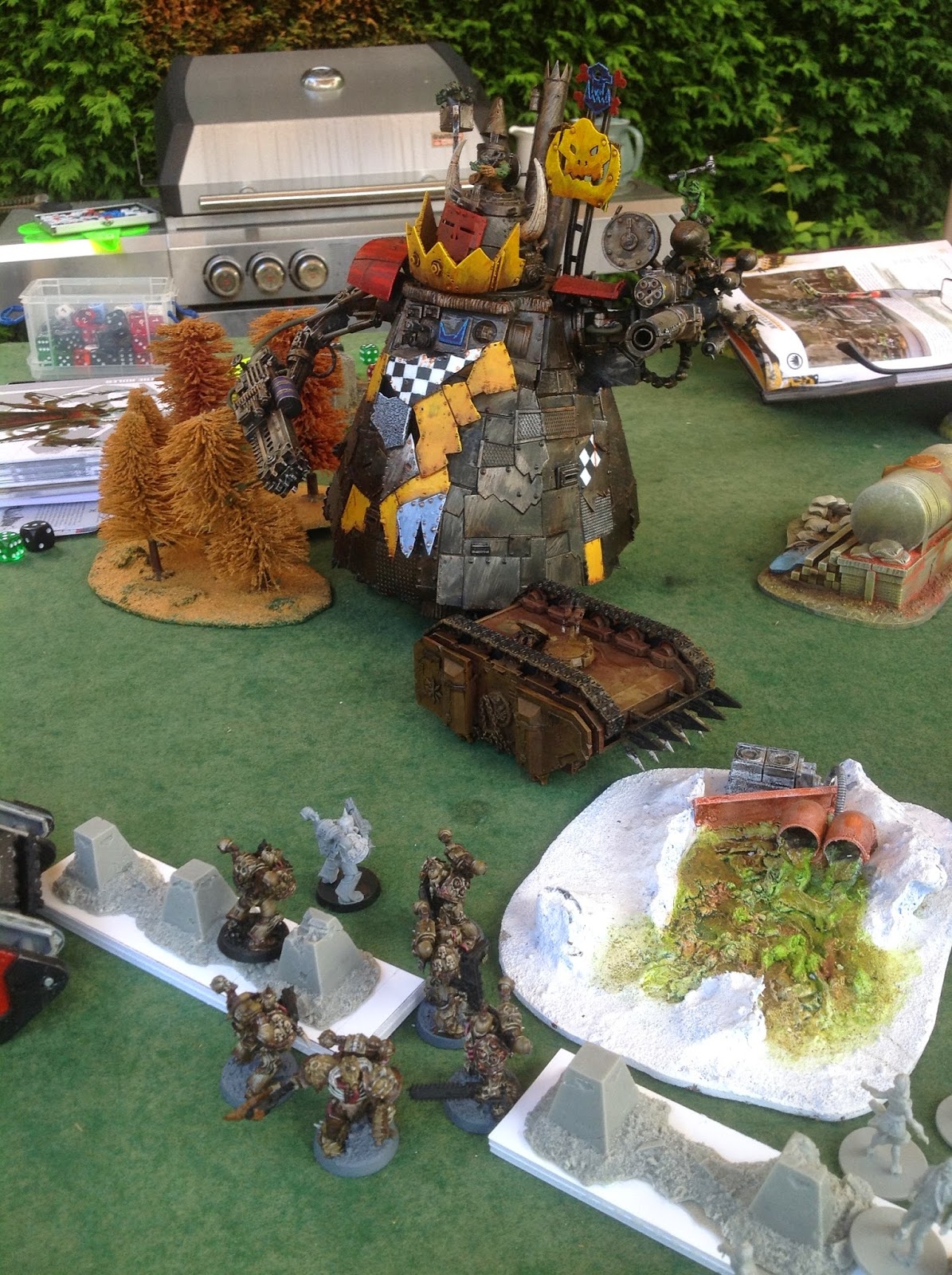 I think that I have learned a number of things: -

1. The Mek Boyz are important to repair HP's have a number of them and don't forget to use them!
2. The KFF is necessary and it has a range of 6" around the Stompa - make use of this.
3. Who is carried inside is important - think shooting. There are four fire points.
4. There is potential to take several small units inside.
5. It not great against lots of AV14! Blow up transports early and get troops out in the open.
6. It can get bogged down in hand to hand so support him with something that can help.
7. Beware of magic - I had 'weapons get hot' cast on me a lot so any 1's were hurting me.
8. He is huge on the table - hide something behind him - A unit of Boyz in a Trukk would be good start and would help with any potential hand to hand volume.
9. He is not an assault vehicle and there is only one access point, at the back. Whatever gets out needs to be able to shoot.
10. His blast template weapon only scattered one D6. Be brave!
11. Melta weapons are not to be tolerated. Have a plan to deal with them.
12. Max out on Supa Rokkits and use them when you can
13. Grot Riggers are worth a thought.

He is lots and lots of fun to play but he is not a one man army. Now that I have a 'feel' for him I need to consider what complements him. He is the star man but everyone benefits from a team approach.

I am liking the idea of Killa Kans in front and to the side of him. Maybe a full unit of 6 all benefiting from the KFF. They have a BS of 3 so decent shooty weapons would be useful. This will slow things down a bit but that is fine.

Have a small unit of Lootas inside manning the fire points. This will add weight of shots. Upgrade to as many Meks as possible.

I also like the idea of a small unit of Tank Bustas with Squigs. These can disembark in turn 4 or 5 and  use the Squigs. They will also be fearless within 6" of the Da Stompa.

When he goes down he does it in style with a huge explosion. It would be nice to be in hand to hand if that is going to happen ;-)

I would welcome any other thoughts. Its always good to get another perspective.