I played my Ork Pysker, 'Eadcrumpa, in our first 1500 point game. 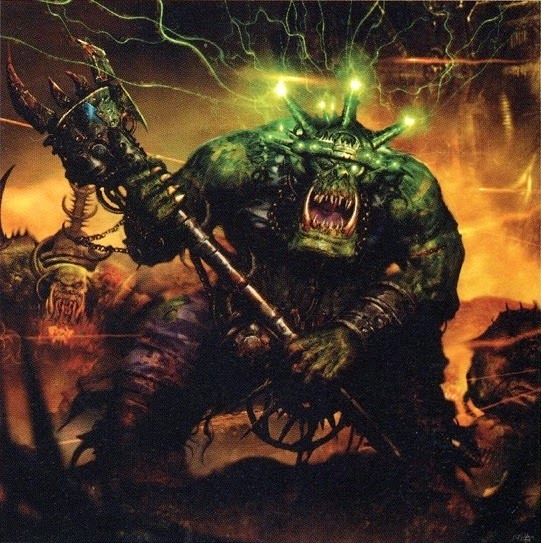 I gave him abilities from the 'Powers of Waaagh'.  This seemed to be very appropriate and in keeping with the story line. He really brought something to the game when he rolled for 'Da Jump' and 'Power Vomit'. I was able to Deep Strike an entire unit in behind the enemy and then used Power Vomit on a unit of Obliterators. It was hilarious.

In the second game of 2500 points I did not take any magic at all. 'Eadcrumpa had died spectacularly and it was as if Ghazghkull had seen enough and turned to the Mekboyz instead.

For the next big game of 4000 points I am thinking of turning back to magic with 'Agor the Mad'. However this time a corrupted version. In my head Agor, 'Eadcrumpa's second in command, has been effected by his time on this world of Chaos and his powers have evolved such that his abilities are now those of Daemonology.

I just love the idea of Orks using Malefic Powers and summoning daemons to the table. And think of the opportunities for conversions .....

The are four ways to summon demons: -

1. Primaris Power (This is automatic - no rolling required) - Summoning, this summons a unit of your choice who arrive by Deep Strike within 12".
- 10 Bloodletters of Khorne
- 10 Pink Horrors of Tzeentch
- 10 Plaguebearers of Nurgle
- 10 Demonettes of Slannesh
-  5 Flesh Hounds of Khorne
-  3 Flamers of Tzeentch
-  3 Nurgling swarms
-  5 Seekers of Slannesh

Then the next three can be rolled for.

2. Sacrifice (D6 of 4) - Conjure one of the following units of your choice Herald of Khorne, Tzeentch, Slannesh or Nurgle with 30 points of options.

3. Incursion (D6 of 5) - Conjure one of the following units of your choice 3 Bloodcrushers of Khorne, 3 Screamers of Tzeentch, 3 Plague Drones of Nurgle or 3 Fiends of Slannesh.

4. Possession (D6 of 6) - Conjure one of the following of your choice 1 Bloodthirster, 1 Lord of Change, 1 Great Unclean one or 1 Keeper of Secrets.

The big question is where to start? The idea of Bloodletters joining an Ork army is pretty cool but then again so is the idea of sending Plaguebearers in against a Nurgle opponent. This is going to require some thinking.

I would welcome any thoughts ...