I thought I would explore what deamons I have in preparation for the great conjuring of 'Agor the Mad'. Its funny how the mind works and over night I have been wrestling with the issue of how the daemons would know to fight on the Ork side? I have decided that as it is the  Ork 'Waaagh Energy' that has spawned them then they are caught up in the Waaagh and are driven to destroy the hated enemy. This makes sense to me ;-)

One of my very first armies was Khorne. They were the first army that I took to a tournament and I used to play them with lots of Bloodletters. A quick hunt in the garage has revealed a surprising number of Khorne daemons. 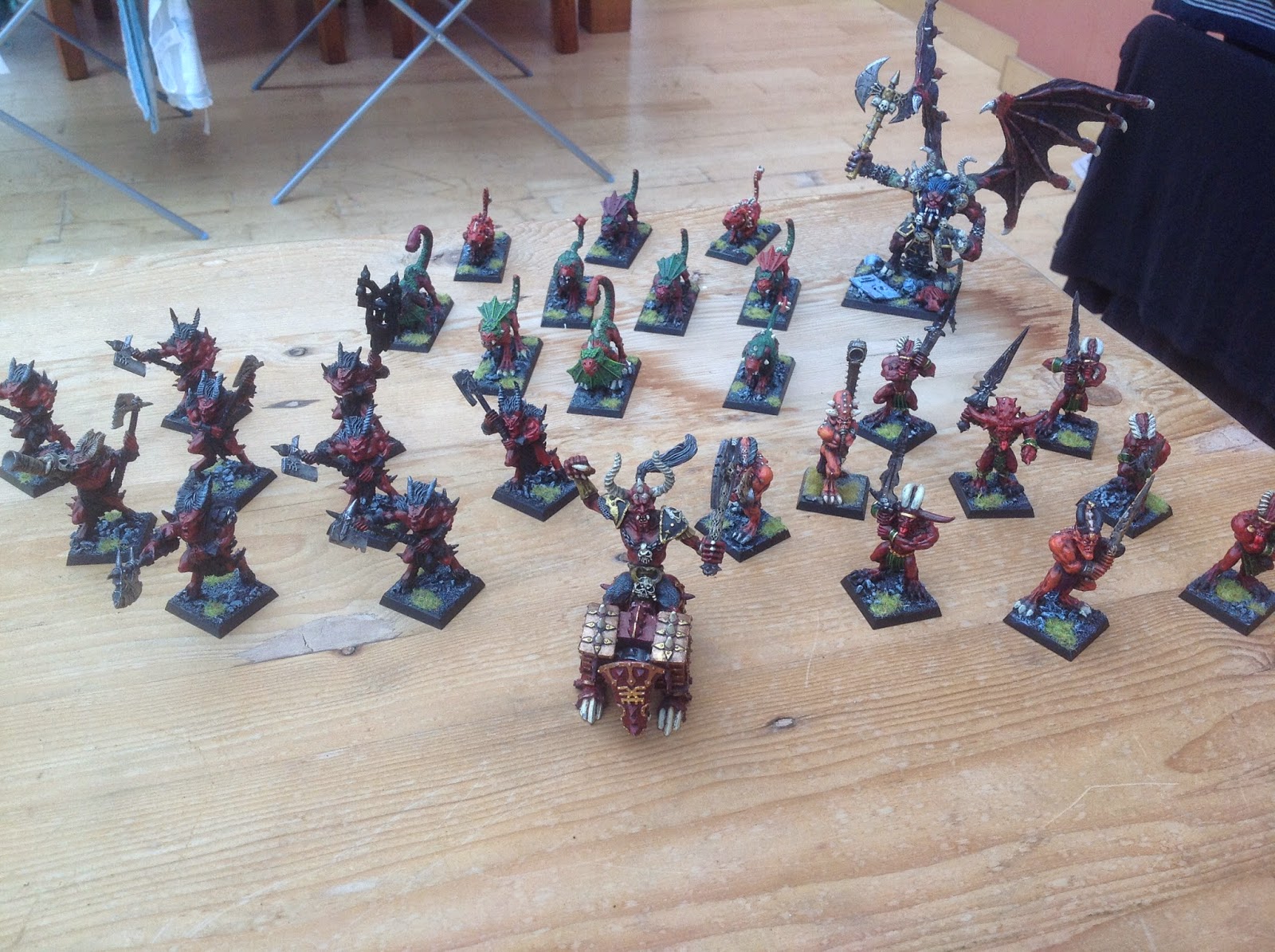 I had forgotten about the hounds altogether and I think I have another set of the old Bloodletters on the right somewhere. I really must get better at keeping stuff in the same place.

Possession allows my Ork Weirdboy to turn into a Greater Daemon. The Bloodthirster was my first really big model and I did love him. He is metal and at tournaments the wings and hands kept falling off until I was educated into the fine art of pinning. It would be glorious to see him on the battlefield again.

I would have enough models to field a unit of 10 Bloodletters or 5 Flesh Hounds of Khorne for the Primus Power - Summoning. That is good.

I have another Bloodcrusher of Khorne somewhere although not painted. The Malific Power - Incursion allows you to take three of them in a unit so I would need a third in order to use them. This would give me at least one allowable unit for this spell as I don't have any Fiends of Slannesh.

More recently I moved into a Slannesh army. I had great hopes for it. Some of the Slannesh models are just great however you do need some expert painting skills to do them justice and I'm afraid that I lack a little in this area. Anyway I had gathered some Slannesh daemons during that period. 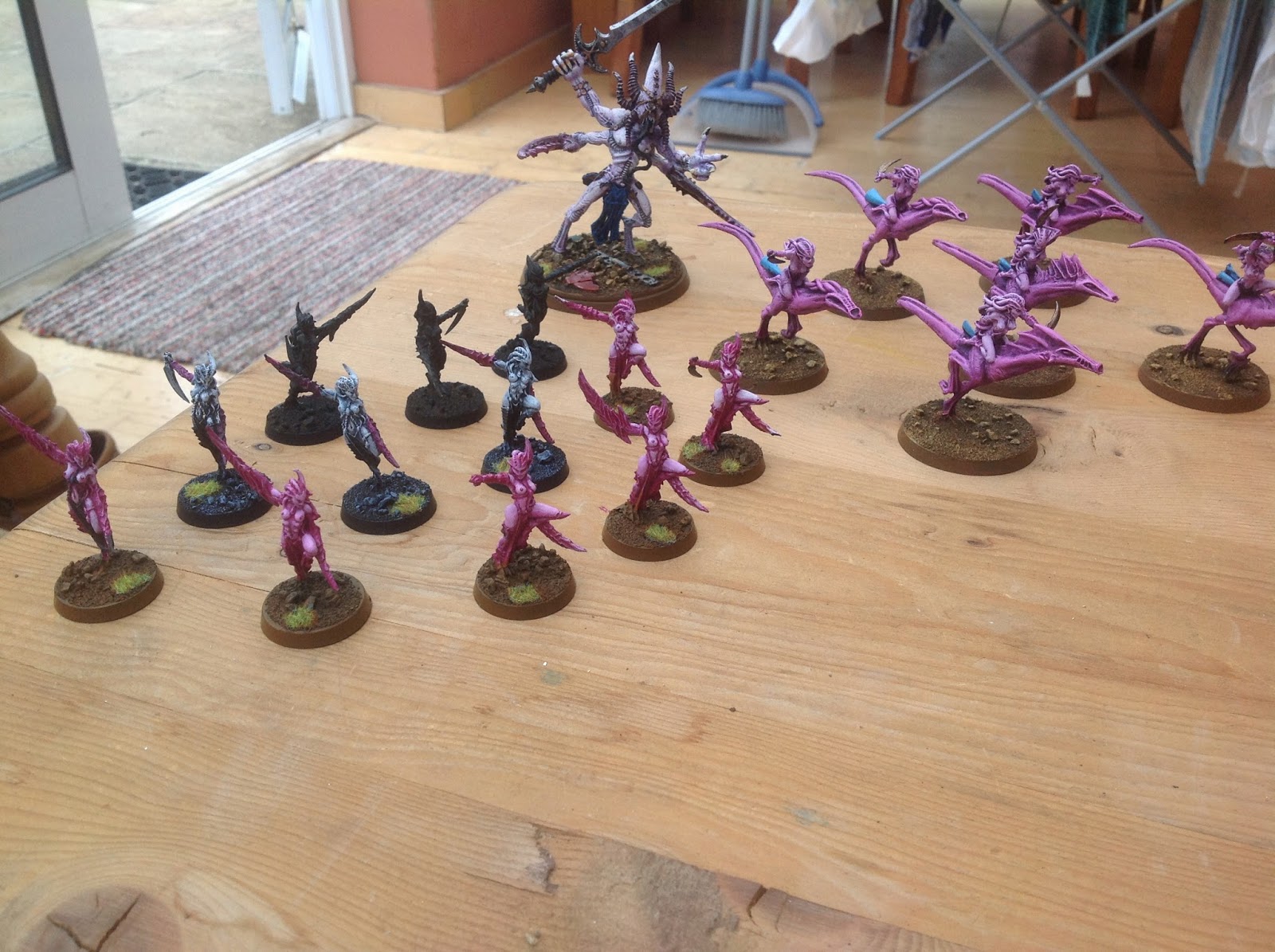 The Daemonettes of Slannesh are mouth watering and I spent ages trying to get the flesh to look decent.  I have 12 models so that will be enough to field a unit of 10 as allowed by the Primus Power - Summoning. I also have enough Seekers of Slannesh to field the allowed unit of 5.

Possession would allow 'Argo the Mad' to transform into the Keeper of Secrets. This model always seemed to do well for me.

The spell of Sacrifice is therefore a potential problem as I don't have any Heralds however I suppose I could just use any chaos model as a stand in for this.

Other than that I believe that I have some of the really old Pink and Blue Horrors of Tzeentch and a few Plague Bearers of Nurgle. We used both of these for some of our early games of Necromunda. I don't think that I will be able to muster units of 10 though.

It would be nice to have a greater variety because the units could be very situational in that they will excel at certain things. I will need to get a set of the Daemon rules and then   .......    Orky Daemons.