Typhus gets his feathers!

Well the mighty forces of Nurgle continue to dish out some serious pain. Ouch!!

The latest battle was 2000 points each side and we were using the new Dark Angels codex, and a few new models. I took the Landspeeder Vengeance, Ravenwing Darktalon and the the Deathwing Knights. So basically all my new models - well you got to see how they play and reading the codex only goes so far. 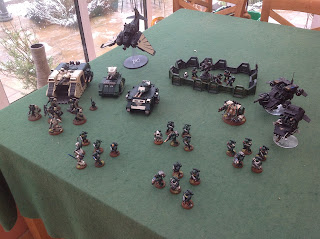 I came to the battle determined to be defensive. My overarching plan was to assault the Knights and Belial from the Landraider having dropped a stasis bomb on the unit that I wanted to hit. Hopefully the nurgle leadership squad. Chaos have to challenge in melee and I thought this would be the best way to sink Typhus.

Everything else should delay, distract and disrupt to increase the number of turns that I would have shooting.

This all went a bit 'pear shaped' when we rolled for our mission and we ended up having to gain control of a relic that was placed at the centre of the board and we had 'night fighting' in turn one. A full turn of lost shooting - not what I needed at all. 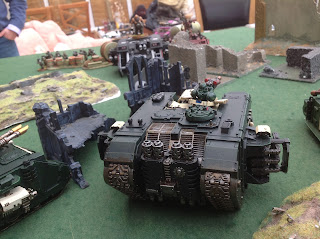 The set-up was from the corners and we pretty much faced off, each eying up the other with the objective between us. I pushed my forces to the right attempting to draw out the nurgle forces. 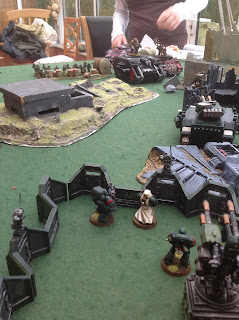 Moving my vehicles like this left me with good sight lines to the objective. I just needed to break open that land raider and the fun could begin. I felt the best way to do this was to send in my Venerable Dreadnought whilst taking pot shots with my lascannons.

My Darktalon arrived in turn 2 and I sent him down the left to play with a pack of 36 zombies (cadian zombies) whilst waiting for his big moment - the delivery of the stasis bomb! 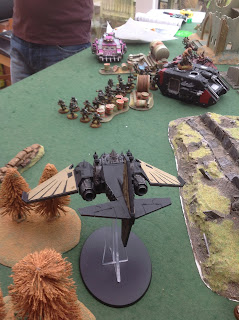 I knew that I needed to thin out the zombies before I could engage them in melee. I learned that lesson in a previous game. I could have three good turns to do just that and in the mean time just keep away from them.

Things started to go wrong when I lost my Dreadnought and Razorback early on. This took a lot of 'threat' out of my force. My Vengence Land Speeder took out a Rhino that was advancing on my right flank and spilled the marines who in turn were shot up by my Innterogator-Chaplain and the unit of 5 that he had joined. We took some damage in return and then the Chaplain charged. 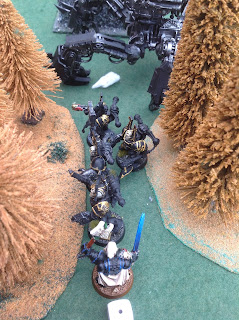 Then the Helldrake made its appearance. 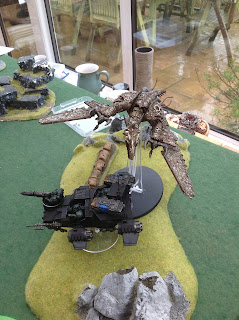 My quad gun opened up on it as soon as it arrived. It was the reason that I had brought it. I knocked lumps out of the Helldrake but it was still alive and proceeded to rip up the right flank taking out my Vengance Landspeeder and a couple of units of marines. I couldn't use the quadgun in my next turn as it had fired during the chaos turn. It did take out the Helldrake in the following turn but the Helldrake had served its purpose. A job well done but my god that Helldrake is as awesome to face as it looks. Well done Dark Templar it is superb!!

Meanwhile the centre of the board was developing into a real feast of action. 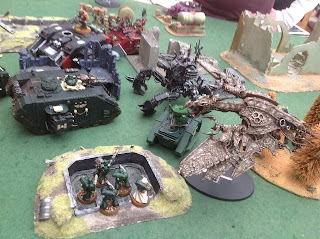 Typhus launched his Landraider past the objective blocking line of sight for most of my remaining guys. A second squad of chaos marines excited their Rhino and snaffled the objective, leaving the Chaos Sorcerer free to to join in with Typhus.

The Defiler tore open my Landraider which meant that the Deathwing Knights had to deal with it, and they did. I do like their weapons. 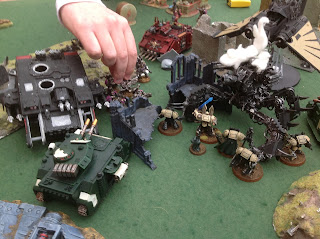 Now came the big moment. Turn 5 and it was stasis bomb time!! My Darktalon swept over the massed troops and successfully bombed the Chaos marine squad. My Deathwing Knights were where they needed to be to engage the leadership group. The Challenges had to come.

And guess what - they did but from the Chaos Champion and the Chaos Sorcerer. Typhus did not step up to the plate.

It is on days like these that legends are created. On this day, February 10th in the year of our lord 2013 Typhus acquired his tail feathers along with a wonderfully crafted yellow stripe that will ever be visible to the forces of the Dark Angels. It is positioned directly along his spine!! lol.

The game ended at turn 5.

It was a chaos victory 4 - 0. They had the objective (3 victory points) and had taken 'first blood' (1 victory point). But physiologically Belial had the pleasure of remaining on the field and witnessing Typhus quiver. A good feeling indeed!

A very enjoyable day indeed. I have learned a lot, but more on that another time.