Getting the best out of Belial

I have been reviewing the lessons from our game at the weekend and it seems to me that: - 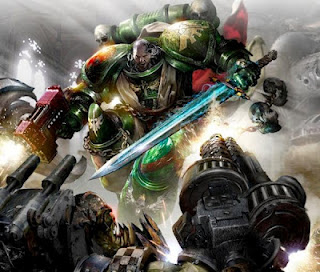 So first things first - lets review the rules for Belial against Nurgle and then work out how to make the most of them.

Shooting
I had been playing Belial with a pair of 'Lightening Claws' and this means that we lose some of his shooting prowess. I switched just before the start of the last game but did not get the advantage due to my tactics.

Belial is BS 5 which is a good start. He comes with a storm bolter R24", S4, AP5, Assault 2. He is a member of the Inner Circle and therefore has Preferred Enemy Chaos and therefore rerolls any '1's' on both 'To Hit' and 'To Wound'. He also has Vengeful Strike meaning that his shots are twin- linked when he arrives from Deep Strike and he has Marked for Retribution granting Precision to his shots i.e. all shots that are 5+ 'To Hit' are resolved on a model of Belial's choosing.

So he hits on a 2+ and can reroll any '1's' and he is also twin-linked on the first round arriving from deep strike. That should be 2 hits with a 33% chance that he achieves 'Precision'

Belial could therefore target a specific model perhaps with a Heavy or Special weapon. There is good potential to take out high points in the first round of shooting.

The downside is that the Storm Bolter is an Assault weapon not Melee so we will lose an attack in hand to hand.

Deep Strike
That is a good start but he must be coming in by Deep Strike to maximise the benefit so lets review the implications of that. He has some good special rules here. Tactical Precision means that he does not scatter when coming in by deep strike!! This takes all the chance out of the manoeuvre. He can land exactly where required and force the enemy to turn and face him.

He also has Deathwing Assault. So no need to roll for Reserves. Belial gets to choose to come in on turn 1 or 2 and that is when he will arrive. This rule applies to all models in Terminator armour so several units can arrive together but only his unit has Tactical Precision.

However Belial is also fitted with a Teleport Homer so units can arrive to his position (first model within 6"). The Teleport Homer must be on the table at the start of the turn. So if Belial arrived in turn 1 then any units arriving from Reserve in subsequent turns could be placed with a model within 6" of him. This can include Dreadnoughts etc etc.

Surviving in the open
Belial has the 2+ save granted by the Terminator armour and also comes with an Iron Halo which grants a 4+ invulnerable save. He also has 3 wounds.

In truth, he needs to be surrounded by a big group of Terminators to make the tactic viable. This is a group of up to 10 Terminators and they will come with the Split Fire and Vengeful Strike rules so that in the first turn of Deep Strike they can fire at more than one target and benefit from the twin-linked advantage. So a twin-linked Assault Cannon and a twin-linked Cyclone Missile Launcher (one for every 5 models) The Assault Cannon R24", S6, Heavy 4, Rending - Ouch! and the Cyclone Missile Launcher can go Frag or more likely Krak R48" S8, AP3, Heavy 2. And remember this will be twin-linked and likely against rear armour - double ouch!!

Hand to Hand
Belial has a WS of 6, S4, I5 with 3 attack's as standard. There is a good chance that he will be striking first. His weapon of choice is the Sword of Silence which is AP3, has Fleshbane (wounds on a 2+) and is Master Crafted so re-roll any 'to Hit' rolls of '1'. He also has the Inner Circle which allows re-rolls of both failed 'To Hit' and 'To Wound' of '1'.

So he likely to be rolling 3 dice looking for 3+ 'To Hit' (so 66% chance To Hit) with re-rolls of any '1's'. There should be 2 hits really. He will wound on a 2+ and re-roll any '1's' so that should be 2 wounds but there is likely to a 66% chance to save if fighting marines. He is likely to be in a 'Challenge' so the real pain needs to come from the supporting unit of Terminators.

This will be increased if he is on the Charge and there is also the potential to take Deathwing Company Banner which grants +1A to all models within 6".  The bigger the unit of Terminators, the better value this would become.

Note - Nurgle come with blight grenades which takes away an attack.

Spreading the Inner Circle influence
I have been looking at how I can bring more characters to spread the effect of Inner Circle.

Of the HQ choices available neither the Chaplain or the Techmarine benefit for this rule. The choices are therefore: -
a) Librarian at 65 points
b) Company Master at 90 points
c) Interrogator-Chaplain at 110 points

So I can get 2 Librarian's for 130 points and spread Inner Circle to units making them Fearless and granting Preferred Enemy Chaos so that all rolls of '1' on 'To Hit' and 'To Wound' can be re-rolled. A unit of Devastators would really like this a lot.

Summary
After all this analysis I think the tactics are becoming clear.

Deep Strike is a clear option and probably unique in its practicality to the Dark Angels. I will need to look at the composition of the Terminator squad, size, weapon choices etc but the Codex is really encouraging this approach. Any advice or thoughts are welcome.

The Librarian looks to be the best and cheapest way to spread the Preferred Enemy Chaos effect. I have not played them in the past so more research required here to understand the practical implications and again all thoughts / tips welcome.