So after the game at the weekend we had a bit of a chat about the Land Raider.

Nurgle had used the standard Land Raider and the Dark Angles had chosen the Crusader. They performed very differently in play. 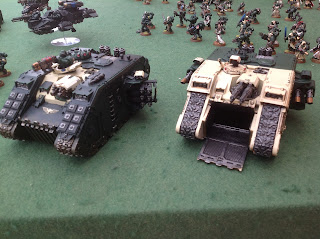 In our first game, before christmas, I had used the crusader to great effect. I launched it across the board and the Terminators came tumbling out straight into combat with the Obliterators and Zombies. The Crusader then reversed a little and offered magnificent covering fire. I had a unit of 5 plus Belial. The Crusader offers greater capacity than the standard Land Raider which can only take 5 terminators. I considered adding a Chaplain in terminator armour to max out the capacity but ..... its a lot of points in one unit.

The Nurgle force used the twin-linked lascannons to offer huge threat and then once the Land Raider had  off loaded its cargo its role was that of mobile terrain to block line of sight and generally chase my vehicles around the board. With 4 hull points it is tough to take down.

The interesting thing is that if I took the standard Land Raider I would have shooting re-rolls because it is  a Deathwing Vehicle. It is also Venerable and can force the opposition to re-roll on the armour penetration table. Very handy if you are going to play the role of mobile terrain.

It is a lot of points though and my mind is turning to deep striking as a delivery mechanism. There are lots of rule changes to reflect on and lets face it I could bring more terminators with the points saved.

There is much to ponder.

On a lighter note we have noticed that the multi melta, which I have taken in 3 straight battles, has not hit anything at all!! Incredible. He has become a laughing stock. He had at least 3 shots this battle alone. We think it is because he is having to climb outside the vehicle and fear is effecting his aim ;-)