So what did I take from the game? What worked and what can be improved?

Characters are members of the Inner Circle. This conveys benefits that pass on to the squad that they join. Inner Circle = Fearless and Preferred Enemy Chaos (re-roll any 1's for To Hit and To Wound). I would suggest taking a number of such models (particularly when facing chaos) and think about where that could really be of benefit. I only had 2 and in a 2000 point army that just isn't enough. 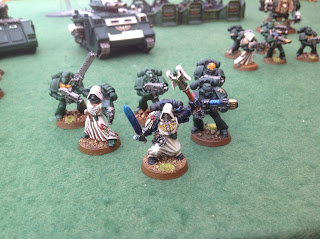 My Interrogator Chaplain had a little unit of 5 space marines with him and this helped to take down the unit of Chaos Marines. The plasma gun worked well and the Chaplain did the business in hand to hand. (despite some rubbish dice rolls when he was locked in challenge - and I am not blaming the white dice!!)

First off, I really love the model. I have a lot more painting to do on mine and I will really enjoy putting in the hours as it is 'cool' on the playing surface. In the game we have just played I sped it off down the right flank to get full benefit for the Jink saves. It caused some threat and was able to get behind a Rhino and destroy it. It was in a great position to deal with the marines had it not been mugged by the Helldrake. 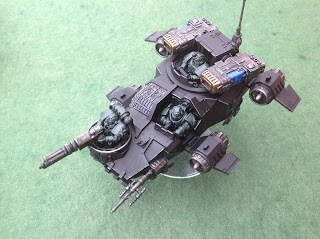 It is expensive at 140 points plus the 20 for the assault cannon. It is also easy to kill. The issue is really about getting it behind the enemy where it has access to rear armour. I notice that it can deep strike so this may be an option to consider. I also wonder how it would do with the Darkshroud in attendance. So there are options to consider for the future.

Now this is an interesting model. I do like the Stasis Bomb. I think that properly deployed it can be a real game changer. 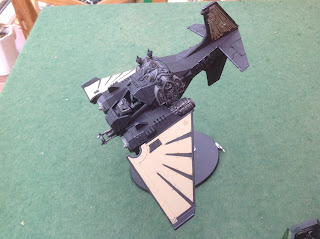 In our game it proved to be survivable - this despite the fact that it attracted quite a lot of firepower. It survived for the full game loosing 2 hull points. It is a troop killer and probably better used against lighter opposition than marines. The Hurricane Bolters did a lot of damage to the zombies (unit of 36 so a big target) as did the Rift Cannon but my view is that this is all about the Stasis Bomb. It applies huge negatives to combat units (-3 to Initiative and to WS) and this has the potential to be a game winner.

The enemy will not be fooled twice though so not a tactic that can be relied on regularly. At 160 points I think it will be an occasional inclusion - but a sweet model to assemble and paint! I still have work to do and I am looking forward to it.