A great afternoon yesterday and an introduction to a new game X-wing. Thank you Dark Templar.

It was really good fun. We played a few games in short, dynamic bursts. It really is all action, easy to get your head around and packed full of good 'gaming' moments. 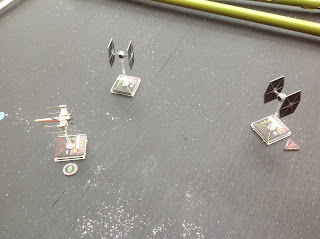 The game is very much about trying to predict your opponents move and getting into a great position to shoot. Here the 2 imperial Tie-fighters have got into a great position behind Luke. You can only fire in front so in this situation both imperial fighters are firing away and Luke is dodging and weaving like crazy. 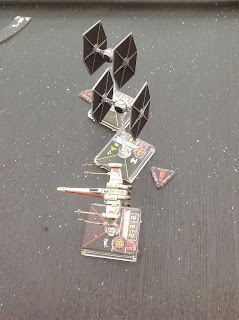 Another example of an ambush and this time the Tie-fighters had stayed together. You get bonus for being up close i.e. an additional attack. Shouts of 'use the force Luke' seemed to help the dice ;-) 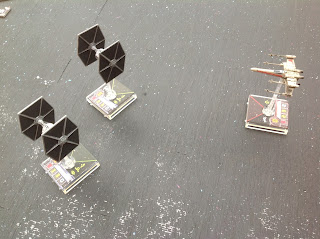 Here Luke has got a good position and has avoided the line of sight of the first fighter and has got sufficiently close to get the additional attack. Luke will be attracting shots from the second fighter but not at close range.

We had a fab afternoon and there is much more to the game than the basic version that we played. Looking forward to figuring it all out - and not a paint brush in sight!!
Posted by Bullcher Feb at 04:26