Every Speed Freak army needs a few buggies. I like to play mine with Rokkits so I substituted the Bigshootas. I think I ordered the arms of the killa kans to get the look. They are great for roaming around the battle field, swooping down the sides to get behind vehicles. The key here is to give the opposing force a huge variety of targets and get amongst 'em early. Its a full on attack attack attack mentality and when the Boyz land make sure it is in numbers and wipe the unit they hit before moving on. The impact of swarming all over the enemy like this is to force them to close ranks .... and there is a tactic to handle this behaviour, more later on that. 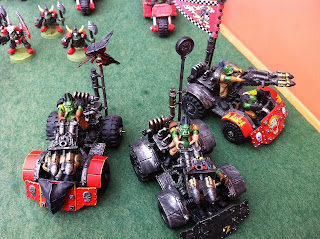 I had a particularly spectacular encounter with Tyranids  and obviously one of the Boyz couldn't resist taking a few trophies ;-)