So a few years back I had a tournament coming up and decided to field a Speed Freak army. Had some great fun testing the various options one of which was a squad of Nobs on bikes. I was imagining the carnage and thought a little converting was in order.

I kept the legs of the usual biker but replaced the torso with the standard Ork body and then repositioned arms etc to get the effect I was after. I really wanted to have one of the Orks leaning off the bike with a Choppa slicing its way through any unfortunate individuals who found themselves in the way. The results are below. 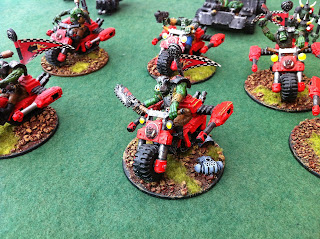 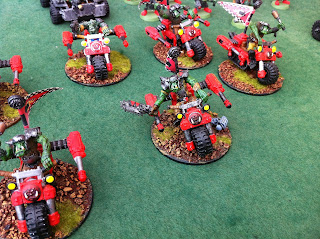 A little 'green stuff' goes a long way. I gotta tell you that these bad boyz paid for themselves and then some!
Posted by Bullcher Feb at 06:07