Well now we have just completed our first three games of Necromunda. Wow, what a blast. It was great to get back into it. 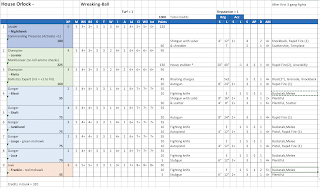 So first off I had to make some changes because at least 50% of the gang needed to be Gangers. I stayed with the two champions concept but now it was more challenging, credits wise. I also decided to take Blasting Charges. They have a bit more punch and I just was not sure what the scenarios might throw at me. They have a S5 making them the most impactful thing I have. Range is really low but still at least they are there, if needed.

I had to choose some starting Skills for my Leader and Champions. This was done in a hurry, but I like my choices.

1. My leader, 'Nighthawk' went for Commanding Presence. This allows him to activate one more person in group activation. I have learned that this can be a cool tactic in other games. When the time is right you send in a couple of guys to put someone down and then the last one does the finishing off. It can be devastating.

2. My Champion 'Leveller' has the heavy Stubber and this has Rapid Fire (2). He can be amazing but  he runs the risk of running out of ammo. A big problem to be sure. To overcome this I gave him Munitioneer. It means he can re-roll ammo checks. Anything to keep him in the game and dishing damage at distance.

3. My other Champion 'Rivits' only had a Autogun. Well I had no credits left so ..... He has a decent BS of 4+ so I thought I would boost this with Ballistics Expert which means that if he can pass an Int test he is +1 to hit. Now that is a pretty big deal!!

The Dark Templar had been busy with the scenery. I mean seriously.

This kit is from Red Beam Design and comes with magnets to hold it all together. I was seriously impressed. Really cool and very good value. I will be checking them out for sure. It was great to play on and gave the much desired height that you need in Necromunda.

There are always stories and as I look back, my Juve 'Frankio' had a great game. He was involved in everything.

The first game was a straight forward 'go at one another' game. The Dark Templar came steaming in and launched himself onto the platform with his leader and some support. Very intimidating. I sent 'Frankio' up to have a look see.

He was great. Stub gunning away. People being 'pinned'. It was just great fun. In truth he was well supported both from distance and relatively close range. Nighthawk was a beast and took out two of the opposition - DEAD. I 'bottled' early and took the victory points. Cool start.

In the pub that night the story was all about 'Frankio'.

The second game was a funny affair in that we started on top of one another, only 2"'s apart, and we were tasked with taking out a piece of enemy scenery, we used old fashioned gene stealers :-). We started with a small number on the table and then it was supposed to build with reinforcements.

Nighthawk opened up early dishing out the damage before getting hit himself. Frankio came to the rescue, again. It was cool.


However we both lost people in the first round and both failed bottle tests so the game was over before it started. Amazing!

And so to the third game. Oh wow.

The entire Goliath gang were on the assault. I had 5 sentries. The sentries were randomly moved depending on who rolled the highest dice. I mean this was mad! In the first two turn I controlled the sentries once!! I mean seriously.

I was surrounded as the Goliaths crept closer and closer. Their aim was to take down a centrally positioned structure. It was starting to look really cruel at one point and then 'Frankio' got his shit together. I had control of him twice in a row and he sounded the  alarm by facing down the opposition leader, go 'Frankio'.

The rest of the boys came running and what followed was carnage. I mean blood on the floor. The mother of all battles. The Goliaths did what they had come to do but paid a high price! We had our own troubles too. A great game full of emotion with ebbs and flows. I have missed Necrumunda and I glad it is back in my life.

There are lessons to learn and credits to spend but this is for another day.

Tonight in the pub there will be stories to be told of heroes in the field and 'Frankio' has made his name. He was first to face down the Goliaths, he was first to pin one of them, he recused Nighthawk in the second game and raised the alarm in the third. I raise a glass - to 'Frankio'!